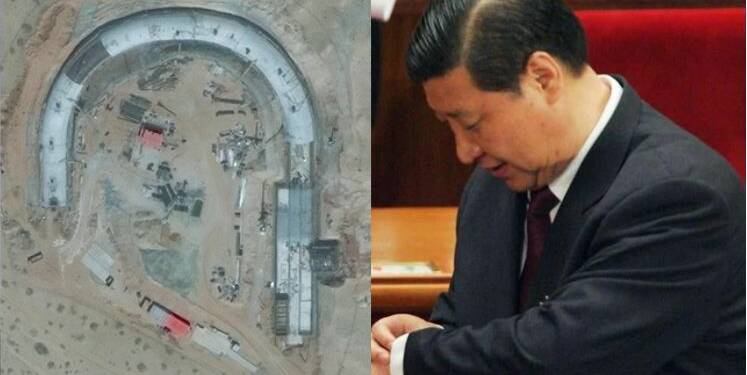 On July 1, the Chinese Communist Party (CCP) celebrated 100 years of existence. For the past 100 years, it has been oppressing, subjugating and killing Chinese people. Now, China’s thirst for blood is going global. China has grown into an expansionist beast, hungry for more and more land and sea.

To make a name for itself in today’s world, a country must fulfill two criteria. First, it should be an economic giant. On that count, China has fooled the world pretty well with its inflated economic numbers. That the reality is starkly different from what China shows has been exposed by TFI on multiple occasions.

Second, a country must have a powerful military. But here’s the deal. China’s military is full of wimps and “little emperors”. Yet, China needs to desperately fool the world with its might. So, just around the time, the CCP was celebrating its centennial anniversary, reports began doing the rounds claiming China was building 100 new silos for intercontinental ballistic missiles (ICBMs) in a desert near the country’s northwestern city of Yumen, signalling a supposed major expansion of its nuclear capabilities.

The James Martin Center for Nonproliferation Studies in Monterey said the 119 construction sites in Gansu province were similar to existing Chinese launch facilities for nuclear-tipped ballistic missiles. As reported by the Washington Post, the silo construction project could provide China means of concealing its nuclear weapons as part of the United States’ “shell game” strategy employed during the Cold War with the Soviet Union.

The “shell game” strategy entails building large facilities with multiple missile silos. However, ICBMs are not stored in all the silos. Instead, many silos are either kept empty or filled with duds. This means that the enemy looking to neutralise the nuclear threat posed by China will have to employ large-scale firepower to destroy all silos – since it cannot be sure of where the missiles are actually placed. And missing even one target can be devastating.

Missile silos are concrete underground facilities used to mostly store missiles and ICBMs – especially if they are nuclear powered. ICBMs – as we all know, are intercontinental ballistic missiles used for nuclear warhead delivery. China has around 250 to 350 warheads, and therefore, for it to construct over 145 new missile silos across the mainland makes no sense – since it does not have the required material to weaponise these missiles with.

China wants to scare the world. And to an extent, it has been successful. But, we at TFI, can see right through the lies of China. The paper dragon excels in psychological warfare. And the latest news of it making hundreds of new ICBM silos is just another desperate attempt to convince the world community of China’s power.

ICBMs once launched enter the earth’s lower orbits, where they reach their highest speeds before entering the atmosphere once again, at which point they disintegrate to cover a large area to be targeted and destroyed. But the crux remains that what lands on the surface must be lethally powered by a nuclear warhead. And China does not have enough of those, making the construction of new silos nothing more than an advanced attempt at scaremongering the world.

Meanwhile, if China is planning a largescale nuclear proliferation programme – it would be digging its own grave. The international sentiment is heavily weighed against China, and the paper dragon making moves to exponentially increase its warheads will inevitably lead to a breakout of hostilities – which China is not in a position to sustain. China will be in a much better position if it keeps those silos empty because if it begins filling them, the world will unite under one umbrella to destroy China.

Due to the empty ICBM silos, when push comes to shove – the reality is, China will not be in a position to strike back at its enemies at a scale it would have ideally wanted to. This is China’s classic case of barking way too much, but chickening out when the time comes to bite.