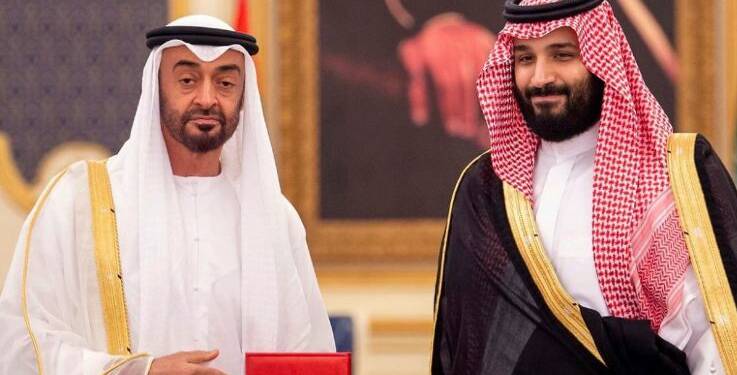 The Saudi-Emirati fight is finally out in the open. It has been simmering for a long time now. Saudi Arabia and the United Arab Emirates (UAE)  – known as close allies, have hit a collision course. Interestingly, this is not the first time the two are diverging from each other, but it is hands down the most public spat the two have ever had. As the world economy recovers from the devastation caused by the Covid-19 pandemic, oil demand is rising. The Organization of the Petroleum Exporting Countries (OPEC) is the undisputed controller of oil supplies around the world, and also massively impacts oil prices.

OPEC – as a tradition, relies on unanimous decision making. That tradition was broken recently as the UAE stopped succumbing to pressure from Saudi Arabia to prolong the gradual uptick in oil supplies throughout 2022, instead of the planned lifting of all oil export caps in April next year. Saudi Arabia supports a plan for OPEC producers to increase oil output in stages by a total of two million barrels per day (bpd) from August through December 2021 and extend remaining cuts until the end of 2022 instead of letting them expire as planned next April.

UAE, however, demanded that its own production quota be revised upward, a move that would allow it to increase output further. While the UAE said it could support raising production to two million bpd through the end of the year, it said extending a cut in output beyond April would be “unfair to the UAE.” Abu Dhabi aims at selling as much oil before 2030 – when oil demand is expected to plateau, and utilise the resultant financial gains to further propel its massive economic diversification plan.

The de facto leader of OPEC – Saudi Arabia, on the other hand believes that large hikes in oil output now could put downward pressure on prices, stifling investment and leading to supply issues few years down the line. The Wall Street Journal reported that the U.A.E. would agree to the plan of OPEC+ only if it can boost its own output inside the group’s complex quota system. Saudi Arabia has so far refused that concession.

Oil is merely the latest sparring point between the two Arab allies – who have historically cooperated with each other on a multitude of issues – very often setting an example for the world community to emulate. The United Arab Emirates, however, realised early on that its oil-dependent, single sector economy was merely a temporary boon and that in the long run, it would turn into a bane. So, the UAE started work on a comprehensive economic diversification plan before any other Gulf state even thought of the word ‘diversification’.

Today, the UAE’s far-sightedness is bearing results. Arab states, including Saudi Arabia have also realised that depending solely on oil can be catastrophic for them in the long run. So, they too are trying to catch up with the UAE. And that is proving to become the cause of many conflicts between the two sides.

Saudi Arabia has been locking its horns with the UAE on a very frequent basis of late, and Abu Dhabi is not impressed. Last month, for instance, Saudi Arabia became one of the nations that said it would not recognise COVID-19 vaccination certificates of China-made jabs even though Sinopharm and Sinovac are registered with the World Health Organization (WHO). The jabs recommended in Saudi Arabia for use are the ones made by Pfizer, AstraZeneca, Moderna, and Johnson & Johnson.

It is no coincidence that UAE too has been using Chinese vaccines against Covid-19, and that this decision of Saudi Arabia impacts Abu Dhabi and its people as well.

An airbase on a volcanic island off Yemen called Mayun, being built secretively reportedly by the UAE, has also become a point of contention between Riyadh and Abu Dhabi. Interestingly, no country has claimed the Mayun Island airbase in the Bab el-Mandeb Strait. According to Al Jazeera, however, shipping traffic associated with a prior attempt to build a huge runway across the 5.6-km (3.5 miles)-long island years ago links back to the United Arab Emirates (UAE).

Even officials in Yemen have admitted that the UAE is building the secret airbase. Out of absolutely nowhere, the Saudi-led coalition in May this year announced it had established a presence on a strategic island at the entrance to the Red Sea to counter perceived threats to maritime trade from the Iran-aligned Houthi movement. The statement was issued in response to an Associated Press report citing Yemeni officials saying the United Arab Emirates was behind the construction of the Mayun airbase.

Read more: We may see a UAE vs Saudi Arabia for Arab world leadership soon as Saudi is still being dragged down by radical elements

In 2019, the UAE had withdrawn from the Saudi-backed coalition fighting a war in Yemen against Iran-backed Houthis. The UAE does not want to involve itself in wars. It seeks stability and security for itself alone. By emerging as a diverse economic powerhouse, free from the influence of the rigid Islamic clergy, UAE wants to be counted among modern, liberal, and developed societies of the world. Its vision is starkly different from that of Saudi Arabia and other Gulf states, which are engulfed by a toxic theological and clerical obsession.

The UAE has emerged as a cosmopolitan, business-friendly, and investment-worthy country in a remarkably short span of time. The UAE’s trajectory is quite different. Its well-thought, strategic, and timely reforms will ensure that in a fight with Saudi Arabia for the Arab crown, Abu Dhabi wins effortlessly.