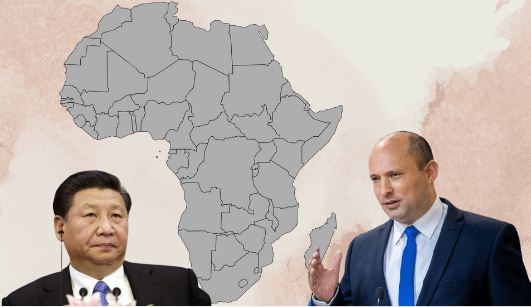 After nearly two decades, Israel has once again entered Africa – officially so. It was in 2002 that the former Organization of African Unity dissolved itself and reconstructed what is today known as the African Union (AU) – the main political, economic and diplomatic union of African nations. The entry of Israel into the African Union marks the end of heavy diplomatic overtures being carried out for quite some time now. Especially under the Netanyahu administration in Tel Aviv, Israel has been vigorously pursuing enhanced diplomatic ties with as many African nations as possible. Now, the entry of Israel as an observer to the African Union could spell worries for China.

China’s debts and investments in the African continent have been turning sour. Chinese ambitions of colonising the continent too, as a consequence, are taking a massive drubbing. For years now, Xi Jinping has been eyeing Africa and its resources, but the countries of the vast continent are no novices. They know when they are being prepared for exploitation. Therefore, Israel’s entry as an observer to the African Union becomes all the more important – given China has been pursuing an anti-Jewish and pro-Palestine agenda since the Israel-Gaza war.

Speaking about the landmark development, Israeli Foreign Minister Yair Lapid said, “This is a day of celebration for Israel-Africa relations. This diplomatic achievement is the result of efforts by the Foreign Ministry, the African Division, and Israeli embassies on the continent.” He added, “This corrects the anomaly that existed for almost two decades and is an important part of strengthening of fabric of Israel’s foreign relations. This will help us strengthen our activities in the continent and in the organization’s member states.”

Read more: China decides to stop investing in Africa because Africans take money and that’s pretty much it

Israel has diplomatic relations with 46 AU member states. Israel re-established relations with Guinea in 2016 and with Chad in 2019. In October 2020, Israel also signed a normalization agreement with Sudan. According to the Times of Israel, in July 2016, Netanyahu became the first Israeli premier in decades to travel to the continent when he visited four East African nations: Uganda, Kenya, Rwanda and Ethiopia.

By eyeing Africa, Israel is looking to create new markets for its agricultural produce, and of course, defence and security weapon systems as well. Africa can also benefit immensely by getting access to high-end Israeli technologies cutting across sectors. With the same in mind, in December 2016, Israel hosted seven ministers and many other top officials from over a dozen Western African countries at an agricultural conference in Israel, which was co-sponsored by the Economic Community of West African States (ECOWAS) and Mashav, Israel’s Agency for International Development Cooperation

Israel still does not have diplomatic ties with Comoros, Djibouti, Libya, Mali, Mauritania, Niger, Tunisia, Algeria, Libya, and Somalia. With all other countries of the continent, Israel either has full-fledged bilateral ties, or at least has functional diplomatic relations. With its induction as an observer state at the African Union, however, Israel will get direct access to the continent which is increasingly being eyed by many powers. Tel Aviv will get the chance of increasing the volume and quality of its ties with African nations – and the single focus would remain on countering China.

Read more: Africa played China like a pro and set up a great precedent for the rest of the world to follow

Israel’s ties with Africa are continuously on the rise. Only last year, as said earlier, Israel and Sudan signed a normalisation-of-ties agreement as a part of the larger Abraham Accords that were brokered across the Middle East and North Africa. Already, Israel has good ties with the predominantly Christian and peaceful countries of Africa. With the Arab, Muslim nations as well, Israel is now looking to step up its ties. Apart from Sudan, even Morocco signed a full normalisation deal with Israel last year. Egypt and Israel have a peace deal which dates back to 1979.

Africa is becoming a region of intense powerplay between strong powers of the world. With the United States’ influence in the continent waning, Russia has been making some heavy inroads into Africa. France and Russia are themselves competing with each other for primacy in the continent. And then there is China – which is eyeing the continent’s tremendous untapped resources. With its neo-colonial Belt and Road Initiative (BRI), China is not only debt-trapping many countries in Africa, but is also colonising them with the intention of enslavement.

China eyes Africa for its labour – which it considers cheap, or even more horrifyingly, free of cost. However, Chinese designs have been facing remarkable resistance in Africa, with countries refusing to pay their debts to Beijing and also refusing to part with any strategic assets which China would ideally want to fill its hands with.

Now that another player in the form of Israel has entered the powerplay in Africa, the legroom for China to play the bully will further shrink – and it will be forced to leave the continent – ashamed and defeated.