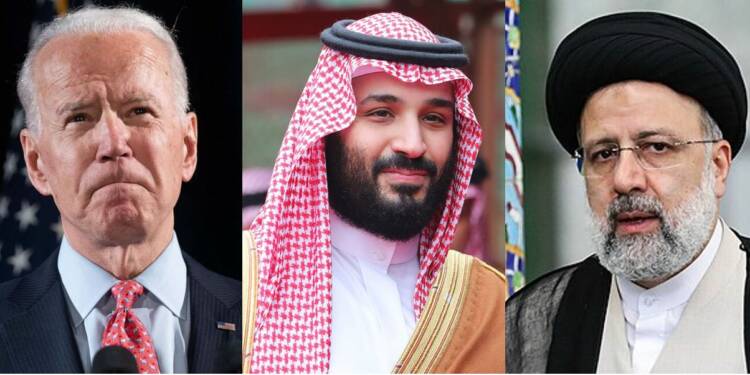 With a crisis in the world comes enormous opportunity for those supplying armoury to the battling nations. West Asia’s myriad conflicts have proven to be a great cash churner for the iniquitous Military-Industrial Complex of the United States. President Joe Biden, whose foreign policy is extremely influenced by the Military-Industrial Complex, has now stepped up its efforts to hand over a much-needed respite to the sulking Defence industry mired after Donald Trump’s tenure that witnessed a major plunge in the conflicts all over the world. The ongoing peace talks between Iran and Saudi Arabia could fall prey to Biden’s ill-thought actions.

Read More: And when we thought it was all over, Biden unveils his plans to bomb Afghanistan more

Make no mistake, Iraq is a client state of Iran that has for long demanded the drawdown of the American troops from the country. Therefore, America’s recent decision will surely bring immediate relief to combating Iranian militias in the region. Iraq serves Iran’s major interests in the region. Iran not just benefits from overland trade with Iraq but the former also exerts substantial influence over Iraq’s energy sector that has, at times, helped Iran overcome its financial distress. Now, Biden’s decision will help Iran in furthering its interests in the country which is further going to set the alarm bells ringing for Saudi Arabia and the UAE.

Iran is under a lot of duress, the economic situation is getting from bad to worse, the sham elections and the regime’s inability to provide basic amenities like fresh water to its people is leading the country to implode from within. Also, the regional security situation has turned extremely vulnerable with the rise of the Taliban in Afghanistan. Resultantly, a sulking Iran is desperately looking to strike a peace deal with Saudi Arabia so that it can sort out its problems.

As it was revealed in May, Saudi Arabia and Iran are engaged in official (peace) talks, and reportedly two rounds of negotiations have already been held in the Iraqi capital city of Baghdad. As the peace talks trudge forward, Saudi Arabia is also expected to attend the swearing-in ceremony of the Iranian President-elect Ebrahim Raisi next month. Iran has realized that normalizing relations with its top rival Saudi Arabia is a prerequisite to ease its economic distress.

Iran and Saudi Arabia are West Asia’s two staunch rivals. The ongoing tensions between these two states keep the whole region on a constant boil. The turbulence in the region simply helps the infamous Military-Industrial Complex to make the maximum out of these conflicts. Unsurprisingly, the USA’s share of total arms sales from the Top 100 arms companies in the world stands at 59 percent. These conflicts help the USA’s lawmakers and defence contractors to justify enormous amounts of taxpayers’ money being spent on weapons contracts. This simply implies that if the two staunchest rivals in the Western Asian region manage to normalize their relations with each other, the Military-Industrial Complex would be the one to suffer the most.

The controversy surrounding President Joe Biden’s nomination of retired Army Gen. Lloyd Austin to be the secretary of Defense further cemented the fact that Biden’s 4-year tenure is going to bear enormous fruits for the Military-Industrial Complex. After his retirement in 2016, Austin served on the boards of Raytheon Co., a major defence contractor, and steel producer Nucor Corp.; two beneficiaries of military expenditures. Hence, one would never expect Austin to endorse anything that puts Military-Industrial Complex’s interests at risk.

The recent decision to curb the USA’s combat mission in Iraq is a stride forward in this direction only. The idea is to provide more leverage to Iran over Saudi Arabia that bears the potential to even jeopardize the ongoing talks. Saudi Arabia will find itself in hot waters if it gets to confront a more emboldened Iran on the negotiating table.

The fact that Trump’s era ended up without embroiling the USA in new wars dealt a huge blow to the money-making mechanism deployed by the Military-Industrial Complex. Before Trump, it was Barack Obama who lavished taxpayers’ dollars to the defence contractors in abundance. He launched airstrikes or military raids in at least seven countries: Afghanistan, Iraq, Syria, Libya, Yemen, Somalia and Pakistan.  Now, with Biden at the helm of the affairs, the infamous alliance of defence and military establishment has again sprung into action.