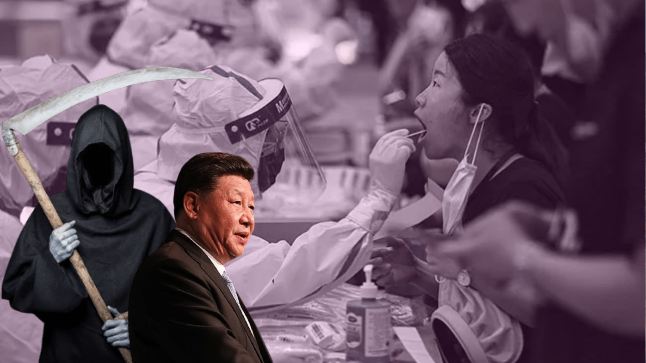 China has been exhibiting traits of schadenfreude for a long time now. Especially after claiming a false victory over Covid-19 last year, China has been looking down on countries around the world still battling the pandemic which was first reported out of China. The Communist nation has touted itself as a role model for other countries on how to control the pandemic, although the free world has shown little to no interest in learning anything from China – rightfully so. Now, Covid-19 is back in China, and the Delta variant of Coronavirus is ravaging mainland China. The country is now facing its most extensive outbreak since early last year.

The spiralling of Delta variant Covid-19 cases in China can spell doom for China. The Chinese Communist Party on July 1 celebrated 100 years of existence. That means it celebrated 100 years of brutalising and tormenting ordinary Chinese citizens. Now, there is a good chance that the CCP will not be able to celebrate its next birthday, and will be dumped in the trash can by the Chinese public in the next one year.

There are multiple reasons why the CCP’s fortunes can take a downward turn here on. The Delta variant is known to spread like wildfire. Already, mainland China seems engulfed with the new Covid-19 variant. Most previous outbreaks didn’t spread far beyond a city or province. This time, cases have been confirmed in more than 35 cities in 17 of mainland China’s 31 provinces and regions. While the total number of ‘official’ cases is still in the hundreds, they are far more widespread than anything China has dealt with since the initial outbreak that devastated it in early 2020.

A rattled China is now swooping in to force its citizens to undertake testing. Wuhan city will test its 12 million residents for the coronavirus after confirming its first domestic cases of the highly transmissible Delta variant. Several provinces and cities including Beijing are rushing to test millions of people. The flood-ravaged province of Henan is also battling a surge in cases. Zhengzhou, currently under lockdown after floods that killed hundreds of people will carry out nucleic acid tests for all on the first, fourth and seventh days after the lockdown.

China’s National Health Commission (NHC), in its daily report on Tuesday, said that 61 new locally-transmitted Covid-19 cases have been reported from different provinces, including Jiangsu, Hunan, Hubei, Henan, Yunnan besides Beijing, Shanghai and Fujian. On Wednesday, China reported an additional 71 Covid-19 infections. On the same day, China temporarily suspended issuing entry and exit documents for all non-essential and non-emergency travellers. Also, the local governments have advised citizens to not leave their regions unless there is an emergency.

Additionally, all residents of flood and pandemic-hit Zhengzhou need to show a mandatory negative Covid test to leave the city. Nanjing and Yangzhou have suspended all domestic flights. The capital city of Beijing has suspended 13 rail lines and stopped all inbound long-distance ticket sales from 23 stations.

China has failed. It failed last year as well, and had to lie to its people and the world regarding its handling of the pandemic. After having claimed a false victory over the virus, the Chinese Communist Party went on a year-long rant to preach its model around the world, subtly telling the democratic world to learn from its successes.

Read more: China is finally in the firm grip of the very virus it exported to the whole world

It must be remembered that China has fully vaccinated 40 per cent of its population. Yet, if the CCP is now locking down entire cities, carrying out mandatory mass testing, banning travel and engaging in a propaganda blitzkrieg, rest assured, the situation is far worse than China wants anyone to believe. China will once again, in order to cover up the real extent of the damage being caused due to the Delta variant, be forced to lie and fudge data.

In the Philippines, the name of vaccines is being hidden from citizens so that they do not protest receiving the Chinese vaccine. During the vaccines trials as well, in countries like Turkey and Brazil, the Chinese candidates proved to be an unmitigated disaster. China was then, as expected, forced to fudge vaccine efficacy data to save face.

Such has been the level of China’s lies to its own people and the world that the country’s top Covid-19 task force constituted last year did not have scientists. Instead, this task force, called the “Central Leading Small Group for Work to Counter the New Coronavirus Infection Pneumonia Epidemic” had members of the CCP’s Politburo or Central Committee, with an eerie composition of individuals with an expertise on ‘propaganda’. In any normal country, this task force would have been comprised of scientists and doctors. In China, it was comprised of CCP’s propaganda experts, and Xi Jinping chose to stay away from the same, in fear of not being seen as the poster boy of China’s failure to handle the pandemic.

The people of China know the CCP’s modus operandi all too well. Therefore, now that the Delta variant is beginning to ravage China – and will soon spread its tentacles across the mainland with scant regard for any urban or rural realities, frustrated Chinese people will rise up against the CCP and oust it from power. In 1989, the CCP carried out a horrifying massacre of protestors at the famed Tiananmen Square. That uprising was crushed, because it was largely focused around one area. What China has to potentially face now, however, is a nationwide uprising against the CCP which will be impossible to subdue. This is going to ring the CCP’s death knell, which has been having it too good for too long now.