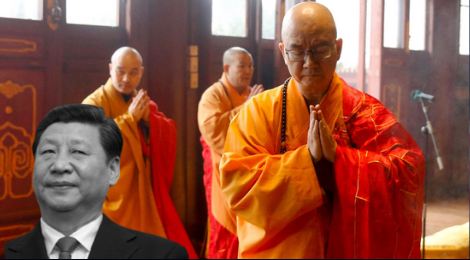 Religion faced obliteration in China during the decade of the Cultural Revolution from 1966 to 1976. Temples, monasteries and almost every religious site was either locked down or destroyed. There was a complete purge of religion and spirituality out of the Chinese people’s minds. Chinese religious beliefs were nearly eradicated for being a relic of the country’s imperial past. Confucianism, Buddhism and Taoism were replaced by a cult-like following of Mao Zedong – the mass murderer who for some strange reason is hailed as a revolutionary in China. However, since the 1990s, religion has been making a comeback in China. Although heavily censored, religious practices have nonetheless been resuscitated to a degree.

A 2020 study by the Pew Research Center found that 48.2 per cent of China’s population had some form of religious affiliation. These results suggest that many Chinese participate in various activities which can be labelled religious. Therefore, it can be said that about 50 per cent of the Chinese populace is not ‘atheist’ per se, and hence, does not conform to the CCP’s policy of rejecting all religious paths and the concept of God as dogma. This is half of China not conforming to a fundamental pillar of the CCP, which is why Xi Jinping feels threatened.

Of late, Xi Jinping has been trying to project himself as someone who is not against religion or spiritual thought and is willing to allow various faiths some freedom in China, with a caveat, of course. Religious leaders must conform to the ‘ideals’ and beliefs of the Chinese Communist Party, and not promote dogmatism. In line with the same, on his recent visit to Tibet, the first site he visited in the capital Lhasa was the Drepung Monastery, a major school of Tibetan Buddhism. Xi was welcomed by monks who presented him with a traditional Tibetan hada – a white silk scarf given as a show of respect – before he gave a speech on the importance of sinicising religions.

The visit to the monastery was an olive branch extended by Jinping to religious leaders with a message which read – the CCP and religions of China can coexist, so long as the religions and their leaders follow the Communist ideology and propagate it far and wide. To the same effect, on May 1 this year, China came up with a policy titled, “Measures on the Management of Religious Professionals,” which stated that the preaching and teaching by religious professionals must in no way endanger China’s national security, promote extremism or divide the country.

The CCP’s diktat also required religious professionals to resist the infiltration of foreign forces through religion. Religious leaders who violate the new decree will be subject to administrative sanctions and criminal charges. Religious leaders command respect in China – much more than the CCP does. With about half of China identifying itself as religious, Xi Jinping realises the potential leaders of various faiths have to mould public opinion in the CCP’s favour – at a time when it is nosediving.

Read more: Et Tu, Pope? Christians of China are suffering but the Vatican is busy blessing the Chinese Communist Party

According to the Voice of America, the CCP’s decree, which came into effect in May this year coincided with a push by the CCP-controlled national religious associations of Protestantism, Catholicism, Taoism, Buddhism and Islam to require all believers to study topics such as the histories of the CCP, the People’s Republic of China and socialism to mark the 100th anniversary of the CCP.

As early as 2017, Xi emphasized that the CCP would “provide active guidance for religion and socialism to coexist.” Xi Jinping had endorsed continued party tolerance for religion as filling a “moral void” that has developed amid China’s economic growth. He had, back then, understood how religious institutions could in fact, be subverted and used as CCP indoctrination camps. Therefore, China has gone on an overdrive to force religious leaders to conform to the CCP’s ideals, and propagate the same to their followers.

Religious leaders of China, by virtue of their influence, cannot just be used by Xi Jinping as proponents of the Communist ideology. They can also, in the near future, turn against the CCP and campaign against the ruling regime in China. They will thus, through their sermons, wield the power to influence public opinion against the CCP. This is what really spooks Xi Jinping, which is why he is trying to co-opt such leaders first before they discover a dissentious drive for themselves.

Subconsciously, Chinese people will now be forced to get in line with the CCP’s murderous and brutal ideology, because it has been shoved down their throats by religious leaders who are surviving purely at the mercy of Xi Jinping and his lackeys.