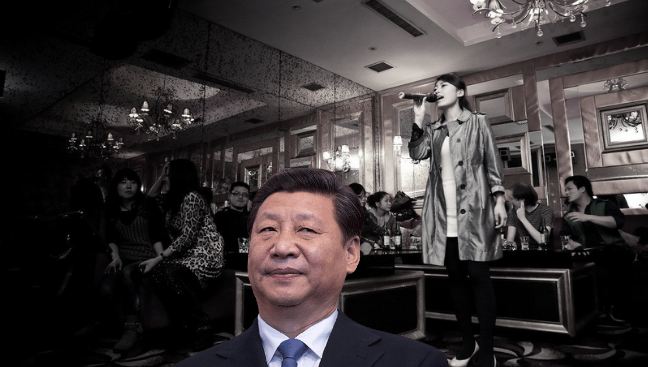 It is the season of bans in China! Under the Chinese Communist Party of General Secretary Xi Jinping, anything under the sun can be banned. Businesses, private education, religion, video games, startups, and now, karaoke songs – they can all be banned anytime. Therefore, in another massive show of strength against his own people, President Xi Jinping has decided to ban karaoke songs which harm national unity, sovereignty or territorial integrity, endanger national security or harm national honour, incite ethnic hatred or undermine ethnic unity, violate religious policies, promote illegal activities like gambling or drugs, or run “contrary to public morality.” Essentially, only patriotic songs dedicated to the CCP and Xi Jinping’s greatness will now be allowed in China.

China boasts of some 50,000 karaoke bars, which tend to be equipped with songs from a catalogue of over 100,000 songs. Since the karaoke “blacklist” is not out yet, it is not known how many songs will eventually remain permitted for karaoke venue owners to play on their premises. What Xi Jinping is doing is very simple. He is taking out whatever little fun remains in the lives of Chinese people. The leisure time of Chinese citizens is being walked upon. The CCP has already begun telling what the people of China should sing and listen to. Next, they will tell people what to eat and what to wear as well.

China’s karaoke bars were among the very few things in the country which gave its people some sense of being alive and happy. By banning unpatriotic karaoke songs, Xi Jinping has snatched even this ‘luxury’ from his people. The new rules, which come into effect on October 1, are described as necessary to “promote socialist core values” as well as “maintain national cultural and ideological security.” Karaoke venues will themselves be responsible for censoring the music and videos they play. CCP officials will conduct spot checks for compliance, and violations will be reported to no less than the national level.

Read more: ‘Support the CCP or we will ban you,’ Jinping’s message to religious leaders in China

This is not the first time that the Chinese Communist Party has come cracking down hard on music. In 2015, close to 120 songs were banned, 20 of which belonged to subversive underground Chinese rap group In3. Around 6 songs belonged to Taiwan’s MC HotDog. Among the songs which were banned were, “Hello Teacher,” “One Night Stand,” “Don’t Want to Go to School,” “I Love Taiwanese Girls,” “Suicide Diary,” “I Want to Kiss Your Mouth in the Dark,” “No Sex, No Love,” “Beijing Hooligans,” “Fuck” and “Fart.”

Today, Chinese karaoke bars have come to gather an extensive collection of American rap and pop music that employ obscenities or could easily be deemed by the CCP as glamorizing and promoting “illegal activities.” For the CCP, a vibrant pop culture which relies heavily on ‘Western’ music and art is no less than an existential threat. What’s worse for it, the Chinese people seem to love such songs. It is the fascination of the Chinese populace towards such songs which has forced the CCP to ban them. Had nobody been interested in such songs, Xi Jinping and his lackeys would not be terrified by them. However, ordinary Chinese people – frustrated with the CCP regime cannot stop singing these songs.

The CCP has come to feel tremendously threatened by songs – especially those which people use as a support system to further their uprising against the regime. Take for example songs like “Umbrella Revolution” and “Do You Hear the People Sing?” These were songs which pro-democracy protestors in Hong Kong blasted right into the CCP’s ears.

Today, China is grappling with what is seen by the Communist party as a menace. For a man who spent his youth working menial jobs in the Chinese countryside after his father was incarcerated by chairman Mao Zedong, Xi Jinping hates the sight of Chinese people enjoying themselves. He expects them to lead a disciplined and boring life. They must work hard, remain loyal and work tirelessly – that’s just about it. Leisure has no space in the Chinese Communist dictionary. Therefore, after robbing the Chinese tech sector and crushing the country’s EdTech sector, the CCP – led by Xi Jinping had recently turned its devilish eyes towards online video gaming.

Now that video games have been dealt with, China is cracking down on karaoke bars and songs. The atmosphere in China is that of crackdowns. The practice is trending in the Communist nation, and the CCP might just be stretching its luck too far now.