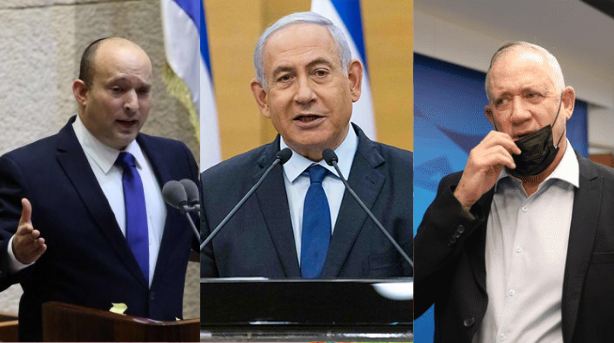 The Jewish state of Israel is essentially being run by two parallel governments operating out of Jerusalem. Alongside Prime Minister Naftali Bennett, defence minister Benny Gantz is also flexing his muscles by overruling the prime minister’s reservations about the government’s engagement with the Palestinian Authority.

Many right-wing supporters of the Naftali camp are now accusing Gantz of running a parallel government within the government. Both the leaders have so far successfully managed to prevent the differences reflect upon the coalition; however, a rise in intra-alliance tensions could very well pave the way for former Prime Minister Benjamin Netanyahu’s return to power.

Bennett and Gantz are at loggerheads over Israel’s approach towards reaching a political settlement with the PA. Recently, Bennett accused Gantz of approving the construction of 1,000 Palestinian homes in the Israeli-controlled Areas of the West Bank.

The allegations revealed how Gantz chose not to consider Bennett’s approval before giving his nod to the controversial decision. The tensions between the two leaders also ran hot last week when Benny Gantz went on to engage the PA leader, Mahmoud Abbas, despite the PM expressing his grave qualms beforehand.

Israel’s Defence Minister Gantz met Abbas on Sunday in the West Bank city of Ramallah. During the meeting, Gantz and Abbas discussed a range of issues. Gantz’s office said that the meeting focused on “security policy, civilian and economic issues.”

In a nutshell, Israel’s Palestine policy is being led by defence minister Benny Gantz and that too without Bennett’s consent. However, there is essentially nothing that Bennett could do to rein in Gantz’s diplomatic strides in Ramallah. Bennett needs Gantz’s support in keeping his prime ministership intact.

The recent developments in Israel have made it more than clear that the coalition government in Israel is living on a borrowed time and any tension among the alliance partners could very well eventuate into yet another political crisis for Israel.

However, a political crisis could serve Benjamin Netanyahu a fortune moment to mark his re-entry into the power game in Jerusalem. Former Israeli Prime Minister Benjamin Netanyahu is working tirelessly. He is reportedly not even leaving the parliament of Israel (Knesset) these days and stays up until late night working on behalf of the opposition which has begun giving hell to the ruling Naftali Bennet-led ‘Change’ government.

Those following Israeli politics are realising that Benjamin Netanyahu is getting ready to return to power as soon as possible. Elections in Israel – as has been established multiple times now, can take place at very short notice, and therefore, when they do, the former Prime Minister wants to be ready.

Since losing the Prime Minister’s post to Bennet, Netanyahu is following a carefully orchestrated schedule of visits to all the Likud strongholds. They are places where people still refer to him as prime minister and are anxious to see him back in the office.

According to the Al-Monitor report, people in such strongholds – which Netanyahu is now canvassing, do not identify in any way with the current government. For these hardcore Likud supporters, the Bennett government is “detached,” “elitist” and even “illegitimate.”

Netanyahu is plotting his return to the fray for quite a long time now. He is hunting for the best opportunity to take down the fragile coalition government. The recent tensions between the Israeli Prime Minister and Defence Minister could be instrumental in Netanyahu’s return.

The fragile government in Jerusalem is fast losing its sheen. Right-wing supporters of PM Bennett look askance upon how the administration has developed sympathies for Islamists and leftists of the country. The Bennett administration is jeopardizing Netanyahu-era Abraham accords by backing off from bilateral deals earlier agreed upon.

Moreover, the Bennett administration is also splashing largesse over Gaza by extending the fishing zone harnessed by Hamas terrorists. Bennett supporters are increasingly feeling betrayed over his softened approach towards Hamas and its sympathizers back home.

Another political crisis could prove to be a catastrophe for already fragile political stability in Israel; however, the ongoing jostling between Bennett and Gantz could render Netanyahu an auspice for making a re-entry into the power game of Jerusalem.

A military coup in the US is unthinkable right? It’s not