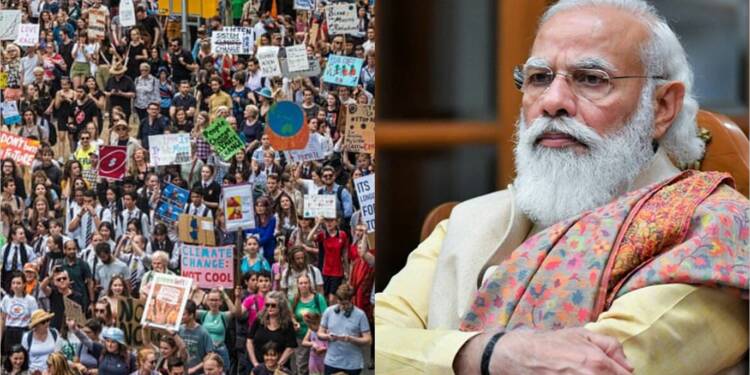 Eco fascism is a global menace. Small little NGOs coming together to cripple a country’s growth is not particularly unheard of. Across the world, climate activists, who we like to refer to as environmental fascists are resorting to anti-democratic machinations. They are telling people how they should go about leading their lives. These individuals and groups, comprising largely of school dropouts and junkies are hell-bent on derailing the economies of major countries. What’s worse, they make use of pseudo-science to prove a point. Governments across the world have scratched their heads on how to tackle these creatures, and now, India, led by Prime Minister Narendra Modi, has set an example for the world.

What all countries lack is a decisive leader who has the courage to stand up to NGOs and climate eco-fascists, even while he may himself come out looking bad at the end of it. PM Modi, however, has grabbed the bull by its horns and is also looking heroic while at it. PM Modi has given the entire world a lesson. He has set a precedent, which, if emulated by world leaders, will help them take on eco fascists with relative ease.

What Has India Done?

The Modi government has moved to restrict the funding for a group of ten American, Australian and European NGOs dealing with environmental, climate change and child labour issues. According to The Hindu, NGOs included in the recent blacklist are the European Climate Foundation, the Omidyar Network International, the Stardust Foundation and Humanity International from the U.S.; the Walk Free Foundation and the Minderoo Foundation from Australia; the Children’s Investment Fund Foundation, the Freedom Fund, and the Laudes Foundation from the U.K.; and the Legatum Fund, based in both the U.K. and the U.A.E.

What it means to be on this list is “as and when the foreign donor wants to transfer the money to some recipient association in India, the same needs prior clearance of Ministry of Home Affairs (MHA).” So, this is actually as good a step as voiding the NGOs’ India operations as a whole. Rest assured, the Ministry of Home Affairs, controlled by PM Modi’s closest aide – Amit Shah will not grant clearance to any foreign donor willing to transfer funds to the listed NGOs. That’s the entire point of this exercise!

Meanwhile, the Indian home ministry has over the past one-and-a-half months suspended the foreign funding licence of six NGOs, which include Islamic charities and others allegedly linked to religious conversion or funds misutilization, citing violations of Foreign Contribution Regulation Act, 2010 (FCRA).

Effectively, the Modi government has crippled eco-fascist NGOs, and those trying to wage a cultural war on India. They have been choked dry of funds, making operations in the country close to impossible. The Modi government has seen first-hand how these NGOs and vested interest groups can derail India’s growth and developmental trajectory, while also stalling projects of national importance. Therefore, the Prime Minister does not want to leave any vacuum for these NGOs and eco-fascists to operate out of.

A Lesson for the World

Prime Minister Narendra Modi has taught the world a great lesson. The threat of eco-fascists must be immediately neutralized. And by cutting funding for climate vigilante and far-left groups, PM Modi has ensured that their very roots in India are uprooted. President Joe Biden of the United States is currently pursuing a toxic and radical climate agenda, which promises to undo all the progress America has made so far. Biden is well poised to turn the clock back by many years for the United States, and he is actually acting at the behest of powerful eco-fascist and climate vigilante groups who hold sway over the Democratic party.

Biden had unveiled his infrastructure bill, which in the infra garb, is Alexandria Ocasio Cortez’s Green New Deal. In order to sustain this $2 trillion green infrastructure bill, the Biden administration even moved with a proposal to raise the corporate income tax rate to 28% from 21%. Shortly after coming to power, Biden passed a blanket order that banned new oil and natural gas leases and drilling permits on federal land and in federal water for 60 days. The US President has crippled the oil and natural gas industry, but there was simply no plan in place to create a parallel green industry that could absorb job losses that are bound to take place in the fossil fuels sector. Most recently, Joe Biden seems keen to rescind the Trump-era steel import tariffs, which will have negative consequences for the U.S.’ domestic steel industry.

India is committed to the welfare of the planet. Perhaps, there is no other country that is working as hard as India to inhibit the spiralling issues of global warming and climate change. PM Modi is personally pushing for greater acceptance and usage of electric vehicles, and a few years down the line, EVs will surely dominate Indian markets. India is also working hard to fulfil its energy needs using renewable sources. India is the world’s third-largest consumer of electricity and also its third-largest renewable energy producer with 38% (136 GW out of 373 GW) of total installed energy capacity in 2020 coming from renewable sources.

For his commitment to the planet, in 2018, PM Modi was even awarded the Seoul Peace Prize. Effectively, the Indian Prime Minister has struck a balance between arresting climate change and ensuring that India’s growth trajectory is not hampered due to the same, and it is time all world leaders strike this balance.