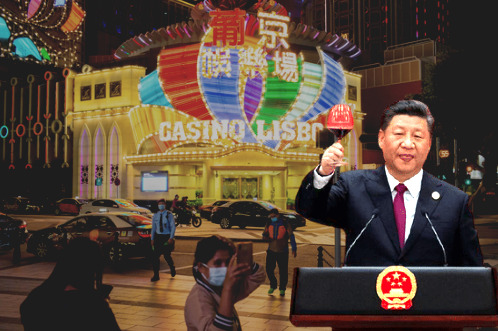 Xi Jinping has lost all sanity as he is hell-bent on destroying the Chinese economy by attacking profitable industries one after another. After the shameless implementation of the National Security law and brutal crackdown of Hong Kongers, Xi Jinping’s paranoia has led him to Macau. On Wednesday, shares of Macau casino operators lost over a third of their value, or $18 billion, as the government began a regulatory revamp that may see its authorities overseeing enterprises in the world’s largest gambling market.

On September 1, Xi spoke at the opening ceremony of the “Young and Middle-aged Cadres Training Course” at the Central Party School and delivered a speech. He had a demand to make – young cadres must be loyal and dare to fight. The Chinese President also exhorted the Communist cadres to “stick to principles and dare to struggle.” While these statements give a sign of the weakening grip of Xi Jinping, the latest development in Macau confirms the already existing trend of a paranoid leader going against everything and everyone that can challenge his authority.

The drop in value of Casinos came after Macau’s secretary for economy and finance, Lei Wai Nong, announced on Tuesday that a 45-day consultation period on the gaming business would begin the next day, citing oversight issues. Beijing, which is becoming increasingly concerned about Macau’s heavy reliance on gambling, has not yet stated how the rebidding process will be rated.

While this is the official reason why the Chinese Communist Party wants the world to believe but understanding the history, one cannot deny the fact that he uses such steps to take on his rivals and consolidate his position. And now by clamping down on the casino businesses in Macau he may very well try to target important people in the Party and by browbeating he may try to consolidate his position.

On Wednesday, U.S. casino businesses too slumped for the second day in a row, shedding as much as $4 billion in market capitalisation, with Las Vegas Sands Corp (LVS.N) falling to a year low, Wynn Resorts Ltd (WYNN.O) and MGM Resorts International (MGM.N) falling 8% and 5%, respectively.

Today, China is grappling with what is seen by the Communist party as a menace. For a man who spent his youth working menial jobs in the Chinese countryside after his father was incarcerated by chairman Mao Zedong, Xi Jinping hates the sight of Chinese youth enjoying themselves. He expects them to lead disciplined and boring life. They must work hard, score good grades and get to work – that’s just about it. Leisure has no space in the Chinese Communist dictionary. Therefore, after robbing the Chinese tech sector and crushing the country’s EdTech sector, the CCP – led by Xi Jinping has now turned its devilish eyes towards online video gaming.

His paranoia knows no bounds and, now the authoritarian actions are becoming more and more entrenched deep in his every policy decision. Xi Jinping has been reducing Chinese billionaires to millionaires by cracking down on the EdTech sector. Larry Chen, the former school teacher who became one of the world’s richest people, has lost his billionaire status as China cracked down on its private education sector. The tycoon’s net worth tumbled from $16 billion to just about $230 million in a matter of six months – wealth evaporation of 99 per cent. This came after Xi Jinping dealt a massive $800 billion blow to China’s tech giants in the last few months with his anti-market practices.

Cracks in the CCP

Xi is giving signals of a major power struggle, though he is using only the expression “struggle” to describe a spate of purges likely to hit the CCP. Xi has admitted that China is currently undergoing unseen changes in a century and that the CCP is facing more and more risks and challenges.

The atmosphere in China is that of crackdowns. The practice is trending in the Communist nation. And taking these measures like the one in Macau after destroying Hong Kong means that he is insecure and wants to show his countrymen how sincere he is in countering corruption and representing the proletariat.