Iraq may be next country to sign the Abraham Accords 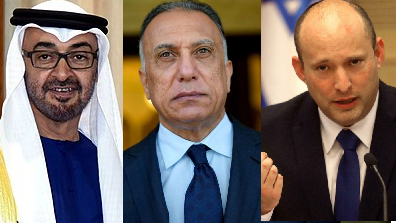 The dawn of peace in the war-torn Middle Eastern region is finally looking imminent. As Iran and Saudi Arabia inch closer towards burying the hatchet and normalise their ties, an unprecedented plea for reconciliation between Iraq and Israel has emerged. Israel has officially been Iraq’s sworn enemy since the Jewish state was founded in 1948. However, the calls for ending the war and normalising ties with Israel have strengthened in recent times.

In an unprecedented development on Friday, over 300 prominent Iraqis called on their government to join the Abraham Accords and forge closer ties with Israel. “We demand full diplomatic relations with the State of Israel…and a new policy of normalization based on people-to-people relations with the citizens of that country,” said Wissam al-Hardan, who commanded Sunni tribal militias that aligned with the United States to fight Al-Qaeda in 2005.

The plea was announced in a gathering held in Iraqi Kurdistan’s capital of Erbil. The gathering included Sunni and Shi’ite tribal leaders, social activists and former military commanders along with some former UAE and Israeli officials. The development shows growing acceptance of the Jewish state in Iraq. Iraq has strict laws for punishing citizens having close links with Israeli citizens; before 2010, promoting ‘Zionist values’ and ‘Zionist organisations’ was punishable by death. However, a later amendment diluted the provisions and limited the sentence to life imprisonment.

The hostility between Jews and Iraqis in past

Iraq has been a hostile state towards the Jewish community from the very beginning. When the Jews proclaimed their own state in 1948, Iraq began prosecuting the Jews in large numbers, forcing them to emigrate to Israel. Stating the expulsion of Iraq’s Jews as “the most infamous act” in the country’s decline, Hardan wrote in an article that Iraq “must reconnect with the whole of our diaspora, including these Jews.” An Iraqi cultural official also announced that several committees will be formed to improve ties between the state of Iraq and its Jewish diaspora.

Read More: In a twist, Iran may be stepping into an era of peace with Saudi Arabia and Israel

Iraq’s flirting with the Arab world

Iraq, a close Iranian ally, has been signaling a major shift in its foreign policy by improving its ties with the Arab world of late. Iraq is also facilitating the peace talks between Saudi Arabia and Iran, and has presided over three bilateral discussions so far. From being a client state of Iran to being a mediator between Iran and the Arabs, Iraq has come a long way vis-à-vis its diplomatic standing in the region, as the country signals a renewed and comparatively soft approach towards the Arab nations. Recently, Iraqi foreign minister Fuad Hussein also embarked upon a ground-breaking visit to Riyadh to strengthen the bilateral ties and to pledge the country’s support towards stability in the region. They also exchanged views on many regional and international issues.

It is more than clear that Abraham Accords between the Arab world and Israel along with ongoing peace talks between Iran and Saudi Arabia have emboldened pro-Israeli elements in Iraq. While Joe Biden’s ill-thought decision of ending the combat mission in Iraq in July this year had helped Iranian interests immensely, both Israel and the Arab world have so far prevented Iran from using it as leverage against them.

Read More: The Saudi-Iran friendship is a nightmare for the American military-industrial complex. Biden is ensuring that it does not happen

Waning Iranian influence in Iraq and the prospects of Abraham Accords

The waning Iranian influence in Iraq has added to the prospects of Iraq signing the Abraham Accords. The two countries are engaged in a fierce dispute over the lack of water-sharing arrangements. Iraq has accused Iran of diversifying the flow of the Tigris river’s tributaries leading to an alarming decrease in water levels in Iraq. Mehdi Rashid Al-Hamdani, Iraq’s Minister of Water Resources said on Tuesday that “We have indications that Iran is digging tunnels and changing water flow of Waterflow… and we officially informed Iran of its violations but did not receive a response.”

It is in Iran’s interests to forge closer relations with the Arab world and Israel. The Abraham Accords have already isolated Iran in the region. Iran, which sits upon abundant natural resources, can effortlessly materialize its potential if the ties with the Arabs and Jews are improved. The cooling down of tensions, if not normalisation, between Iran and Saudi Arabia, will push Iraq towards seeking closer ties with Israel. This remarkable achievement will usher in a new era of peace and prosperity in the Middle Eastern region.