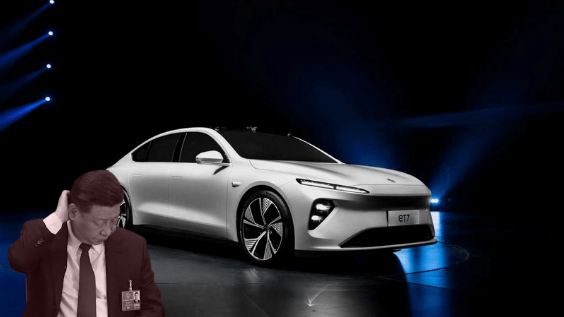 China’s industrial growth and tech ambitions are a major scam. China keeps building a lot of hype around its major projects and tech ambitions. However, more often than not these projects turn out to be a major flop. The case of China’s Electric Vehicle industry is not very different.

Evergrande- a case in point

The world has started reading about Evergrande, a Chinese real estate major, only recently. Evergrande is in a deep debt crisis and its downfall is likely to trigger a contagion effect in the Chinese economy.

However, Evergande had made it to the news last year over an unsuccessful Electric Vehicle venture. In April, Bloomberg reported that China Evergrande New Energy Vehicle Group Ltd., an Electric Vehicle startup set up by the real estate major worth $87 billion greater than Ford Motor Co. and General Motors Co. failed to sell even one automobile.

Bill Russo, the founder and chief executive officer of advisory firm Automobility Ltd. in Shanghai had said, “It’s a weird company.” Russo added, “They’ve poured a lot of money in that hasn’t really returned anything, plus they’re entering an industry in which they have very limited understanding. And I’m not sure they’ve got the technological edge of Nio or Xpeng.”

On Monday, Nikkei reported that China Evergrande Group’s electric car unit has terminated plans for a share offering amid concerns about the falling fortunes of the parent company of the Electric Vehicle unit.

Russo described Evergrande’s EV startup as “weird”. However, the EV breakdown in China is more of a general phenomenon. China’s Electric Vehicle industry is dying because of the severe power shortages in the country. SCMP reported that power cuts in the country could put a dent in the booming Electric Vehicle industry of the country. The suspension of charging stations in parts of China kept some battery-powered cars off the roads.

In a major embarrassment for China, some electric cars failed to hit the roads since last week because some charging stations suspended operations during peak hours due to power outages.

Moreover, power blackouts in over 10 Chinese provinces across the Chinese mainland are likely to discourage the people of China from shifting to EVs. Zhang Fan, a car insurance broker in Jilin province said,  “In northeast China, electric cars have been greeted with a lukewarm response for many years.”

Fan added, “The power cuts could further siphon off buying interest in electricity-powered vehicles.” Ironically, EVs were supposed to be the world’s answer to unclean energy and burning of fossil fuels but they have failed in China because the Communist nation is failing to produce enough thermal energy in lack of coal supplies.

Meanwhile, Chinese EV startups like the New York-listed Chinese upstart Nio Inc. have not been profitable since their inception. And you cannot compare the prolonged unprofitability of Chinese EV startups with Tesla. Remember, Tesla was a pioneer in the Electric Vehicle industry and had crafted a brand image for itself. On the other hand, Chinese EVs have to win people’s trust.

Also, German automobile majors like BMW AG, Volkswagen AG and Mercedes-Benz AG-owner Daimler AG have started to scale up their own operations in the Electric Vehicle industry. At the end of the day, you cannot expect Chinese enterprises like Nio, XPeng and Li Auto Inc. to match Tesla or any one of the iconic German automobile brands.

On top of China’s EV woes, the power outages in China are destroying its capability and infrastructure to maintain a huge Electric Vehicle industry. All of a sudden, China’s EV bubble seems to have burst and this is going to drive foreign investors far away from China’s electric vehicle startups.