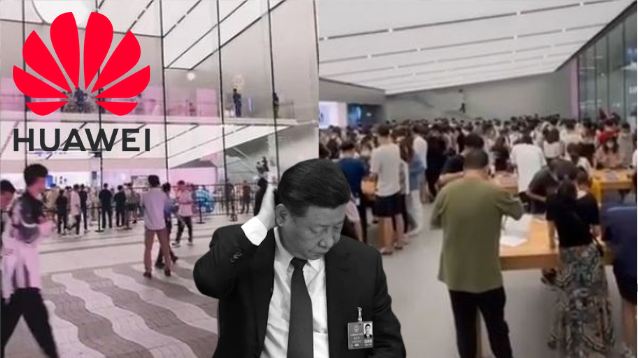 Huawei, which is making a name for itself these days in pig farming is increasingly becoming an untouchable entity within China. It must be remembered that Huawei is in bed with the CCP. The Chinese Communist Party makes use of Huawei as its designated espionage tool. The victims of this state surveillance regime are the people of China, whose private lives have been invaded and who have little to no freedoms to account for. Huawei was, in fact, well on the path of becoming a global surveillance major with its 5G expansion plans. However, the Trump administration alongside like-minded democratic allies ruined such plans of the Chinese telecommunications giant.

Recently, Apple released its new iPhone 13 handsets. As strange as it sounds, Apple is a major hit in China. It is no less than a sensation among the Chinese people, as it is one of the very few brands which has the least potential of being tapped into by the CCP. Apple products are not really used as a tool by the CCP for spying on citizens. Chinese companies fit perfectly for that job. This is not unknown to the Chinese public, which thronged Apple dealerships in China last week to get their hands on the company’s new products.

On Friday (Sept. 24), Chinese consumers were seen enthusiastically thronging Apple stores across the country. However, on Saturday, a video surfaced on China’s Weibo showing a man staging a protest outside an Apple Store in Zhejiang’s Hangzhou. The man was spotted wearing a white shirt and black pants pacing back and forth in front of Apple’s flagship Westlake store.

According to Taiwan News, in the video, the man can be seen holding a loudspeaker as he repeatedly shouts “support made in China, support Huawei!” However, as Taiwanese Twitter user Otto Huang points out, “the crowd of people buying Apple phones is indifferent. There is an endless stream of people buying Apple [products] and their enthusiasm is unabated.” So, while a CCP stooge desperately tried to dissuade the Chinese public from buying Apple’s iPhones, the ordinary citizens paid him no heed. Instead, they acted like the man did not even exist – despite him shouting his soul out on a megaphone.

Later in the clip, the person shooting the video begins to enter the store with a line of people streaming in a single-file line as they completely ignore the man’s impassioned pleas.

On China’s heavily censored social media, citizens reacted angrily to the circus which the CCP stooge put on. Some of the comments made were, “Although I’ve never used an iPhone, with this kind of behaviour, I have to say there’s a hole in his brain.” One user said, “It’s nauseating to watch this,” while another remarked, “Kidnapping morality in a socialist country.”

So, it has now become clear that the Chinese public hates Huawei. Huawei has supported the Chinese government in imposing stringent monitoring and censorship on Chinese people. Xi Jinping, on his part, has urged his countrymen to opt for domestic goods to make China self-reliant and to boost domestic consumption. However, the Chinese people have now taken it upon themselves to ensure Huawei’s demise.

With no access to vital components and smartphone sales in tatters, Huawei has been forced to look for alternate sources of revenue generation. This has led to Huawei turning to pig farming. Such are the desperate times prevalent at Huawei, that a company spokesperson even said, “The pig farming is yet another example of how we try to revitalise some traditional industries with ICT (Information and Communications Technology) technologies to create more value for the industries in the 5G era.”

Read more: Under fire from the rest of the world for laying out a red carpet for Huawei, Europe opens its 5G space for other global players

What 5G and pig farming have in common is something beyond comprehension. The sale of Huawei smartphones is at an all-time low and the company is struggling to access microchips (semiconductor chips) due to sanctions imposed on it and SMIC by the Trump administration.

Things have gone completely south for Huawei. The Chinese telecom giant’s fortunes have gone for a complete toss. Chinese people are behaving in an indifferent manner with it and are least interested to pump their patriotic sentiment only to benefit Huawei. All in all, Huawei has really landed itself in a puddle of mud.