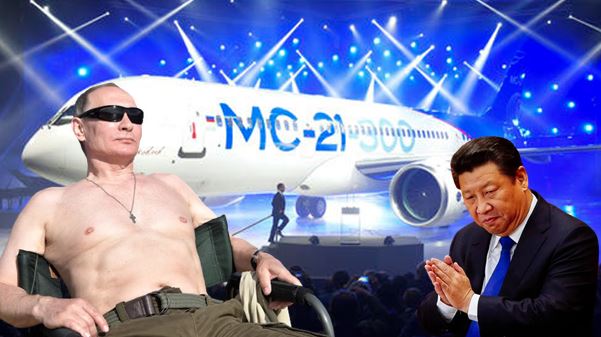 Russian President Vladimir Putin seems to have a secret ambition – countering China’s superpower ambitions. In fact, Putin has managed to outpace China in one critical sector – the aviation industry. So, while China wanted Russian help to develop its aviation industry, Putin not only denied any help to China, but also built a Russian aviation industry to rival China’s nascent aerospace manufacturing sector.

China has been looking to cut through the monopoly of US-based Boeing and Europe-based Airbus in the global aviation market since 2008. However, China’s attempts at building the C919 jetliner to take on the Boeing 737 and the Airbus A320 simply won’t succeed. On the other hand, Russia seems to have overtaken China in the aviation race by building a vast aircraft manufacturing industry of its own.

Also read: China’s indigenous aviation industry is crashing even before it takes off

In 2008, the communist nation even announced a plan to create a passenger jet to rival US-based Boeing and Europe-based Airbus.

The Chinese state-owned aerospace manufacturer, Commercial Aircraft Corp of China, also called COMAC, started manufacturing the C919 jetliner with a publicly stated target of completing the jetliner’s development by end-2020. So, you know that the project is already running behind schedule.

Aerospace projects are usually time-taking and they often miss deadlines. But things have been particularly slow with China’s C919 jetliner. By the beginning of 2020 itself, Reuters reported that the development C919 jetliner was at least 5 years behind schedule.

In fact, by January 2020, COMAC was able to complete only a fifth of the 4,200 hours in air, which is needed for approval by the Civil Aviation Administration of China (CAAC) despite two and a half years of flight testing.

The C919 jetliner is supposed to be delivered to its first client by the end of this year. However, the aircraft did not make an appearance at the Airshow China in Zhuhai recently. COMAC neither carried out a performance demonstration of the jetliner nor did it unveil an actual plane at the event. In order to make up for its abrupt absence, COMAC decided to display a life-size model of the cabin.

Reasons for slow development of C919

There are two main problems that China is facing in development of the C919 jetliner:

The C919 jetliner project has been hurt by technical and structural glitches. Let us give you an example- a Reuters report published in January 2020 stated that COMAC engineers miscalculated the forces that would be placed on the plane’s twin engines in flight. These forces are known as loads in the aviation sector. The miscalculated data was sent to the engine manufacturer, CFM International.

As per Reuters, people familiar with the incident had said that the engine and housing might have to be reinforced. There is a clear lack of skill and experience in China when it comes to manufacturing aircrafts, which is creating problems in its pet jetliner project.

Chinese supply the fuselage and the wings for manufacturing the C919 jetliner, but other critical components like the communication and flight control systems are being supplied by overseas firms and China doesn’t have the know-how to develop those systems.

China had even decided to partner with Russia by jointly developing the CR929 wide-body airliner. While C919 is a narrow-body airliner project, CR929 represented China’s jumbo jet dreams to compete with Boeing’s 787 Dreamliner. COMAC joined hands with Russia’s United Aircraft Corporation (UAC) to manufacture the jumbo jet. China News Service even claimed that China would be “a quick learner” in the joint project.

China wanted to get into the global elite club of aviation and aerospace manufacturing by partnering with Russia on a key jumbo jet project. It was simply looking to eat into Russia’s aircraft manufacturing prowess. However, things did not work out as planned between Moscow and Beijing, largely due to Russia’s reluctance to transfer core technologies to China.

Russia understands how China steals critical designs and technologies, and therefore it remains reluctant to partner deeply with Beijing when it comes to sensitive projects.

While China has failed to convince the world about its ability to rival Boeing and Airbus, Russia is on the brink of developing a magnificent aircraft manufacturing industry of its own.

As per RT, a Russian state-controlled international television network, Deputy Transport Minister Igor Chalik said, “Production of more than 700 aircraft and over 430 helicopters is planned by 2030.” Chalik specified that Baikal and Il-114 light aircraft are set to be produced along with mainline MC-21 and SSJ 100 aircraft.

Chalik made it clear that aircraft production is going to coincide with the demand levels in the airline industry. The Minister added, “We are planning to meet growing needs of airlines, including those for replacement of the fleet becoming obsolete and, accordingly, for its decommissioning.”

So, Russia is clearly looking to capitalise on the fast-growing aviation market even as China’s aviation industry fails to take off.