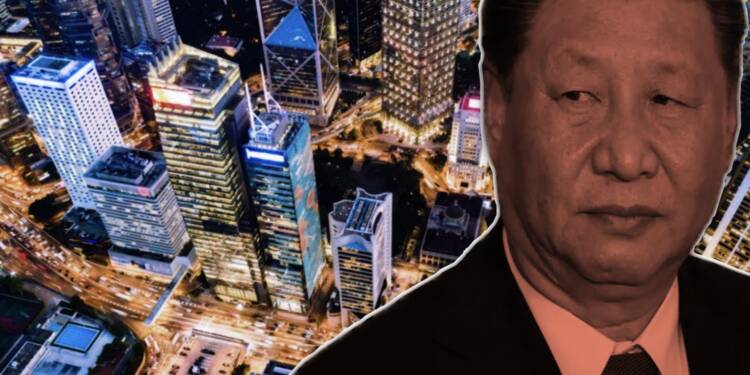 Last year, the Chinese Communist Party under Xi Jinping practically took over Hong Kong, ignoring the deal with the United Kingdom and the will of the people in an iron handed way. However, as the situation of the Chinese economy becomes more and more precarious, Hong Kong has got its opportunity to get back at China and Xi Jinping. According to data from the Hong Kong Census and Statistics Department, the number of people fleeing from Hong Kong has been steadily increasing, with the territory’s population reducing by 110,000 people from 2019 to this year. The installation of a National Security Law in China has certainly resulted in a major population exodus.

While it in itself is a concerning story for Beijing but, Hong Kong is losing not only residents but also overseas firms. Vanguard Group, the world’s second-largest asset management firm, VF Corp, and Sony Interactive Entertainment, for example, have relocated their top regional management to Singapore. The world’s largest luxury goods company, LVMH Moet Hennessy Louis Vuitton, has also relocated its personnel from its Hennessy alcoholic beverage branch in Hong Kong to Singapore. While it was not able to withstand and tackle the introduction and implementation of the National Security Law, now it can make Beijing pay hefty sums of money.

The extreme vulnerability of China

Xi has taken a spate of decisions over the past year that has led to China’s economy bleeding. The recent collapse of property giant China Evergrande Group’s downfall has exposed a fragile real estate bubble in China. Land sales are dwindling in China with Xi’s tight regulatory measures that prohibit financial support towards construction and property projects. As the Chinese real estate bubble bursts, onshore and offshore bondholders stare into huge losses running into billions of Dollars.

Meanwhile, Xi is murdering private enterprises. He is cracking down on Tech and Edutech enterprises relentlessly which has led to the State-owned enterprises surpassing the private sector in China. Meanwhile, the Chinese stock markets are crashing and hurting the interests of both domestic and overseas investors. As per the Washington-based Institute of International Finance (IIF), China’s debt stood at 300 per cent of its GDP in 2019. However, the overall debt burden is hard to estimate, given the country’s tendency to use local government financing vehicles for bypassing direct debt.

The power sector crisis, which has been triggered by Xi’s decision to avoid importing Australian coal has led to major suffering. Thermal projects in China that were fine tuned to work with Australian coal are suddenly collapsing and the entire Communist nation is getting engulfed in blackouts, even as factories and manufacturing units shut down in China’s industrial belts.

The situation in Hong Kong

On 5th October, investor expectations of increased interest rates fueled a global sell-off in technology equities, with a Hong Kong benchmark tracking Chinese technology firms closing near a record low. The Hang Seng Technology Index, which began trading in July of last year, dipped 0.3 per cent after recovering from earlier losses of up to 2.5 per cent. The index, which includes Tencent Holdings Ltd. and Alibaba Group Holding Ltd., is set to fall for the fourth week in a row.

While Hong Kong surely is not able to take on China in the show of force, these developments in Hong Kong along with the investors leaving and moving to other countries is in itself a shred of evidence. This can make China bleed when it is in the most vulnerable situation, thus, getting back at China for its actions against the people of Hong Kong.