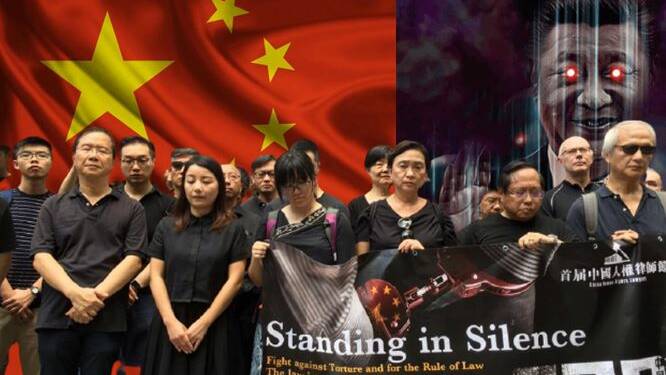 The tightening grip of Xi Jinping over the country and his increasingly centralising policies have led to catastrophic consequences. Now with only a year left for the 20th National Party Congress, coupled with the current economic state of China and its energy crisis, a paranoid Xi Jinping, fearing another lawyer-led anti-CCP (Chinese Communist Party) uprising, is ready to repeat the infamous purges ‘709 crackdown’ of 2015.

In the latest move to tighten control over the legal industry in China, the CCP has prohibited lawyers from discussing cases in public.

China’s official lawyers’ association has issued new guidelines prohibiting lawyers from “hyping up cases” online or in the media. The All-China Lawyers Association’s (ACLA) ethical principles went into effect this week with immediate effect, albeit on a preliminary basis. Since the ‘709 crackdown’ in 2015, which saw nearly 300 human rights lawyers, legal assistants, and activists taken up and sent to unimaginable locations across the country, the communist party has been expanding its authority into the legal system with tougher regulations and a succession of disbarments. These developments are reminiscent of the ‘709 crackdown’ of 2015, and to understand the gravity of the situation, one must first know what happened in 2015.

709 Crackdown and the great purge:

During the summer of 2015, the 709 Crackdown (also known as the ‘709 Case’) was a statewide crackdown against Chinese attorneys and human rights campaigners. The “709 crackdown” began on July 9, 2015, and is known as the “709 crackdown.”
According to Yaqiu Wang of the Human Rights Watch, “The 709 crackdown inflicted a catastrophic blow to China’s rights-defence movement, which drastically contracted as rights attorneys were detained, disbarred, or placed under surveillance,”

According to official figures, during President Xi’s first five years in power, 1.34 million officials at all levels of the so-called “tigers and flies” were brought down by corruption and disciplinary charges. As reported by BBC, no walk of life has been spared – those felled range from village chiefs and factory managers to government ministers and generals.

The Chinese Communist Party’s legitimacy has been anchored by solid economic growth and top-down accountability in the absence of democratic elections and the death of communist doctrine following the end of the Cold War. However, as China plunges deeper into economic uncertainty and as it faces difficulty in providing basic necessities like electricity to its citizens, the new diktats are an exclamation of upcoming purges, of course, for the goodwill of communist China. With investors leaving, manufacturing moving out of China and property bubble bust, public dissatisfaction with Xi Jinping and his regime is at an all-time high. To contain this vulnerability, Xi Jinping is preparing for a repeat of the 2015 purges.

Similar to how Chinese emperors dealt with their aristocratic rivals, the Xi Jinping administration is purging his rivals’ entire families and network of friends.

Xi Jinping’s campaign against his rivals:

Zhao Leji, the current director of Xi’s anti-corruption organisation, told the Chinese state-owned Xinhua News Agency that the inspectors in charge of scrutinising 25 financial firms will “thoroughly search for any political deviations.” This was a hint that Xi’s anti-financial-sector drive has a strong political underpinning. Jinping’s attack on the financial sector has a direct political tie to China’s Vice President Wang Qishan. The Chinese financial sector is seen as the power base of the Vice President. In fact, Qishan rose to prominence during his stint as the head of the state-owned China Construction Bank Corp., in the 1990s.

Xi Jinping is putting a brave face by cracking down on everything under the sun. But in reality, he is turning extremely paranoid. Xi started cracking down on everyone in the CCP and the Chinese business world, in a bid to consolidate his position. However, Xi’s actions like cracking down on tech giants, fintech companies and edutech companies, have led to losses of billions of dollars. In addition to this, he has also cracked down against Caixin media, the last standing channel of some journalistic credibility throughout the mainland.

Also read: Jinping’s action against Caixin is his first step towards a political suicide

Caixin media follows the methodology of research and churning numbers. Unlike Chinese state-owned media that works under the larger umbrella of the Jinping administration, Caixin does not invoke jingoism or ultra-nationalism in senseless op-eds. However, Caixin media founder and publisher Hu Shuli is close to Chinese Vice President Wang Qishan, and therefore, she had to go. By cracking down on even this, Xi Jinping has left no space for the public to opine its concerns.

The latest guidelines and societal threshold:

Lawyers are also prohibited from organising petitions and news conferences, publishing open letters, or engaging in public advocacy activity with the goal of influencing court judgments through public opinion. They are also not allowed to disseminate documents, videos, or images without court authority, according to the guidelines.

They will also need to apply in post-trial proceedings, such as appeals and retrials. The new regulations prohibit deviating from party doctrine or inciting public opposition against the party and administration in comments on national policy, public events, and all legal problems. According to SCMP, Xie Yanyi, a former human rights lawyer whose licence was revoked in 2018 as a result of the 709 crackdown, called the new rules “unconstitutional and unreasonable,” and said they would “severely limit lawyers’ capacity to maximise their clients’ interests through public advocacy.”

A paranoid Xi Jinping is trying to solve everything by taking direct control and purging anyone who may be a threat. However, in his pursuit, he has reached a societal threshold where people are fed up beyond reasoning. In such a situation, fearing another lawyer led anti-CCP uprising, a 2015 style purge will damage more than it will repair.