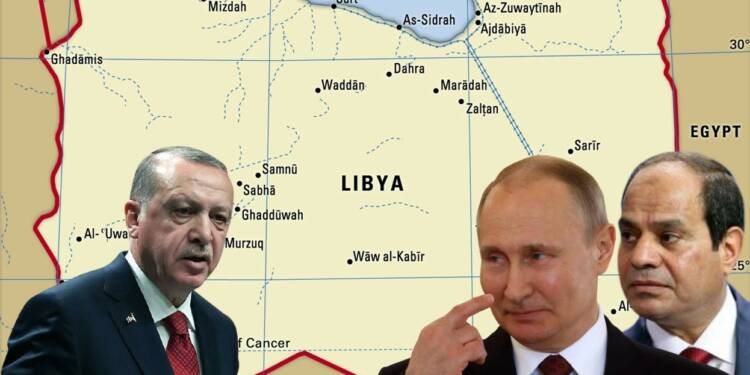 Turkey supports an Islamist regime in Libya. This is the Government of National Accord (GNA), which is holding the fort in the capital city of Tripoli and making significant gains against the rival Libyan National Army (LNA) led by General Khalifa Haftar. The GNA controls western Libya and the capital city of Tripoli, while the Haftar-led LNA has its stronghold in eastern Libya – bordering Egypt. Now, one can witness what is being considered the beginning of a phased and gradual withdrawal of foreign forces from Libya – which might finally bring an end to the war in the African nation. Russia and Egypt are at the centre of this settlement effort, and Turkey is the only loser.

Egypt, UAE and European powers support the Haftar-led LNA, and ideally, would want the General to take control over Libya – since he is not a Turkish stooge, unlike the GNA. While Turkey and Qatar are rooting for GNA, Haftar’s LNA has the backing of the United Arab Emirates, Saudi Arabia, Russia, and Egypt. Despite a UN arms embargo on Libya, Turkey has been sending reinforcements and even Syrian mercenaries in order to enable the GNA to push back the forces of General Khalifa Haftar. But now, Russia and Egypt have teamed up to kick Ankara out of the park.

Turkey has withdrawn a limited number of Syrian mercenaries from Libya over the past few weeks. Libyan Foreign Minister Najla al-Mangoush confirmed the withdrawal in early October, describing the development as “a very modest start,” before “a larger and comprehensive organization for the exit of mercenaries.” According to a report by the AL-Monitor, Turkey pulled Syrian mercenaries stationed in Misrata and Tripoli out of the country on three separate flights over the past two months.

Of some 5,000 militia troops in the country, around 800 had left as of September 30. The Syrian Observatory of Human Rights (SOHR) puts the number of Syrian fighters withdrawn from Libya as of October 13 at some 520.

The withdrawal of Syrian mercenaries on Turkish payroll from war-torn Libya comes amid an effort by Ankara to mend its ties with Cairo. Egypt and Turkey’s ties are strained and one of the fundamental differences between them is that they find each other on opposite sides in Libya. Interestingly, a major bone of contention between Turkey and Russia too is the Libyan war. However, Egypt and Russia find themselves on the same page when it comes to Libya and have their interests coinciding with each other. Therefore, the recent Turkish withdrawal of Syrian mercenaries out of Libya is to be seen as a diplomatic win by Moscow over Ankara.

Earlier this month, Egyptian Foreign Minister Sameh Shoukry discussed with the Russian Security Council Secretary, Nikolai Patrushev in Moscow bilateral relations and international and regional developments. During this meeting, Shoukry stressed the need for all foreign forces to leave Libya.

The Russian foreign minister reiterated Moscow’s position after a meeting with his Egyptian counterpart in Moscow. “Our position is clear: this should be done in stages and in a synchronized manner to avoid any risk of undermining the existing balance of power.” He was, of course, referring to the withdrawal of foreign forces from Libya.

Read more: It is UAE, Egypt, Saudi Arabia vs Turkey now – How the Libya War has divided the Muslim World into ‘Good Muslims’ and ‘Bad Muslims

Russia seems to have made it clear that for any meaningful withdrawal of troops to happen from Libya, Turkey must first take out its mercenaries from the war-torn African nation. Ankara – which is keen to develop ties with Egypt and revive its relations with the Arab world seems to be gladly obliging.

Libya is slated to hold parliamentary and presidential elections in December, for the first time in several years following the public lynching of Mu’ammar Gaddafi. With these crucial elections approaching, Egypt is pushing for normalcy to return to Libya, and Russia is leveraging the same against Ankara to ensure that it takes out its mercenaries from the country. Meanwhile, there are no indications of Russia withdrawing its militias from Libya. So, in toto, Turkey is the one being forced into a compromise by Moscow and Cairo.