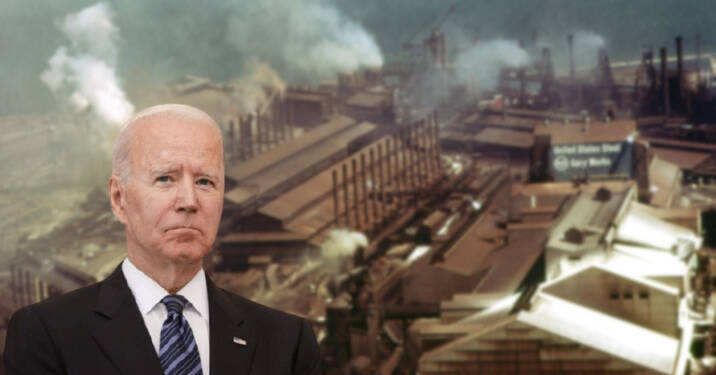 Even though US President Joe Biden has been in office for more than nine months, he is unable to reverse the impacts of Trump’s actions. Consider Trump’s 25% tariffs on steel imports last year. This was part of his drive to restore the American steel industry, dubbed “Make America Great Again.” Steel import taxes imposed by Trump have remained in effect till now. President Biden, on the other hand, has quickly become mired in a political predicament. Biden has faced mounting pressure to repeal the tariffs, but he also understood that removing steel tariffs might stoke union resentment, damaging Democrats in the Midterm elections scheduled next year.

However, now Joe Biden has ended the tariffs on steel and aluminium, to keep the EU towards its side at the expense of America’s working-class citizens and domestic steel and aluminium producers. As the Russian energy influence in the European Union is on the rise, Joe Biden scrambled to save some shred of US bonhomie with the EU. There could have been other ways to decrease the gap created after the sudden AUKUS deal keeping France out of the loop. Biden has a history of making bad decisions.

By removing the tariff on European Steel and Aluminium products, Biden has opened the flood gates. With this, the competition will rise, and given the pandemic situation, it will be the worst nightmare for American domestic producers and workers.

What does the deal encapsulate?

Under the agreement negotiated on the sidelines of the G20 meeting in Rome, EU-made metal products will be permitted into the US tariff-free at levels seen before the trade war. The EU’s punitive measures will be suspended. Both the parties will put their legal battles at the World Trade Organization on hold, to reach a lasting settlement within two years. It will minimise overproduction and make the industry more environmentally friendly. Valdis Dombrovskis, the EU’s trade commissioner, said 2021 will be a “landmark year for transatlantic ties” since the EU had “successfully pressed the reset button with the Biden administration.”

Pleased to announce that @POTUS Biden and I reached an agreement to suspend the tariffs on steel & aluminium, and to work together on a new Global Sustainable Steel Arrangement.

Together, we deliver for our citizens and for the climate. https://t.co/MnsYzITEoA

While all these words tell you how elated the EU is. It must be as this will open the American consumer markets for their steel and aluminium products without caring about the tariff that kept American industries on a competitive edge.

The officials want everyone to believe that it is for some sort of larger goal like climate change and taking on China. White House national security advisor Jake Sullivan told reporters that ultimately, the agreement to establish a carbon-based framework on steel and aluminium trade addresses both Chinese overproduction and the steel and aluminium sector’s carbon intensity.

However, the real factor that has accelerated the reaching of this deal between the EU and the US is the increasing dependence of the EU on Russia and the veining influence of the US in the region.

The energy crisis, as well as the uncertainty surrounding the supply of oil and gas to Europe, has thrown the continent into disarray. Vladimir Putin has stepped in to save them at a time when they are most vulnerable, a move that no one could have predicted. President Vladimir Putin stated that Russia is prepared to meet all of Europe’s natural gas requests, blaming the continent’s current energy crisis on weak policies rather than a supply deficit. Putin said on October 13th at Russia Energy Week in Moscow that Europe’s largest gas supplier is expanding deliveries in response to customer demand and is “ready to explore any more steps” to stabilise the region’s markets.

Gas and electricity prices have risen dramatically, wreaking havoc on Europe’s economy. Last week, Putin’s first verbal involvement in the market slowed the rally, but prices have since recovered marginally. On Wednesday, the European benchmark, Dutch front-month gas, rose as high as 8.9% to 93.35 euros per megawatt-hour. And as reported by TFI earlier, Russia also wants the Nord Stream 2 pipeline to be certified quickly, to improve gas deliveries.

The US responds by sacrificing its people.

These developments had the Biden administration in a fix, as they are no longer in a position to lose another diplomatic and geostrategic bastion. Finding no solution to bring back trust in the EU countries for the US, he has decided to remove Trump-era tariffs on the import of steel and aluminium products from the EU, which had saved the domestic steel and aluminium industry in these tough times.

Scott Paul, President of the Alliance for American Manufacturing, has been quoted by POLITICO as saying, “The Biden administration understands that simply lifting steel tariffs without any solution in place, particularly beyond the dialogue, could well mean layoffs and plant closures in Pennsylvania and in Ohio and other states where obviously the impact would be felt not only economically but politically.”

In addition to him, Kameen Thompson, the President of the local United Steelworkers union, told POLITICO that after years of tepid demand, a century-old steel processing plant in the Conshohocken suburb of Philadelphia is finally picking up due to Trump’s tariffs on foreign-made steel.

Now as the Biden administration removes these safety nets placed by Donald Trump, all these industries will perish and bringing back manufacturing to the USA will become even more difficult. Joe Biden has sacrificed the lives and livelihood of its domestic working class to somehow save the US from the mess that he created.