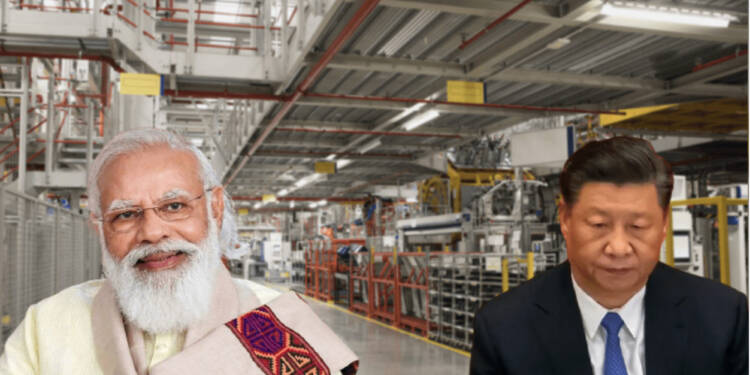 Purchasing Manager’s Index Data – The Chinese economy, as TFI has explained on umpteen occasions, has begun unwinding. While the Xi Jinping regime in China leads a crusade to run the Chinese economy into the ground, India is achieving one historic feat after the other. Chinese industrial growth and as a consequence, its economy is contracting. Now, there are numbers to prove such assertions. Economic and industrial data from October, for both India and China, show how the Communist nation is seeing firsthand its once-bustling economy going down the drain, while the fortunes of India – its arch-nemesis are growing from strength to strength.

China’s factory activity contracted more than expected in October to shrink for a second month. According to China’s National Bureau of Statistics (NBS), the official manufacturing Purchasing Manager’s Index (PMI) was at 49.2 in October, down from 49.6 in September. Of course, this is ‘official’ data given out by the Chinese regime. The reality might be even worse for all we know.

The Purchasing Managers’ Index (PMI) is an index of the prevailing direction of economic trends in the manufacturing and service sectors.

Meanwhile, a subindex for production slipped to 48.4 in October from 49.5 in September. A subindex for new orders also contracted for a third month, coming in at 48.8. Furthermore, in what has sent divers down the CCP regime’s thin spine, a subindex for output prices rose to 61.1, the highest since 2016 when the statistics bureau started publishing the indicator, which according to Reuters, suggests rising inflationary pressures while broader economic growth slows.

▪️ PMI of 50 is border between economic growth and economic contraction pic.twitter.com/lURvH1gfan

Zhiwei Zhang, chief economist at Pinpoint Asset Management told Reuters, “The output price index rose to the highest level since it was published in 2016. These signals confirm that China’s economy is likely already going through stagflation.” Analysts have also said that domestic consumption within China is slumping, suggesting a complete failure of Xi Jinping’s flagship “dual circulation” campaign which was aimed at making China self-reliant and independent of global markets.

According to IHS Markit, India’s Purchasing Managers’ Index (PMI) rose to 55.9 in October expanding for the fourth consecutive month. A reading above 50 indicates expansion in economic activity and a number below that signals contraction. Essentially, at a time when China’s economic activity is contracting, India’s is expanding at a very motivating pace. The October Purchasing Manager’s Index for India stood at an eight-month high and is expected to surpass the previous record high of 57.5 very soon.

The data analytics firm which published the Purchasing Manager’s Index data said, amid reports of improved market confidence, rising requirements among clients, and successful marketing, new orders continued to expand in October. It added, “While strong growth of both sales and production were noted in each of the three broad areas of the manufacturing sector, it was in intermediate goods that the sharpest rates of expansion were recorded.”.

Very interestingly, Indian companies observed a notable pick-up in international demand for their goods. According to HIS Markit, “New export work rose at a solid pace that was the quickest in three months.” Mind you, international demand for Indian goods is growing at a time when foreign companies are increasingly rethinking their association with China. Companies like Apple and Tesla have begun rethinking their operations in China and are looking to turn to India very soon.

Read more: Apple and Tesla turn to India as China struggles under an intense energy crisis

As a matter of fact, global buyers are turning to Indian suppliers instead of China to fulfil their needs. That being said, this Christmas promises to be dull for the West – as they are still heavily dependent on China for a variety of goods that India does not export yet.

China is reeling under an intense energy crisis. China’s power crisis is bigger than you would think. At least 20 provinces in China have been hit by some kind of power cuts and outages. These provinces make up over two-thirds of China’s Gross Domestic Product (GDP). The manufacturing powerhouses of China – Jiangsu, Zhejiang, and Guangdong provinces are among the worst hit. Together they account for one-third of the Chinese economy and lead China’s colossal exports industry.

Ceramics, stainless steel, fertilizers, and food processing units, you simply cannot think of a Chinese industry that remained immune from the ongoing power crisis. Power rationing in China has brought manufacturing and industrial activity to a standstill in the Communist nation, and the effects of the same have been reflected in China’s October Purchasing Manager’s Index.

China’s power crisis is not softening. Factories have been shut until the end of the year. So, even the CCP is not expecting some quick respite. Therefore, China’s economy will only go further downhill from here on. Meanwhile, China has also come to face a severe food crisis which bears an eerie resemblance to the kind-faced in Venezuela. According to the latest data from the Chinese Ministry of Commerce, wholesale vegetable prices increased by 28% in the four weeks ending October 22 and are already at their highest level since February. This year’s crops were harmed by heavy rains in major growing regions, and rising coal prices have made greenhouse farming more expensive.

Hence, amid weakening supply and rising prices, the people of China find themselves in a dearth of vegetables and money too. This will only exacerbate China’s economic woes as it completes its journey towards a failed state. Xi Jinping will go down in history as the man who wrapped up China and reduced it to a rogue jingoist nation.

Full form of ANAMA and Duties