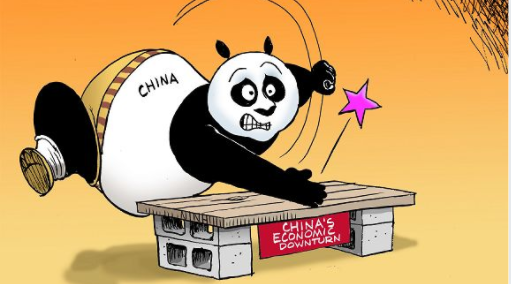 Chinese President Xi Jinping is desperate. China’s economy is taking a huge dive by being decoupled from the US and other Western powers and Xi desperately wants to revive Chinese economic growth. So, last year, Xi came out with a fresh strategy called “dual-circulation” with the hope of reorienting China’s exports-based growth model and banking on domestic consumption. The idea was to cut dependence on both overseas technology and markets while letting domestic alternatives tap into China’s humongous market.

But guess what? Xi’s “dual-circulation” is dead on arrival. Chinese tech entrepreneurs are simply not competent enough to substitute the overseas technology on which the paper Dragon continues to depend. And while China is closing its doors on foreign technology, the local alternatives can hardly manage self-sufficiency.

Till now, Chinese growth has been fuelled by the transfer of key technologies but now with Xi’s “dual-circulation” strategy, the technologically advanced countries are getting worried. They understand that Beijing wants its technology but doesn’t want to share its markets in return. So, the Western tech companies are likely to avoid investing in Chinese technology but Chinese tech entrepreneurs aren’t really a viable alternative to the foreign technology that China used to import.

As per Nikkei Asia, the American Chamber of Commerce in China released a report last month which reflected the concern of international businesses about China’s dual-circulation policy. AmCham members also expressed worry that Beijing will look to acquire foreign technology without allowing foreign investors to compete with Chinese enterprises on a level playing field.

The report stated, “The Wassenaar Arrangement that strictly controls the export of weapons and sensitive dual-use goods and technology to nonmember countries, particularly to China, would also constrain foreign investors’ ability to bring in the most advanced technology to China.”

Be that as it may, Western tech leaders might be getting reluctant to invest in China and this should send warning bells ringing for Xi Jinping. Truth be told, the “dual-circulation” policy cannot survive in the lack of viable foreign technology imports.

Lack of foreign technology will hamper the ability of Chinese enterprises to tap into the domestic market properly and defeat the very premise of Xi’s rhetoric surrounding dual circulation and self-sufficiency. The FitchRatings report argued, “Domestic investment alone may not be enough to help China narrow the technological gap, as production of high-tech products usually involves collective efforts by companies of various origins along the supply chain.”

Read More: Xi Jinping is brewing the most lethal concoction for China’s economy, and the repercussions will mean absolute downfall

Ding, the Chairman of China’s largest hand pallet truck maker Noblelift, too seemed to agree about how domestic investment in China alone cannot bridge the technological gap. He said, “Nobody can survive alone under decoupling.” Ding added, “Our markets are in Europe and the U.S.”

If Xi was thinking that he will quietly import foreign technology but kick out foreign investors when it comes to tapping the domestic market, then his “dual-circulation” strategy has gone awfully wrong. The international business community has pre-empted Xi’s plans and now it is going to keep the Communist nation devoid of critical technologies, which effectively means that “dual-circulation” is dead on arrival.