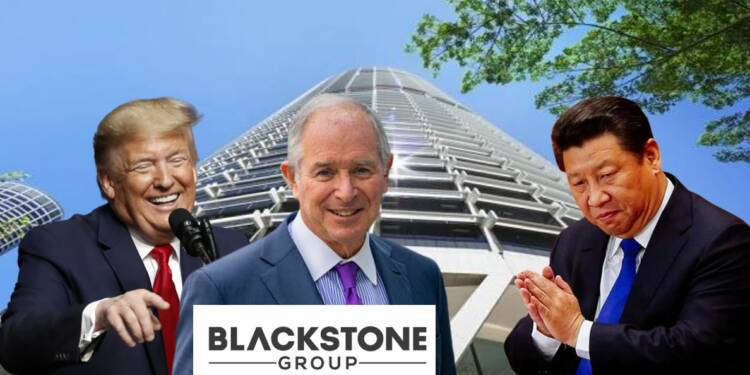 China has been thrown out of yet another project in Australia. This time, a Chinese company has been replaced by Australia with a pro-Trump American multinational giant. We have all heard of Blackstone, right? The multinational investment company run by Trump supporters and Republicans is especially famous among the conservatives of the United States. Stephen Allen Schwarzman, who is the chairman and CEO of The Blackstone Group briefly served as Chairman of former President Donald Trump’s Strategic and Policy Forum. Schwarzman is a Republican. He is a long-time friend of Donald Trump and provides outside counsel. Previously, he even raised $100,000 for George W. Bush’s political endeavours.

China Investment Corporation, commonly referred to as CIC, had struck an agreement last November to acquire half a stake in the 44-storey Grosvenor Place office tower in Sydney, for A$925 million. In July this year, the media had reported that CIC had received approval for the transaction from Australia’s Foreign Investment Review Board, despite rising tensions between the two countries over trade and foreign affairs.

Now, The Australian has reported that Blackstone had been lined up as a replacement buyer for 50% stake in Grosvenor Place, and potentially for an additional 25% stake already held by CIC and managed by local property group Mirvac. According to Mingtiandi, the doomed investment would have marked a reappearance on the global real estate stage for CIC, which had reported $940 billion in assets under management in 2018, but went largely quiet after a series of overseas acquisitions through that year.

Former President Donald Trump made it a hobby to make life miserable for China. Even when he is out of office, the man seems to be controlling China’s fortunes in more ways than one. In Australia, an investment company sympathetic to Donald Trump has pulled a fast one over China, leaving it floundering to search for projects in other parts of Sydney to save face from the humiliation caused to it.

In fact, Blackstone CEO Stephen Schwarzman has quite a colourful history of working on behalf of the Republicans. In August 2010, Schwarzman compared the Obama administration’s plan to raise the tax rate on carried interest to a war and Hitler’s invasion of Poland in 1939, stating, “It’s a war. It’s like when Hitler invaded Poland in 1939.”

Also read: Australia is coming up with its ‘China Plus’ strategy and it is going to be disastrous for Chinese economy

In late 2016, Schwarzman “helped put together” a team of corporate executives to advise Trump on jobs and the economy. In December 2018, non-profit consumer advocacy organisation – Public Citizen, published a report titled: ‘Self-Funded’ Trump Now Propped Up by Super PAC Megadonors’. The report disclosed that Schwarzman donated $344,000 in support of Trump’s re-election campaign.

So, if it turns out that Blackstone jeopardised a Chinese company’s fortunes in Australia at the insistence of Donald Trump, we would definitely not be shocked.

In July, TFI had reported how China was about to suffer yet another setback down under, as calls grew in Australia for the Port of Newcastle to be demonopolized of Chinese influence.  The Port of Newcastle handles approximately 40% of Australia’s export volume of coal every year, which includes 4,400 ship movements and 164 million tonnes of cargo. It has been privately owned since 2014 by The Infrastructure Fund and China Merchants Port Holdings Company (CMPorts).

Demands are now being made to declare the port under the National Access Regime (NAR), which will enable the Australian Consumer Competition Commission (ACCC) to have oversight over the port’s workings. Earlier, China was kicked out of the Darwin Port and Victoria’s Belt and Road Initiative by Australia. Now, getting overtaken by Blackstone is hardly surprising for the communist nation, although it is as embarrassing as China’s first humiliation was, in the down under country.

UAE, Russia and Israel form a new power bloc in the Middle East. US left out