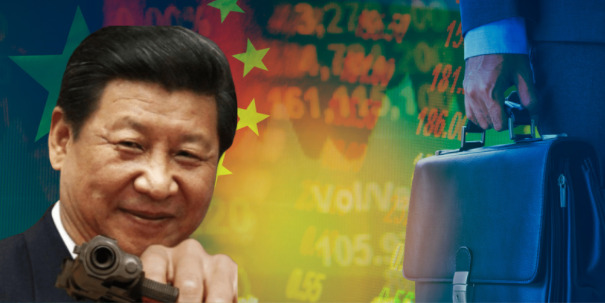 The Communist nation of China is a hostage holder. It kidnaps foreigners, demands ransom from their host countries in kind and brutalises the victims while at it. There are umpteen instances of China resorting to kidnapping foreign nationals. The case of Canadian nationals, Michael Spavor and Michael Kovrig being held captive by China is the best example one can provide. In exchange, the CCP has been strongarming Canada and the United States to return Huawei CFO Meng Wanzhou to China. Now, the Xi Jinping regime of China is upping its game. It is now openly threatening Americans in the United States with dire consequences for their businesses if they do not agree to serve the CCP’s purposes.

In an explosive development, China has been threatening U.S. executives, companies and business groups in recent weeks to fight against China-related bills in the U.S. Congress. According to Reuters, letters from China’s embassy in Washington have pressed executives to urge members of Congress to alter or drop specific bills that seek to enhance U.S. competitiveness. According to the text of the letter, Chinese officials warned companies they would risk losing market share or revenue in China if the legislation becomes law.

Two bills are at the centre of China’s worries. The U.S. Innovation and Competition Act (USICA), passed the Senate with bipartisan support in June and a related bill in the House of Representatives called the Eagle Act, which is more strictly policy-focused, has sent China into a tizzy. The legislations seek to boost U.S. competition with China and fund semiconductor production – both of which worsen China’s pre-existing woes to a large extent. China has openly asked top U.S. executives and business groups to initiate lobbying efforts to ensure such legislation do not see the light of day.

The letter by the Chinese embassy said, “We sincerely hope you … will play a positive role in urging members of Congress to abandon the zero-sum mindset and ideological prejudice, stop touting negative China-related bills, delete negative provisions, so as to create favorable conditions for bilateral economic and trade cooperation before it is too late.” It added, “Promoting a China-free supply chain will inevitably result in a decline in China’s demand for U.S. products and American companies’ loss of market share and revenue in China.”

The U.S. Congress is the seat of American democracy. It represents everything American. Now, China is wanting to co-opt this institution to further its objectives. A U.S. House of Representatives committee earlier this year advanced legislation intended to boost competitiveness with China. The legislation authorises roughly $250 billion in funding for technology research, semiconductor development and manufacturing, as well as subsidies for robot makers and chipmakers amid a shortage of microchips around the world.

Chinese organisations engaged in US cyber-attacks or theft of US intellectual property from US firms would face sanctions too, once the bill is passed. The bill has several other provisions which squarely hurt Chinese interests.

At a time when it is reeling under the stress of an intense power crisis and economic downturn, countries from around the world have decided to kick the Communist nation in the shins. Beginning December 1, some 32 nations would no longer grant favourable tariff treatment to Beijing. As reported by TFI, China will no longer be eligible for GSP trade benefits from 27 EU nations, the United Kingdom, Canada, Turkey, Ukraine, and Liechtenstein as of December 1.

China’s low-margin, labour-intensive industries would be the hardest hit, potentially hastening the movement of manufacturing from China to other developing countries. It must be remembered that China’s cheap labour industry and consequently, cheap commodity prices are the reason why the country became the largest exporter in the world. Supply chains became centred around China. However, with 32 countries ending the preferential tariff treatment for China and making it pay like any other normal country – the Communist nation’s manufacturing and export sectors are bound to take a hit.

Everything seems to be working against China. The democratic world has been increasingly standing up to China’s unfair trade practices which are not in line with World Trade Organisation rules. In WTO’s regular Trade Policy Review in October, the US, the EU, the UK among others, complained about China’s reluctance to conform to the international trade rules aimed at establishing a level playing field for all participants in the global exchange of goods and services.

Now, if the U.S. plans to push through domestic legislation which ends up hurting China’s fortunes in a big way, the same can be counted as the latest setback for the Communist nation. China has given an ultimatum to U.S. executives and companies – force Congress to do away with legislation aimed against us, or be ready to have your operations and interests frozen in China. Xi Jinping is effectively trying to hijack the top democratic institution of the United States and stall its functioning.