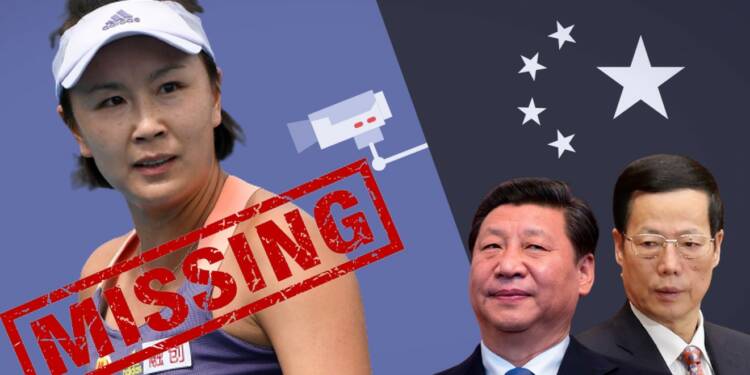 ‘Tennis’ is the hottest keyword trending in China these days, and the person behind this trend is a Chinese professional tennis player named Peng Shuai. It’s not like she has won another Grand Slam doubles championship or reached some significant milestone that has put her in the spotlight, rather it’s her war against the Chinese elites and the CCP, which has stirred a massive women-led uprising in the communist nation.

Earlier this month, 35-year-old Peng Shuai accused former Chinese Vice Premier Zhang Gaoli (2013-2018) of sexually assaulting her, through a message posted on China’s twitter-like microblogging website Weibo. The post, that took the Chinese social media by storm, got immediately removed by the CCP censures, and the tennis star has not been seen or heard from publicly since.

The Women’s Tennis Association (WTA) and leading voices from the world of tennis are increasingly speaking out about Peng since. Former women’s world number one and 23-time Grand Slam winner Serena Williams recently told that news of Ms. Peng’s disappearance had left her “devastated and shocked”.

With pressure piling up and concerns mounting regarding her safety, China’s state-owned television broadcaster, CGTN, released an email Wednesday morning, claiming it was penned by Shuai. The email stated she is neither missing nor in danger: “I’ve just been resting at home, and I’m OK.”

The Women’s Tennis Association’s chairman and CEO, Steve Simon, questioned the email’s validity by stating that “The WTA and the rest of the world need independent and verifiable proof that she is safe.” But Peng Shuai’s struggle against the Chinese Communist Party is just the tip of the iceberg. Her allegations putting the CCP’s top leadership in a dock has revived the feminist movement in China, which are up in arms against the CCP’s misogynist policies.

Chinese authorities have spared no efforts in cracking down on the burgeoning uprising, but that has only exacerbated the movement against the CCP. With high-profile examples of sexual assault bringing more women together to discuss gender-based violence in China, the feminist movement is rising in the country at a blistering pace.

Being a woman in China is nothing short of misfortune under Xi Jinping’s tyrannical rule. Abusive relationships, toxic corporate culture, and indifferent administration have taken a massive toll on the well-being of Chinese women. They are deceived, cheated, discriminated and loathed for being a woman, while the government dastardly asks them for shouldering the responsibility of their families.

A women-led uprising around the corner in China:

Make no mistake, that’s not the only high-profile MeToo case that has taken Chinese society by storm. In 2018, a Chinese woman named Zhou Xiaoxuan moved to court accusing Zhu Jun, a renowned state broadcast show host, of sexually harassing her while she worked as an intern at his show back in 2014. Chinese web users have closely followed Zhou’s suit against the accused, and even organised campaigns to lend their support.

And now, Peng Shuai’s case has reinvigorated the MeToo movement in China. China successfully suppressed the first wave of MeToo allegations in 2018 owing to its massive censorship campaign against the budding movement on social media. MeToo became the hot topic after a slew of allegations were levelled in Universities, entertainment, media and non-profit organisations. However, with Shuai’s case bulking larger, it would be impossible for the CCP to suppress the MeToo movement in the country.

The people are livid at the government’s indifference and CCP’s attempts to muzzle users advocating equal rights for women. Jinping knows that the Chinese women could very well lead a massive anti-CCP movement inside China. Hence, he has now resorted to putting a lid on surging anger among the Chinese people. But, that’s only going to make problems worse for the CCP.