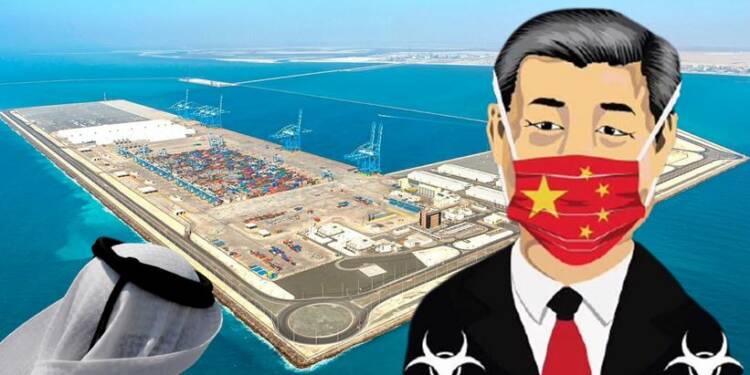 The United Arab Emirates is located in the Middle East, where it is a major player of the region. Now, China, which is located in Asia, dreams of global domination. Chinese President Xi Jinping has much in common with Adolf Hitler, who turned Germany into a superpower and killed innumerable Jews for his cause of racial purity. But how can China achieve global domination at a time when the world is placed squarely against it? Simple. China is building naval and military bases around the world. The only problem is, this joke of a country gets exposed every single time.

So, its geopolitical ambitions go only as far as funneling large amounts of money towards the construction of naval bases, at which point this funny nation gets caught, and the construction is stopped. It is a vicious cycle which China has trapped itself in.

China was building a secret naval base in UAE, without permission:

The most recent country in which China has been exposed, is the United Arab Emirates, and Abu Dhabi seems to have kicked the hell out of Beijing this time.

Also read: To save its F-35 deal with the US, the UAE is all set to dump China at all levels

The Wall Street Journal reported that satellite imagery of the port of Khalifa had revealed suspicious construction work inside a container terminal built and operated by a Chinese shipping corporation, Cosco. The evidence included huge excavations apparently for a multi-storey building and the fact that the site was covered in an apparent attempt to evade scrutiny.

According to CNN, the construction has been halted on a secret development inside of a Chinese shipping port near Abu Dhabi. The UAE embassy in Washington DC, meanwhile, issued a statement saying, “The UAE has never had an agreement plan, talks or intention to host a Chinese military base or outpost of any kind.”

According to the Guardian, the Biden administration raised the matter immediately with the UAE, which appeared to be clueless about China’s nefarious designs in one of its prime ports. In late September, the US national security adviser, Jake Sullivan, and the White House Middle East coordinator, Brett McGurk, went to the UAE and presented the details of the US intelligence on the site to the Emirati authorities. The construction of the Chinese base was stopped after a spot inspection by US and Emirati officials.

China is a country whose ambitions know no bounds. However, it has limited resources at its disposal. For example, China wants to be a global superpower, and it wants to unseat the United States from its position of influence. Yet, China operates a green water navy that is simply not capable of global ventures. By erecting naval bases around the world, and in strategic locations, China wishes to make a blue water navy for itself, which can challenge the United States every step of the way.

Whether it be Djibouti, Gwadar Port in Pakistan, the Hambantota Port in Sri Lanka – they have all been usurped by China in ways which would turn the stomachs of any human who has a beating heart. China tried doing the same with the UAE, however, got caught while at it, and has now been kicked out of the country.

Also read: China realises it cannot match India’s presence in the Indian ocean, shifts its focus to the Atlantic

For the United Arab Emirates, friendship and the strategic partnership with Washington DC is of utmost importance. And then, UAE is due to receive F-35 fighter jets from the US. As such, it is hardly dichotomous or conflicting for Abu Dhabi, to choose from between Washington DC and Beijing.

Furthermore, UAE does indeed have an axe to grind with China, as China had vaccine-trapped it and other Arab countries like Bahrain, along with a slew of developing countries. Trusting China, UAE inoculated large swathes of its population, yet there are no signs of herd immunity kicking in. In an act of astute brazenness, China offered exorbitantly priced booster shots of the China-made Sinopharm vaccine to the UAE, to make the vaccines more effective.

Now, China has been exposed internationally as a nation that misuses opportunities and the strategic assets of host countries without due permission and in complete contest of rules. The going is about to get very tough for China in the times to come.