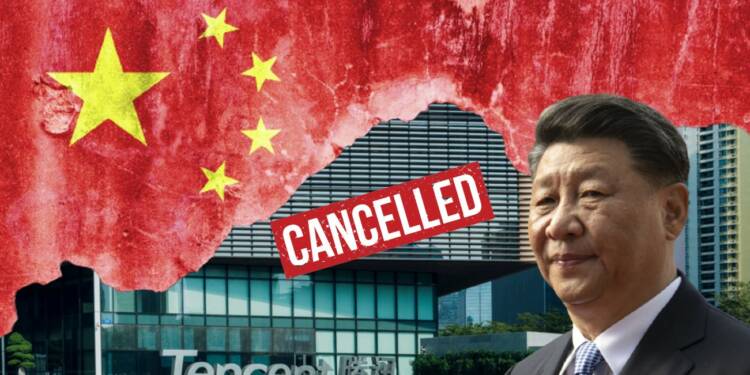 Chinese tech giant Tencent is being cut to size. Chinese despot Xi Jinping is making sure that Tencent does not remain a ‘giant’ for long and is reduced to an insignificant entity within China which is controlled entirely by the CCP. China’s ‘tech crackdown’ has been ongoing for over one year now. As part of the same, the Chinese government’s Ministry of Industry and Information Technology has reportedly instructed app stores and platforms to prevent Tencent Holdings from updating its existing apps and launching any new ones. Tencent Holdings runs over 70 apps and has published over 100 games under the Tencent Mobile Games banner. It also runs China’s WhatsApp rival WeChat, catering to around 1.2 billion users.

As per the CCP’s latest crackdown on Tencent, China’s Ministry of Industry and Information Technology must review any new apps and updates before they can be launched. In a statement, Tencent said, “We are continuously working to enhance user protection features within our apps, and also have regular cooperation with relevant government agencies to ensure regulatory compliance. Our apps remain functional and available for download.”

The CCP has also given a reason for its crackdown on Tencent. Let’s just say, it is flimsy and hypocritical. Chinese regulators have said they found several apps violating data protection rules on a number of occasions this year. The Chinese Communist Party is no fan of data protection and privacy. So, when the CCP says Tencent was violating rules of data protection, what it effectively means is that the Chinese tech giant was not satisfactorily fulfilling the CCP’s needs for users’ data. The Chinese regime keeps a track of the digital footprint and activity of all citizens, and as such, for it to say that Tencent violated data protection rules is simply comical.

The CCP is waging a multi-frontal war on Tencent. Not only has Tencent been disallowed from publishing new apps and coming up with updates for existing ones, but major Chinese state-owned companies are also restricting employees’ use of Tencent Holdings Ltd.’s popular domestic messaging app, citing security concerns.

According to the Wall Street Journal, this week, managers of at least nine state-run companies, including some of the nation’s largest, such as China Mobile Ltd., China Construction Bank Corp. and China National Petroleum Corp., told employees that any chat groups set up for work purposes on Weixin—Tencent’s dominant messaging app in China—could contain sensitive information and should be shut down and deleted.

And then, Tencent is also a part of a group of companies that have been asked to cough up 21.5 million yuan ($3.4 million) in fines by China’s competition watchdog. Individually, Tencent has been asked by the State Administration for Market Regulation to pay 500,000 yuan for each of the antitrust violations it has been found guilty of.

China could also be coming up with a “data tax” soon, in order to achieve Xi Jinping’s common prosperity goals. On target are companies like Alibaba Group Holding and Tencent Holdings, which utilize the massive amount of personal data they gather through their services. According to Huang Qifan, who previously worked as mayor of Chongqing and a Communist Party official on economic policy, the benefits gained from data should be returned to society as a whole, including to individuals who produced the data and not just specific stakeholders.

Xi Jinping had turned his eyes towards Tencent after he successfully ran Jack Ma’s Alibaba Group into the ground and brought it under the CCP’s control. The crackdown on Tencent began in January this year, as Huawei Technologies Co. – one of CCP’s favourite Chinese organisations excluded Tencent Holdings Ltd.’s games from its app store.

What Xi is doing is a manifestation of the typical Chinese Communist trait of encouraging the private sector to grow big and then harvesting private enterprises, after they have peaked in terms of growth.

Biden bullied MBS for about 8 months. And now MBS is taking revenge