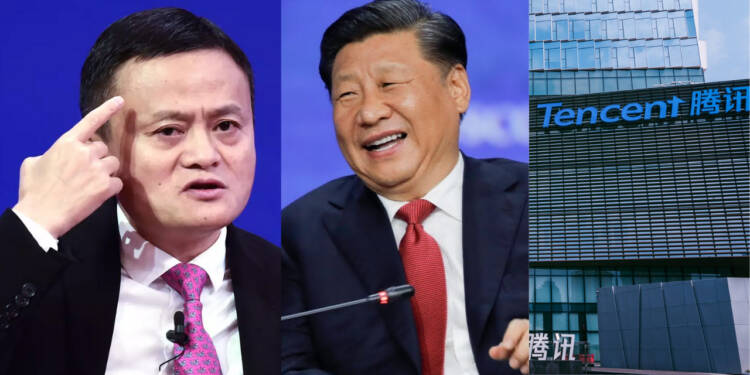 Tencent is losing business worldwide, its biggest game PUBG being banned in India, and it’s biggest social/instant messaging app WeChat being banned in the United States and India, not because of their failures as good businesses but because of Xi Jinping’s aggressive Chinese foreign policies. And now allegedly suffering from paranoia to lose his power in China, Jinping is bent on destroying the two companies that have driven Chinese growth for a long time.

2020 has been a year of disappointment for China’s diplomatic outreach. Its foreign advances blown to bits as Xi Jinping has failed to protect Chinese businesses in an increasingly hostile international structure. Tencent and Alibaba, two of China’s leading business firms are now being culled all around the world due to China’s aggressive diplomatic practices and now Xi Jinping is threatened for his position as the businesses are losing worldwide due to Beijing’s aggressive tactics. To secure his position, Jinping is strategically culling the big internet giants to and its Tencent’s turn to pay the price for being a big successful ‘Chinese’ company.

According to an official announcement posted on Huawei’s gaming app, the action was taken after Tencent made a “big change” on Dec. 31 to how the companies interact with each other. It didn’t comment on the move in detail.

Although most smartphones in China use Google’s Android operating system, the Google Play Store is not used and apps are sold by mainland manufacturers and others on their curated platforms. According to Counterpoint Report, Huawei was the country’s largest smartphone maker during the September quarter with 43 per cent of shipments.

Huawei said that its decision was followed by its legal team’s evaluation and was based on the belief that Tencent was arbitrarily calling for a halt to cooperation. An analysis of Huawei’s app store revealed that Tencent games are no longer available, such as the Chinese edition of Arena of Valor.

Bloomberg‘s queries revealed that Tencent’s game products were deleted from the app store in Huawei early on Friday after the promotional deal between companies expired before a new agreement could be reached.

A Tencent spokesperson said, “We are communicating and negotiating with Huawei’s mobile game platform for a solution, and hope to resume our services soonest possible.”

China’s failure to resolve diplomatic issues has cost Tencent a lot of business. China’s aggression shown at the LAC became one of the reasons as India culled Chinese apps from its fledgeling mobile application market. Tencent became one of the biggest losers as its mobile gaming application PUBG was banned along with We chat, another major Tencent product.

Read More: Xi Jinping is making sure that China doesn’t see the rise of another Jack Ma

In the US, President Donald Trump banned WeChat, as it had become a threat to national security. WeChat is China’s biggest social/instant messaging app.

To have lost a developed market in the USA, and a developing yet very fledgeling market in India in a short period would have had a significant impact on Tencent’s riches. Moreover, it is not because they failed to deliver that cost them but it was the Chinese authoritarian Xi Jinping’s diplomatic failings that cost the company.

While Chinese companies are loyal to the CCP, the losses incurred are massive. But despite the lack of any certain provocations, Xi Jinping is wilting away at these two giants of China’s internet industry to secure his position.

While the Ant group has already suffered at the hands of the authoritarian Chinese state by being denied an IPO worth billions of dollars, Xi Jinping has personally taken an offensive against Alibaba and Jack Ma as the Chinese state has opened anti-trust probes.

And now it seems the focus seems to shift to Tencent. Huawei is allegedly one of CCP’s most favoured companies and its decision to delete Tencent gaming apps is a signifier of CCP’s actions. The decision will cost Tencent a boatload of money as Huawei is China’s biggest mobile manufacturer and holds almost 42% of all Chinese mobile manufacturing.

After already losing the USA and Indian markets, Tencent is facing an empty barrel after Huawei deleted its app. Jinping’s paranoia of losing his seat as the party ‘chairman’ is hurting Tencent’s business and he is committed to bringing both these companies to their knees which would ultimately lead to a downfall of the Chinese economy which has stagnated, most probably, beyond repair.