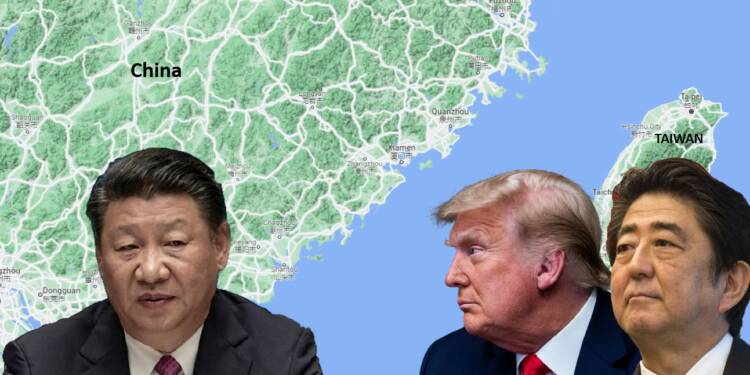 Former Japanese Prime Minister Shinzo Abe and former US President Donald Trump have made a major prediction that could leave Chinese President Xi Jinping befuddled. The two leaders have suggested that China and Taiwan could go to war, which would naturally drag the US and Japan into the conflict and trigger the annihilation of the Chinese Communist Party (CCP).

Former US President Donald Trump has predicted that something big will happen after China hosts the 2022 Beijing Winter Olympics. Trump warned that China could attack Taiwan after it organises the multi-sports event. In an interview with a former UK MEP, the Republican leader said that China’s behaviour changed after he left office.

Trump’s remarks do make a lot of sense. Beijing’s behaviour has been warlike with Chinese warplanes making 159 incursions into the Taiwanese air defence zone in November. Chinese President Xi Jinping is trying to mobilise his military resources on the Taiwan front and exhaust the island nation’s resources. Ultimately, China might want to strike Taiwan only when the island nation gets overstretched in handling Chinese aggression.

The timeline that Trump has given is based on a clear understanding of how China thinks. Xi is a narcissist who harbours world domination dreams. He is quite passionate about organizing the 2022 Beijing Winter Olympics successfully. He views the multi-sports event as a major occasion to propagate his image as a world leader.

In fact, the event is so close to his heart that Xi hasn’t left China in the last 21 months. The Chinese President wants to make the Winter Olympics next year all about himself and shore up his soft power all over again. Till then, Xi won’t make any controversial moves but once he is done with the 2022 Winter Olympics, the Chinese President will pursue all his goals including the invasion of Taiwan.

Trump, on the other hand, seems to have decoded what the Chinese President Xi Jinping is up to.

Trump has already warned that Taiwan and China could end up locking horns very soon. Shinzo Abe too seems to agree, but he has also warned of the consequences that China will have to face if it attacks Taiwan.

Abe made one thing clear- if China tries to take on Taiwan, then it will also have to face two of Taiwan’s mighty friends- Japan and the United States of America. The consequences will be disastrous for the Chinese Communist Party, as Japan and the US will totally isolate the Chinese economy and instigate a socio-economic revolution within China effectively devouring the CCP.

On Wednesday, the firebrand Japanese leader minced no words while issuing an explosive threat of war to Xi Jinping and the Communist Party of China. He castigated the Chinese President by taking his name, called him a mere “Secretary” and not President, and warned him of serious economic consequences should the paranoid leader ever think of endangering Taiwan’s sovereignty.

Leaving no room for ambiguity and without betraying the emotions of millions of Japanese, Abe told Jinping that “peace is the only option” for China. He said, “A military adventure would be the path to economic suicide. We must keep reiterating that peaceful ties between China and Taiwan are the only option.”

And then there was no stopping the former Japanese Prime Minister. There was nothing that could stop him from making Jinping shiver. He roared, “The emergency in Taiwan is the emergency in Japan. It is also the emergency in the Japan-U.S. alliance. Beijing, especially Chairman Xi Jinping, there must be no misunderstanding about this.”

Trump and Abe, the two flamboyant leaders who have led their respective countries against Chinese hegemony in the recent past, have clearly intercepted China’s Taiwan plans. And now they have also rung the death knell for China over the little island nation.