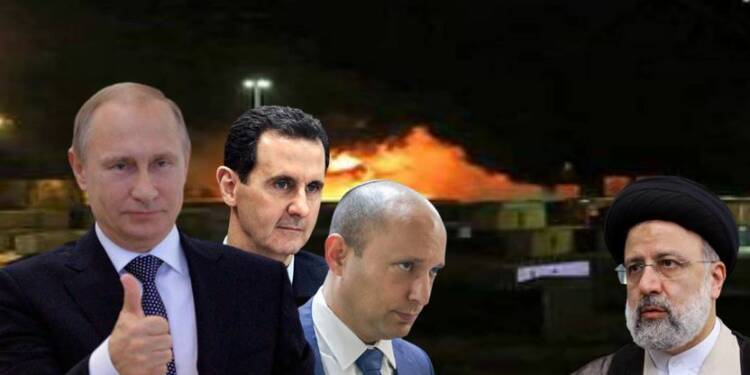 Early Tuesday, the Syrian port of Latakia suffered massive bombardment by the Israeli Defense Forces in a highly irregular attack. Local sources confirmed that the attack took place at 1:20 AM, and five blasts were heard before a huge fire erupted in the containers area. Times of Israel reported that secondary blasts had also occurred, caused by the arms inside the depot detonating.

Why is the attack on Latakia port unprecedented?

Latakia port is not a usual target for Israel for two reasons. Firstly, it is a vital port for the Syrian economy, since most of the country’s exports and imports are rushed through here. Secondly, the port lies in close proximity to a Russian naval base operating on Syrian soil.

On 26 August 2015, in Damascus, Russia and Syria signed a treaty, effective forthwith, that stipulates terms and conditions of use by Russia of Syria’s Khmeimim Airport, free of charge and with no time limit.

How does this attack affect Iran?

Israel generally refrains from attacking the port, considering the Russian military presence in the region. However, this has also provided Iran with the luxury of transferring arms and weapons to its militias and Hezbollah through this port.

Banking on the delicate relationship between Moscow and Jerusalem, Iran shrewdly restricts its arms-transferring activities to the Russian-controlled regions. However, the recent Israeli attacks on the Latakia port affirm that Israel may have conducted these operations with impunity from Russia.

Under the “de-conflicting mechanism”, Russia in October had allowed Israel to carry out airstrikes on Syrian soil without inviting any response from Russia. Naftali Bennett of Israel had then held five-hour long discussions with President Vladimir Putin of Russia. Although Israel and Russia back opposing sides in Syria, the equations are fast changing with Syria’s rapprochement with the Arab world.

While Russia is covertly backing Israeli airstrikes in Syria, it is also pressing Jerusalem to get the US to relax its sanctions on the Russian firms operating in Syria. As per an Axios report, Moscow wants to make deeper inroads into the Syrian economy, by taking over numerous reconstruction projects, thus helping its companies boost their revenues.

Death of Iranian interests in the region:

The emerging Russian-Israeli partnership in Damascus heralds a bleaker future of Iranian interests in Syria. Israel views Iran as an existential threat, with reports indicating that Jerusalem is in the works of stocking up weapons and military assets to launch a military offence against Iran.

Syrian President Bashar al-Assad had recently shunned the commander of Iran’s Quds Force in the country after he almost caused an “unwanted regional war” with Israel. According to AlHadath, a Saudi television network operated by Al Arabiya, Mustafa Jawad Ghafari had been “excluded” over a series of actions he took, that was viewed by Bashar Assad as “a major breach of Syrian sovereignty at all levels”.

Iran reaped the benefits of the massive Russian military presence in the region for years, enabling it to strengthen Hezbollah and to secure Iranian interests under Moscow’s umbrella. But that luxury is no longer available. Iran is now helplessly exposed to Israel’s attacks and offences.

Syria wants to re-enter the Arab league, and thus wants Israel on its side, considering the Jewish nation’s sway over the UAE and other Arab states. Jordan, Egypt, the UAE, Saudi Arabia and Oman – all these nations have now made overtures to Damascus.

Also read: Syria breaks up with Iran as it openly flirts with Israel

All of their efforts to reignite ties with Syria and the Assad regime are reportedly being driven by Russia, which wants to set a consolidated support base for itself in the Middle East, and it is not possible unless it ensures Syria’s return to the Arab League.

So, it won’t be long before Syria is re-included into the Arab League, and that would simply mean a screeching death of Iranian interests in the country. Iran has spent a humongous amount of money and resources to set a foothold in the region.

Syria serves as Iran’s gateway to Hezbollah and also as another front to ramp up military pressure on Israel. Syria is one of the few key allies of Iran in the Arab world, and Syria’s normalisation of ties with Israel and the Arabs would simply render the Syrian-Iranian ties utterly defunct.

Hence, Israel is getting even bolder with each passing day. Amid the USA’s strong push for rejuvenating the Iranian nuclear deal with Tehran, the Jewish nation has gotten considerable backing from Russia and the Arab world. All in all, the emergence of the Russia-Israel-Syria triad in the Iranian backyard reeks of the imminent death of the Iranian and American interests in the greater Middle Eastern region.

Apple — The most Chinese American company