Rural China is rising, and Urban China is collapsing 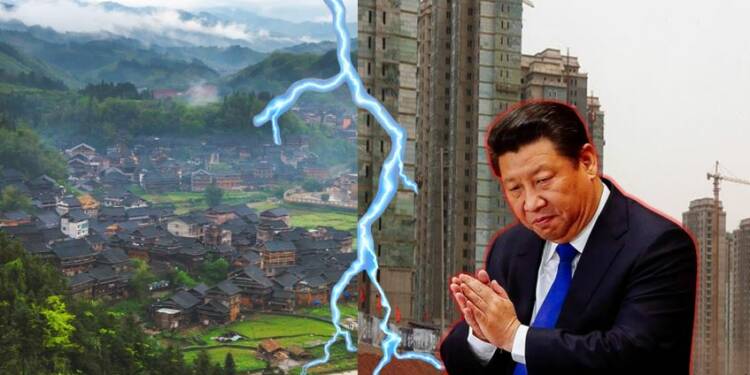 China is fast emerging as a hellhole for luxury brands. President Xi Jinping’s “Common Prosperity” campaign has weighed down the once-flourishing luxury stocks. According to Bain, a management consulting services firm, China accounts for 35% of all luxury sales worldwide. Bain expects China’s shares in global luxury sales to rise to 50% by 2025. But that was before the Xi Jinping administration started cracking down on private capital holders in the country.

Being rich in new China has become a taboo. People are refraining from flaunting their wealth and avoiding spending excessive money on buying luxury products. On the contrary, a curious trend is emerging in the Chinese stock markets. Investors are flocking to those shares that deal in products related to low-end and cheaper goods produced for consumption in rural China.

Anything luxurious and flashy will surely invite strict scrutiny from the Chinese regulators, but investing in staple and durable goods (meant for consumption by the poor and rural Chinese) will be awarded by the Chinese government.

This is Xi Jinping’s way to achieve “common prosperity”. His policies focus on bridging the gigantic rich-poor divide in China, and that risks reducing China to a mere low-end good producing economy.

“The two words, common and prosperity, should be viewed individually in order to grasp the full breadth of the goals,” Kinger Lau, a strategist at Goldman Sachs Group Inc, was quoted as saying in a LiveMint report. “While income redistribution is important, sustainable growth and prosperity through upgraded technology is equally if not more important – this is needed in order to have something to redistribute.”

This simply means one thing – manufacturers and companies trading in cheap goods, household appliances, and food and beverages, will face little challenges in the times to come. On the flip side, luxury goods including the automobile sector, jewellery and top-shelf liquor, may face existential threats.

Investors have now realized this new way of survival in the tumultuous Chinese stock markets the hard way, and that reveals that the Chinese rural economy is sure to get a massive boost under Xi Jinping’s common prosperity campaign. But the question that bulks larger over the Chinese economy is: What is the cost of this rural upliftment in China?

Rural China to grow at the expense of urban China:

The truth is that rural China is bound to grow at the expense of urban China. Sky-high inflation, strict Covid-prevention measures, and stronger indications of stagflation in the Chinese economy, have turned Chinese cities into undesirable places to live in. Energy crisis, food crisis, plummeting savings and sinking economy have added to their miseries and woes.

The businesses that once provided employment and earnings to the Chinese cities are no longer up and running. The tech sector that drove the nation’s economic growth post the 2010s, is gasping for investors and capital inflow. The real estate sector that was once dubbed as the engine of the Chinese economy is now mired in back-breaking debts and ensuing defaults.

Xi Jinping is cracking the whip on rich Chinese, and that means Chinese cities could soon go dark and lifeless. Chinese cities are what made China today a robust economy and the world’s largest trader. But an ignorant CCP is adamant about stripping the rich Chinese living in cities off their wealth and properties – take China’s new taxation policy for example.

Earlier this year, Xi decided to introduce a nationwide property tax with the idea that it would curb housing sector speculation. Xi even had a slogan to push through his plan – “Housing is for living, not for speculation.” However, as per Wall Street Journal, the plan of a nationwide property tax to control speculation in housing projects and deflate the real estate bubble faced opposition from Communist Party elites and its rank-and-file members.

Also read: Rich kids of China cannot flaunt their wealth, because Jinping will look for them, find them and target them

Initially, he wanted to impose property tax in 30 cities, but with negative feedback, it has been significantly scaled down to just the top 5 or 10 cities. The city of Hangzhou, in the wealthy province of Zhejiang, and the capital city of Beijing, are expected to be added to the pilot-tax program. However, the move has stirred tremendous anxiety among house owners in all the metropolitan cities. They are now desperately selling their properties in Chinese cities in the quest to evade the hefty property taxes that the CCP plans to levy anytime soon.