Putin dumps Jinping to give India S-500s first. Modi snubs Biden to go ahead with Russia 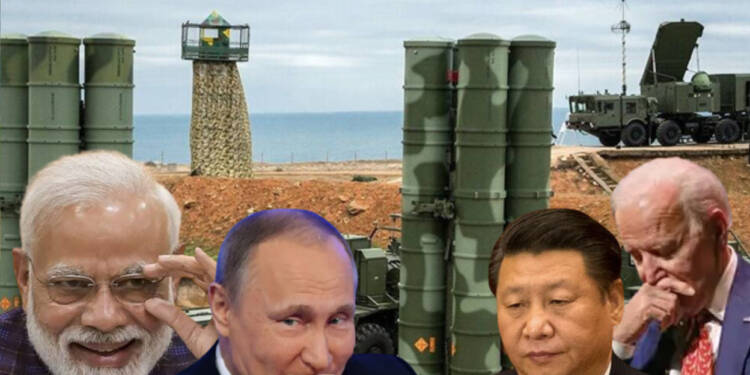 India could be the first customer of Russia’s super-advanced and lethal S-500 Prometey surface-to-air missile defence system. India has just begun receiving deliveries of the S-400 Triumf surface-to-air defense systems. Already, the United States of America – under the leadership of Joe Biden, is rattled. Russia is the ultimate foe of Democrats, and the unprecedented defense and strategic partnership between New Delhi and Moscow pricks Washington in the eye like a painful thorn. Yet, notwithstanding the discomfort and reservations of Joe Biden and his administration, the India-Russia bonhomie is being put on full display. The United States actually shares the stage with China in envying the heightened cooperation between India and Russia.

Read more: Wang Yi goes down on one knee to placate India after the grand Modi-Putin spectacle

Ever since the US brought the sanctions-triggering Countering America’s Adversaries Through Sanctions Act (CAATSA) and Turkey was sanctioned for buying S-400 from Russia — there have been apprehensions that Washington may impose similar punitive measures on India. However, for Russia to offer its most advanced defense system – the S-500 to India is definitely a move aimed at rubbing salt over Washington’s wounds. And then, it is not as if India will not seriously consider acquiring the supreme air defense systems for its own security against an ever-belligerent China and a rogue Chinese client-state in the form of Pakistan.

With one statement, Russia has made its intentions vis-à-vis China clear. It must be remembered that China is already in possession of the S-400 air defense systems. However, by making it clear that India would be at top of the list when Russia begins exporting S-500 systems, Vladimir Putin has signalled how he wishes to arm New Delhi against Beijing. Moscow is indicating to Xi Jinping that India figures much more prominently in Russia’s geostrategic considerations than China.

By arming India with the S-500 systems before any other country, Russia wants to provide New Delhi with a kind of aerial supremacy that is matched only by itself in Asia. And that will definitely give Xi Jinping numerable sleepless nights on end.

The S-500 surface-to-air missile defense system is capable of intercepting intercontinental ballistic missiles (ICBM). It can also target hypersonic cruise missiles and can intercept ballistic missiles within a range of 600kms. The S-500 anti-aircraft missile system is designed to strike all existing and future aerospace attack weapons of a potential enemy at all altitudes and speeds.

China has earned quite a reputation for itself. It is a serial plagiarist, which has built its own defense manufacturing industry relying solely on stolen technologies and intellectual properties from around the world, including Russia. It also engages in brazen reverse-engineering and uses weapons and systems which Moscow has exported to it, to build its own similar armaments. This has infuriated Russia, which is why Putin has decided to offer India the S-500 air defense systems.

India has gone ahead with the S-400 deal with Russia despite the threat of CAATSA sanctions looming over it. Importantly, New Delhi seems to have forced Washington to buckle, which is why the Biden administration has reportedly decided not to sanction India. And why did India stick to its position and defend its right to acquire weapons from an ally like Russia? Because India’s foreign policy and national security are not subject to Washington’s whims and fancies.

Recently, Russian President Vladimir Putin visited India. Vladimir Putin had not stepped out of Russia ever since the Covid-19 pandemic set in, except for when he flew to Geneva for a summit with Joe Biden. On December 6, however, Vladimir Putin flew down to India for a five-hour visit, during which he met his friend, Prime Minister Narendra Modi, and oversaw the inking of at least 28 bilateral agreements.

In his televised opening remarks at the summit, Putin described India as a “great power” and a time-tested friend, and said Russia works with India in the military-technical field “in a way that we do not work with any of our partners”.

On his part, Prime Minister Modi said that this was Putin’s only second foreign visit since the start of the Covid-19 pandemic and that it reflects his personal commitment to bilateral relations. Modi also said that the India-Russia friendship has “remained a constant” despite many fundamental changes on the world stage, and the two countries have cooperated closely while paying attention to each other’s sensitivities.

Read more: How Modi and Putin gave third-degree burns to Biden with a cleverly orchestrated event

The snub and accompanying finger to Joe Biden could not have been more prominent. India and Russia are making no secret of their bromance, and the United States, as well as China, find themselves sulking in the same corner as a consequence.
Tags: Exhaustive ReadsIndiaJoe BidenModiRussiaS-500Vladimir PutinXi Jinping
ShareTweetSend
Previous Post

Jinping slashes CCP Members’ salaries by a third, a move that can be the end of the Dictator