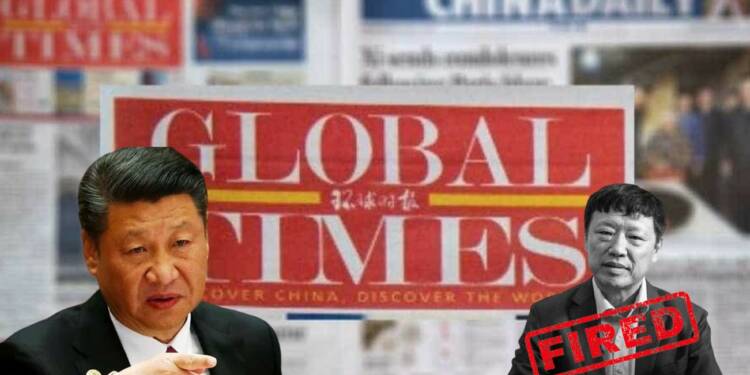 Do you know Hu Xijin? He’s famous, let me tell you that. Within China, the man is a sensation. Globally, he is a joker masquerading as a jingoistic Chinese commentator and journalist. Hu Xijin has been the editor-in-chief of the Global Times – which is the Chinese Communist Party’s pet media outlet. As a state-controlled media outlet led by a man of Hu Xijin’s stature, Global Times was more of a hilarious pamphlet – threatening entire countries and their leaders. Now, however, Hu Xijin has been sacked. He has been unceremoniously kicked out of the Global Times by the CCP. To hide his shame, the man has claimed that he is ‘retiring’.

Hu Xijin made a brief post on Weibo, which is China’s version of Twitter, announcing his retirement. He said, “After the New Year, I’ll be 62 and will have arrived at my retirement age. I’ve handled the administrative work for my retirement, and will no longer be the editor-in-chief of the Global Times.” He added, “However, I will from now on be a special commentator for the publication, and continue to contribute to the Global Times and do my best and give my utmost for the Communist Party’s news outreach.” Hu also thanked his readers for their support, encouragement, and criticism. Essentially, Hu Xijin has been demoted from the editor-in-chief of Global Times to a mere commentator for the Global Times, which effectively means that he will now be quoted among the many ‘experts’ that the publication has in its stable.

Why has Hu Xijin been Sacked?

Speaking against the CCP is a cardinal sin in China. For decades, Hu Xijin has not dared utter a word against the CCP. But last month, the man slipped. Hu could not contain his emotions any longer, which overflowed in a November 2 article titled, “Frontline media need to be trusted to carry on mission.” Here, Hu Xijin not only underscored the media’s indispensable contribution towards the country’s stability but also dropped a subtle threat to the CCP if Chinese media continues to get the step-motherly treatment from the state leadership.

Hu Xijin did not betray his emotions while penning the anti-CCP piece, probably the first time in his career. He wrote, “I feel deeply that it is becoming more and more difficult to do media.” He then added, “frankly speaking, media practitioners have been subject to increasing restrictions for some time. Most of these interventions have come from government departments and local governments other than the publicity department, as well as various influential institutions.” Soon after the article began being read on a large scale in China, the CCP scrambled to delete it from social media and erase all digital footprints belonging to the piece. Hu Xijin had just committed a crime, for which he was about to pay soon.

Read more: Global Times Chief Editor Hu Xijin accuses the CCP of censoring the media and even drops a threat

And pay he did, by being sacked from Global Times.

Hu Xijin’s Decades-old Loyalty and Love for the CCP Goes Down the Drain:

Hu Xijin is a romantic at heart. He loves the CCP. Throughout his professional career at spreading and creating propaganda out of thin air, the man has ensured that he is seen as the CCP’s top loyalist. And for his unflinching services, the man was duly awarded by CCP. It was said that Hu Xijin was the only man to have unlimited freedom of speech in China. But last month, he misused that right, which is why he has now been dismembered out of Global Times by the Chinese regime.

Hu Xijin was a combatant. He fought hard while defending the CCP internationally. He was a famed propagandist – but one article against the CCP has destroyed his escalating career. Hu still had so much more fight in him. On behalf of the CCP, it was Hu Xijin who threatened countries. His remarks could even change the mood of international markets!

Whether it be waging a war against the U.S. and its allies over Taiwan or defending China’s intellectual property theft – Hu Xijin did it all. He warned that if Britain infringes Chinese sovereignty in the South China Sea then it will be treated like “a bitch” who is “asking for a beating”. He has compared India to a “bandit” that has “barbarically robbed” Chinese companies. He referred to Australia as nothing more than “gum stuck to the bottom of China’s shoe”.

For China’s wolf warriors, Hu Xijin was a guiding light. But alas, his run as China’ chief propagandist has come to a rather screeching halt. The man definitely has a broken heart now, but it is much better than having broken bones – and he realises this.