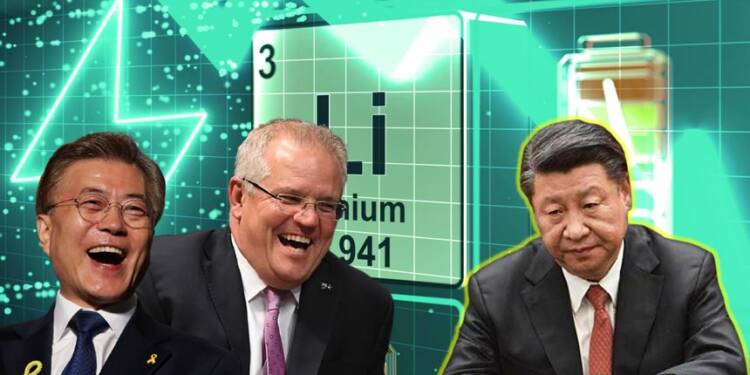 If you are a battery manufacturer, you can’t afford to pick a fight with Australia. That’s because Australia dominates the supply chains critical for any battery maker. Australia boasts one of the biggest reserves of rare earth minerals. Australia houses almost 25% of the world’s known lithium reserves. For Nickel and Cobalt, the number stands at 20%.

South Korea to become the “Battery King” with Australian auspices:

Mind the fact that all these elements are indispensable for battery manufacturing. All in all, Australia can make or break these supply chains at its will and pleasure. And now, Australia and South Korea have joined hands to make South Korea the “battery” king of the world.

South Korean President Moon Jae-in became the first world leader to visit Australia, after relaxation in the Covid protocol. On the 13th of December, South Korea and Australia signed a Memorandum of Understanding (MoU) for collaboration in critical supply chains.

Also read: Egypt invited China to set up a massive EV plant in their country and then sent them back

“Our two countries share the view that establishing a stable mineral supply chain is important not only for the two countries, but also for the global economy,” Moon said.

Earlier this year, Moon had said that South Korea will strive to become a global battery manufacturing powerhouse by 2030, part of a plan to be carbon neutral by 2050.

In July, Moon had told the Korea Economic Daily that “batteries are the backbone of the Korean industries that hold the future of the country. We should sharpen our competitiveness to overtake our bigger rivals and further widen the gap with our followers.”

The competition between South Korea and China in the battery manufacturing sector is cut-throat. South Korea dominated the world battery sector in 2020 with an impressive 38% share in the global market. At that time, China trailed at a mere 24%.

However, things turned upside down in 2021. In the first four months, China climbed to 43%, while South Korea fell to 31%. South Korea is not pleased with losing its status as ‘the battery king’ to China. So, it is roping in the world’s biggest rare earth powerhouse, that is Australia, to cement its position as the battery powerhouse of the world.

‘You scratch my back and I scratch yours’: this is what is happening in the South Korea-Australia relations. The two nations recently inked a billion-dollar defence deal to provide Australia with equipment like artillery weapons, supply vehicles and radar.

This is the largest defence deal Australia has ever clinched with an Asian nation. So, South Korea is helping Australia boost its defences against China, while Australia is helping South Korea solidify its battery manufacturing sector. In both cases, the victim-to-be is none other than China.

Best Glory quotes to recognise glory and be inspired

Germany’s New Israel policy is here and 1 line summary of it is – “Screw the Iranians”!