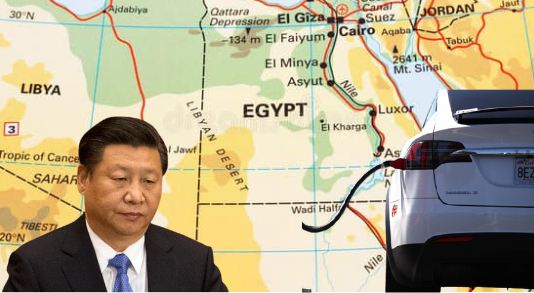 China’s Middle Eastern adventure is fast turning into a disaster. What China faces in the Middle East is an image crisis. While the United States is facing its dilemma and crises in the region, Russia is making rampant progress in establishing influence over the Arab world. China, until recently, or perhaps still, considers itself an influencer in the Middle East. However, the latest setback to China has come from Egypt, which has shown the door to China’s electric vehicle industry. Three years ago, an unsuspecting Egypt had welcomed China’s electric vehicle industry with open arms. In a post-Covid world, however, China is looked at as a menace and a headache that no country wants to entertain.

So, China’s crisis-ridden electric vehicle industry has now suffered a setback in Egypt. The Egyptian Ministry of Public Works announced in a statement on November 11 that “negotiations with Dongfeng to produce the E70 electric car, in cooperation with Al Nasr Automotive Manufacturing Company, affiliated with the Ministry, have stopped.”

The ministry said the reason behind the halted negotiations was “the inability to reach an agreement with Dongfeng to sufficiently reduce prices of the imported parts that are needed to manufacture the car and enable Al Nasr Automotive Manufacturing Company to manufacture cars and offer a competitive and attractive price for consumers.”

Read more: With Egypt on its side, Russia aims to kick China out of Suez Canal

According to AL-Monitor, Egypt has now opened channels for other alternative electric vehicle players to compete for the spot which China’s Dongfeng has been kicked out of. In its statement, Egypt’s Ministry of Public Works said, “new channels of communication have been opened with one of the specialized global consulting offices to identify an alternative partner, and positive results are expected to be reached before the end of November.”

Many things are wrong with China’s electric vehicle industry. Lack of talent, the energy crisis in China, debt-ridden companies and a general business-hostile environment are among the main causes for China’s EV industry going bust. Chinese EV startups like the New York-listed Chinese upstart Nio Inc. have not been profitable since their inception. On top of China’s EV woes, the power outages in China are destroying its capability and infrastructure to maintain a huge Electric Vehicle industry.

Power blackouts in over 10 Chinese provinces across the Chinese mainland are likely to discourage the people of China from shifting to EVs. Meanwhile, the recent suspension of charging stations in parts of China kept some battery-powered cars off the roads.

And then, despite the ridiculous amount of cash that is pumped into China’s EV sector, major companies fail to take off. Evergande Group had made it to the news last year over an unsuccessful Electric Vehicle venture. In April, Bloomberg reported that China Evergrande New Energy Vehicle Group Ltd., an Electric Vehicle startup set up by the real estate major worth $87 billion greater than Ford Motor Co. and General Motors Co. failed to sell even one automobile.

Like China’s automobile industry, its EV industry survives on plagiarism. Chinese companies steal electric vehicle designs from the likes of Tesla and other global manufacturers, only to be snubbed by the Chinese people.

Egypt, therefore, has taken a wise decision of not getting entangled with the Chinese EV industry, owing to the mess it today finds itself in. Egypt’s snub to China could not have come at a better time.