Looks like the US has made a choice between Turkey and Egypt. And it’s the obvious one 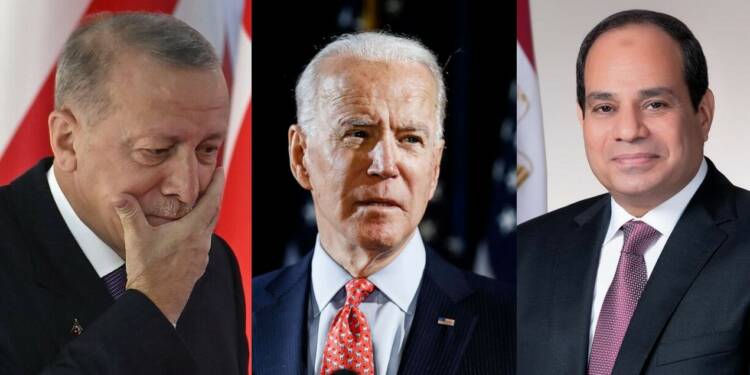 Progressives within the Democratic Party have been pushing Joe Biden to act tough on Egyptian ruler Abdel Fattah El-Sisi, who they say has imprisoned tens of thousands of dissidents. Joe Biden readily follows the far-left agenda. However, Egypt proved to be a tricky call for him to make. The United States has been cold-shouldering Egypt ever since Joe Biden took over as President. Parallelly, Egypt has been climbing up the ladder in the Middle East at an enormous pace. Today, Egypt is recognised as one of the most mature powers of the region – and one which advocates the cessation of all forms of violence in countries of the Middle East.

Of course, that might itself be a reason why Democrats hate Egypt – since their military-industrial complex is heavily contingent on the continued warring between various powers of the region. However, Egypt has grown just too big a power to ignore. So, a dejected Biden administration is finally talking to Cairo.

The US and Egypt, on Monday, held largely symbolic talks aimed at bolstering bilateral cooperation. The dialogue is the first to be held under US President Joe Biden’s administration and the first since 2015. It follows a meeting between Secretary of State, Antony Blinken, and Egyptian Foreign Minister, Sameh Shoukry, on the sidelines of September’s UN General Assembly in New York.

According to Secretary of State Antony Blinken, the talks on Monday covered issues of regional security amid several crises, as well as joint efforts to address climate change, COVID-19, and “making tangible, and lasting improvement on human rights.” In an important statement after the talks, State Department spokesperson Ned Price said, “Secretary Blinken also expressed appreciation for Egypt’s role in supporting regional stability, including its continued work to de-escalate tensions in Gaza and efforts in support of UNSMIL in Libya. The Secretary underscored the US government’s commitment to Egypt’s water security.”

This shows how the United States knows Egypt has grown too powerful and influential to ignore, and that Washington can no longer remain indifferent to Egypt’s water concerns. The U.S. has complained about Egypt’s human rights record for years and the Biden administration has even gone to the extent of withholding $130 million in military aid to the country pending improvements.

Choice Between Turkey and Egypt – A No Brainer for the USA:

Turkey is the only power in the region at par with Egypt. Additionally, Turkey and Egypt are on opposite sides on practically all matters that concern the Middle East. Whether it be recognition for Israel, or the Libyan war, Egypt and Turkey find themselves in conflicting positions almost always. To top it all, Turkey is a NATO ally – which means it is an American ally. However, Turkey’s recent actions and the statements of its President, Recep Tayyip Erdogan have widened fault-lines between Washington and Ankara.

Therefore, the U.S. was really forced to begin the process of mending ties with Egypt, as the Biden administration no longer wants to be seen as sympathetic to Turkey. This was really the only sane choice for the U.S. to make. Choosing between Egypt and Turkey is a no-brainer. Any sane country would always pick Egypt over Turkey since, unlike Erdogan, the Egyptian President is not a madman.

Egypt is a much more responsible ally to have for the United States than Turkey. It makes no sense for an FATF grey-listed country like Turkey to remain a part of NATO. Turkey’s brazen support for the Muslim Brotherhood, its support for Islamist forces of varying shades and its involvement in severe conflicts of the region – in all of which it is on the wrong side really makes Turkey’s banishment from NATO an immediate requirement.

However, the United States under Joe Biden has been evading this scenario altogether. Yet, Egypt has been working continuously for regional stability and peace, despite allegations by lunatic liberals that El-Sisi is a human rights violator. The Egyptian President recently revoked a nationwide emergency in force since 2017, thus proving his international detractors wrong.

The USA Does Not Have Many Friends in the Region:

When it comes to the Middle East, the Mediterranean and North Africa, the United States does not really have any friends. Washington has been withdrawing from the region steadily, and a vacuum is emerging. Most Arab powers, especially Saudi Arabia and the UAE are not liking this vacuum. The U.S.’ retreat emboldens not just Iran, but also Turkey.

Given how things are panning out in Ethiopia and the Horn of Africa in general, apart from Turkey’s growing belligerence in the Mediterranean, the United States suddenly found itself in desperate need of regional friends who would help Washington remain relevant in this part of the world. Nobody except Egypt can offer that kind of a partnership to America, and Joe Biden knows it very well.

Egypt Has a Gun to Biden’s Head:

It is not like Joe Biden woke up one day and decided to establish contact with Egypt. As reported by TFI, in June this year, Cairo dropped a big bombshell in Washington DC.  During a visit to Washington last month, Egypt’s spy chief made a claim that startled U.S. lawmakers already worried about human rights in the Middle Eastern country.

According to Abbas Kamel – the Egyptian spy chief, the United States had promised back in 2015 that if Egypt released activist Mohamed Soltan, he would serve out the rest of his life sentence in a U.S. prison. However, Kamel claimed that despite a written assurance by the United States, which he produced before Capitol Hill staffers and other senior officials, activist Mohamed Soltan was free and living in Virginia, when he should have been serving a life sentence at a U.S. prison.

The Egyptian official even handed the document to Hill staffers, which appears to be a signed agreement between Egyptian and American officials laying out such an arrangement. To make matters worse, the document dates back to the Obama era.

So, Biden really seems to have weighed the pros and cons on this one, and going by his initiation of talks with Egypt, has made perhaps the first right foreign affairs choice of his tenure so far.

Shinzo Abe has stormed back into Japanese politics. In Style