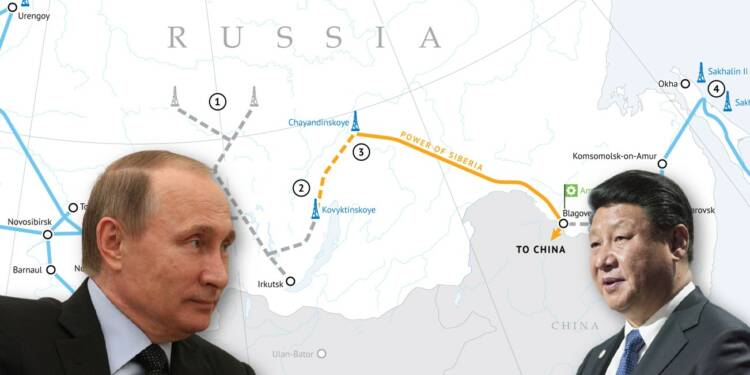 Vladimir Putin is someone who takes historical facts really seriously when it comes to making geopolitical calculations. And it is a fact that the Chinese Communist Party sided with the USA to contain the then Soviet Union. Not only this, China has continued to claim parts of Russian territories in the Far East as well as other bordering areas. It has been widely accepted that the relation between Russia and China is an alliance of convenience. This is why Putin wants to make sure that Beijing is dependent on Russian gas exports so that any backstabbing from Xi Jinping can be mitigated.

Preliminary talks on the Power of Siberia 2 pipeline, which will transport 55 billion cubic metres of gas to China, are moving quickly. Presidents Xi Jinping and Vladimir Putin discussed the idea earlier this month, and Putin claims that a feasibility study will be completed in a matter of weeks. According to the Nikkei Asia Review, the pipeline would assist both countries to mitigate tensions with the West. However, for Russia, it will fulfil other objectives as well; the most important of them being, turning Communist China into an energy-dependent client state.

China’s concerns of energy security and the Russian solution

Although the price for Power of Siberia-2 must still be agreed upon by Moscow and Beijing before construction can begin, industry observers told Nikkei Asia that the two sides appear to be close to reaching an agreement. They believe the long-awaited pipeline will not only enhance Russian gas deliveries to China, which has been hit hard by energy shortages this year but will also diminish Moscow’s reliance on European markets and Beijing’s reliance on maritime routes controlled by US warships.

While Europe’s 541 billion cubic metres of gas consumption is far higher than China’s 331 billion cubic metres, the latter’s use is predicted to climb to 526 billion cubic metres by 2030 as Beijing reduces its reliance on coal-powered electricity and expands its domestic chemicals sector. With domestic output in both regions currently about 200 bcm, China is depending on output to rise by more than half to avoid becoming reliant on imported gas like Europe.

When viewed in this light, the two Power of Siberia pipelines might offer Russia a position in China’s gas imports that is practically as important as it is for Europe. Currently, China only buys a small amount of Russian piped gas, with LNG still accounting for a larger percentage of trade last year as the first line was being built to capacity. Once completed, however, they’d carry a combined 88 bcm, equivalent to 44% of a roughly 200 bcm import sector. That’s not so different to Europe’s relationship with Moscow, which supplies about 51% of its imported gas.

China’s energy needs currently are fulfilled by the supply from maritime routes, as well as the supply of Oil & Gas from the Middle East. While any aggressive posturing by China will make sure that its supplies via the Indian Ocean are cut-off; the instability in the Middle East and Afghanistan makes the land route not that secure. In such a situation, if Russia is able to gain access to a larger chunk of the Chinese market, it could gain very important leverage over Beijing.

Europe is a model for Russian designs

The energy crisis and the uncertainty vis a vis, the supply of oil and gas to Europe had sent the whole continent in scrambles. At such a moment of vulnerability, Vladimir Putin had come to their rescue, a step that no one would have anticipated. President Putin said that Russia was ready to meet all of Europe’s natural gas demands, blaming the continent’s current energy problem on poor policies rather than a shortage of supply. In the first nine months of this year, Russia increased gas shipments to Europe by 15%, and “if we are asked to raise, even more, we are ready,” Putin stated back in October. “We increase to the extent that our partners request. There hasn’t been a single refusal, not one.”

However, as the European Union started to make some choices that went against the interests of Russia, Putin made sure that the continent felt the heat. The gas flows on the Yamal-Europe pipeline via Belarus to Poland and Germany have remained largely inconsistent. Putin is actually linking gas supplies to Germany’s decision of suspending certification for the Nord Stream 2 pipeline. The gas pipeline would make Europe totally dependent on Russian natural gas. Therefore, Putin is sending across a loud and clear message to Europe – ‘approve Nord Stream 2 gas pipeline immediately or else I will starve you for natural gas’.

In the present context, despite the overt bonhomie between Xi and Putin, historically, China and Russia have rarely agreed on anything for lengthy periods of time. Poor personal chemistry between Nikita Khrushchev and Mao Zedong, as well as disagreements over Stalin’s legacy, contributed to war along their northeastern border in the late 1960s. Because of this, a period of tense relations lasted until the Soviet Union fell apart. All of this is imprinted in the mind of Russians.

Additionally, rival spheres of influence in Central Asia, which is currently a considerably more important supply of gas for China than Russia, too are a cause of contention. For Russia, the establishment of another gas pipeline will make sure that Moscow has enough leverage over China that can be mobilized as and when the CCP tries to throw Moscow under the bus.