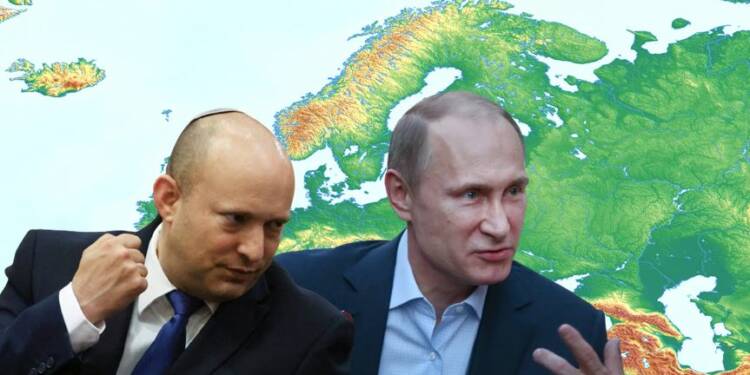 Winter is coming and Europe is already in deep trouble. Europe’s benchmark gas prices have already surged to over 100 euros, or $190 per barrel of oil. With demand for natural gas likely to surge further in winter months, the prices are likely to rise even further due to two main causes:

Interestingly, the two causes of tight gas supply to Europe have Israel and Russia written all over them.

Algeria and Morocco are at loggerheads over Western Sahara – a territory controlled by Morocco but disputed by Algeria. In fact, Algeria also backs separatist groups in the region, much to Morocco’s chagrin. Last year, Morocco normalised relations with Israel in exchange for Trump administration’s recognition of its sovereignty over Western Sahara.

Whatever the history of the region may be, Trump’s decision ensured that Western Sahara was freed from the clutches of terrorists or so-called rebels. At the same time, getting Morocco to sign an Abraham Accord was a diplomatic victory for Donald Trump and the United States of America.

Also read: An Israel-US shadow war is underway in the guise of Morocco-Algeria showdown

However, after coming to power, Biden decided to undermine Trump’s diplomatic exploits in North Africa, and started a reversal of Trump-era policies. In August, Biden tweeted a map containing the White House logo that did not take into account the December 2020 recognition of Morocco’s sovereignty over Western Sahara. The tweet was deleted later, but it had already emboldened Algeria and its militias in the disputed region.

Today, the situation is such that Biden administration and the European Union (EU) support Algeria, whereas Israel supports Morocco because of the Abraham Accord that was signed last year. Meanwhile, an emboldened Algeria and an angry Morocco are moving closer to the possibility of armed clashes.

Algeria is Africa’s biggest natural gas exporter. It has been using the GME pipeline since 1996 to deliver several billion cubic metres (bcm) of natural gas per year to Spain and Portugal. This gas pipeline however passes through Morocco.

Also read: Algeria-Morocco Crisis: The first American war in a long time which is not for oil but for food

Anyhow, it is Europe which stands to suffer. Algeria does have an alternative to the GME pipeline for supplying natural gas to Europe – the Medgaz undersea pipeline, which transports Algerian gas directly to Spanish shores. However, the Medgaz pipeline is already operating at its maximum capacity of 8 bcm per year. Even if Spain and Algeria manage to achieve their goal of augmenting Medgaz pipeline’s capacity to 10 bcm per year, it wouldn’t make up for the loss caused by the closure of the GME pipeline.

What Israel has got to do with the GME pipeline closure:

Make no mistake, the GME pipeline was important for Morocco too. The pipeline helped Morocco generate 10% of its electricity, and also helped it receive a transit fee of $50 million per year. However, if Rabat has given up all these benefits without any protest, it is quite possible that Morocco is being backed by a big power. This is where the Jewish nation of Israel comes into picture.

Recently, a Spanish intelligence document warned about the dangers posed by military rapprochement between Israel and Morocco. A military alliance with Israel can help Morocco receive some high-tech military equipment, which the African nation can use to assert control over the disputed Western Sahara territory. As such, Israel could be offering a good deal to Morroco – turn off Europe’s gas supply in exchange for some lethal weapons.

As if the closure of the GME pipeline wasn’t enough of a blow for Europe, Russia is piling further pressure on Europe’s tight natural gas supplies. Europe gets a third of its gas from Russia and runs the risk of power outages due to low supplies by Moscow.

In fact, Russia has been reluctant to shore up gas supply, which is leading to a constant upsurge in gas prices in the European continent. Moscow has not increased gas supply to Europe materially, despite assurances by President Vladimir Putin that Gazprom, a Russian majority state-owned multinational energy corporation, would supply more natural gas to Europe after filling up Russia’s storage from November 8.

The gas flows on the Yamal-Europe pipeline via Belarus to Poland and Germany have remained largely inconsistent. Putin is actually linking gas supplies to Germany’s decision of suspending certification for Nord Stream 2 pipeline. The gas pipeline would make Europe totally dependent on Russian natural gas. Therefore, Putin is sending across a loud and clear message to Europe – ‘approve Nord Stream 2 gas pipeline immediately or else I will starve you for natural gas’.

Russia and Israel therefore hold the switch to Europe’s natural gas, and they are using it to extort whatever they want out of the continent.