After France, Germany jumps in to cash in on USA’s Middle East retreat 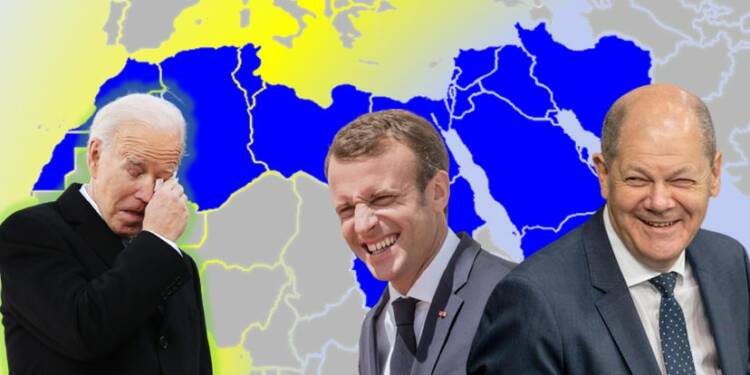 Middle East is up for grabs after the USA’s exit; that’s what at least China had envisioned. However, France and Russia have so far proven to be great impediments in China’s way to the Middle East’s throne. And like this was not enough, another great power now has also revealed its intention to enter the Middle Eastern arena. If reports are to be believed, Germany is in the works to provide the Egyptian Army with 16 IRIS-T SL medium-range air defence missile systems from the German Diehl Defence Company.

As per a Middle East Monitor report, the former German administration under Angela Merkel had shown unusual urgency in pursuing the deal. Just a day before Olaf Scholz’s assumption as the new German Chancellor, former Economy Minister Peter Altmaier had sent a letter to the President of German parliament Bundestag. In this letter, the weapon deal between Egypt and Germany was disclosed.

Also read: France, Japan, UK, and India: All of the USA’s allies are rejecting it under Biden

The letter mentioned that three MEKO A-200 EN frigates from Kiel-based ThyssenKrupp Marine System and 16 air defence systems from Diehl Defence Company will be provided to the Egyptian Army under the weapon deal. Considering Egypt’s proactive involvement in the Libyan peace process and its support to General Khalifa Haftar’s Libyan National Army (LNA) against the Turkey-backed government in Tripoli, the defence missile deal can also be seen as Germany’s indirect involvement in the Libyan conflict.

Mind the fact that Egypt is Germany’s biggest defence partner in the Middle East. As per data accessed by TFI Global, the German government signed arms deals with Middle Eastern governments worth $1.16 billion through 2020, of which weapon deals worth $752 million involved Germany’s arms exports to Egypt only. Other major defence partners were Qatar (deals worth $305.1 million), the UAE ($51 million), and Kuwait ($23.4 million).

It is no secret that Germany wants to raise its stakes in the Middle Eastern arena after the USA’s departure. The influx of several major powers including Russia, France and China has already started. Interestingly, the recent Germany-Egypt weapon deal came hot on the heels of France’s Rafale fighter jet deal with the UAE disclosed earlier this month.

In early December, the United Arab Emirates placed an order for 80 Rafale fighter jets and 12 military helicopters, strengthening economic and diplomatic ties with France through a 17 billion euro ($19.20 billion) arms purchase. It was during his recent two-day tour to the Gulf that the largest ever foreign sale of the French warplane was signed. This must have raised red flags in Germany, which also cherishes ambitions of developing its defence market in the region. So, the Merkel administration rushed through the deal with Egypt despite her impending departure.

Also read: China is eyeing the Middle East like a power-thirsty predator but France is killing Xi Jinping’s dreams

How shall the new German administration pursue the deal?

As far as the new Scholz administration is concerned, it won’t have any qualms in pursuing the weapon deal with Egypt. Olaf Scholz has shown his will to stand up to the Chinese menace, unlike his predecessor — Angela Merkel. This means that Germany will strive to strengthen its presence in the Indo-Pacific and the Middle Eastern region.

This became evident after Germany’s Navy Chief’s recent remarks. Noah Barkin, a China expert, reported on Twitter, “Germany Navy Chief Schoönbach says the next time Germany sends a warship to the Indo-Pacific he will recommend that it go through the Taiwan Strait.” As it appears, even the German defence establishment has gotten emboldened after Merkel’s exit from the helm. So, we can expect more such bold moves from the German administration as well as its military regime.

By strengthening its presence in the Indo-Pacific and Middle East, Germany wants to fulfil its two major interests. Firstly, it wants to give Paris tough competition in its pursuit of arms deals and defence partnerships in both regions. Secondly, it wants to move past the shadows of the pro-China Merkel administration and grow up as a force multiplier for the democratic world. In both of the cases, however, China remains the biggest loser.