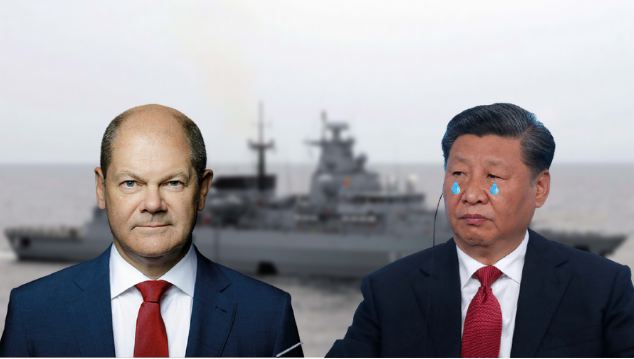 Germany has dropped another bombshell on the Chinese Communist Party (CCP). Noah Barkin, a China expert, tweeted, “Germany Navy Chief Schoönbach says the next time Germany sends a warship to the Indo-Pacific he will recommend that it go through the Taiwan Strait.” Meanwhile, the EU has also adopted an equivalence system for Taiwanese COVID-19 certificates, signifying increasing cooperation.

The effects of former German Chancellor Angela Merkel’s exit has led to a sudden turn of events. And now Germany and the EU, which is heavily influenced by Germany, have decided to dump China and embrace Taiwan.

Ever since the global economy went down during the 2008 global financial crisis, Merkel decided to alleviate the German economy by encouraging closer economic engagement with Beijing. The German industry and cat exporters found an opportunity for exponential growth in the growing Chinese market. This came to be known as Wandel durch Handel (change through trade) in German policy.

Angela Merkel was always an opportunistic leader. The woman isolated Russia for the Crimea invasion. But then in a bizarre turn of events, she ended up finalising the Nord Stream 2 gas pipeline with Russia. The pipeline makes the European Continent on Russian gas and bypassed Ukraine from the existing gas supply routes.

Anyhow, on the China front, she had a clear policy- the EU should bow down to China and antagonise Taiwan. The EU was even forced to silence criticism against China when Merkel functioned as its de facto leader and the German Foreign Ministry seemed happy to reassert the ‘One China’ policy with the same enthusiasm as the CCP.

However, Merkel’s departure is leading to some fast-moving changes in Germany’s China policy.

While the German Navy is talking about protecting Taiwan, the EU itself is warming up to the island nation at China’s expense. Filip Grzegorzewski, the EU Representative in Taiwan, himself tweeted, “Great news! EU adopts equivalence decision for #Taiwan! Covid certificates issued by Taiwan will be now equivalent to the EU Digital Covid Certificates and connected to the EU’s system. Taiwan will also accept the EU Digital Covid Certificate for EU nationals. #EUinTaiwan.”

The change in German policy is being powered by Annalena Baerbock, Germany’s new Foreign Minister. Baerbock represents The Greens, who demand that universal human rights be incorporated in any economic agreement between the EU and China, and are hell-bent on making Chinese human rights violations a central part of Berlin’s foreign policy.

In a ‘Coalition Agreement’ signed by the new German government, it has been laid out that China will be treated as a “systemic rival”. This is for the first time that Germany has referred to the red rogue nation as a systemic rival. The agreement also commits to working out a “comprehensive China strategy” as part of the joint EU-China policy, “to be able to realize our values ​​and interests in the systemic rivalry with China.”

This is a huge upgrade for the EU from the era of Merkel-Jinping camaraderie that saw the Brussels-based body kowtow to the Chinese government.

With the EU’s unprecedented embrace of Taiwan, Xi Jinping would have realised that his bully tactics and wolf-warrior diplomacy have backfired.

Xi wanted to stay aggressive and push European nations into compliance. This is why the CCP went as far as launching a trade war against Lithuania after the EU country allowed Taiwan to open a de facto embassy in its capital.

Reacting to Chinese belligerence, the EU declared that it is ready to “stand up against all types of political pressure and coercive measures” against any of its members. The EU has thus left China shocked by suddenly expanding its support for the island nation of Taiwan.

In early November, the European Parliament even sent its first-ever delegation to the island nation of Taiwan. The delegation even met with senior Taiwanese government officials and civil society organisations, in a bid to learn from Taiwan’s experiences in combating foreign interference.

Merkel’s exit has thus suddenly left Xi Jinping lone and sad. He has to fight the mighty EU alone, and he already seems to be losing the game badly.

China was stealing drones and cruise missiles from Israel, got caught red-handed