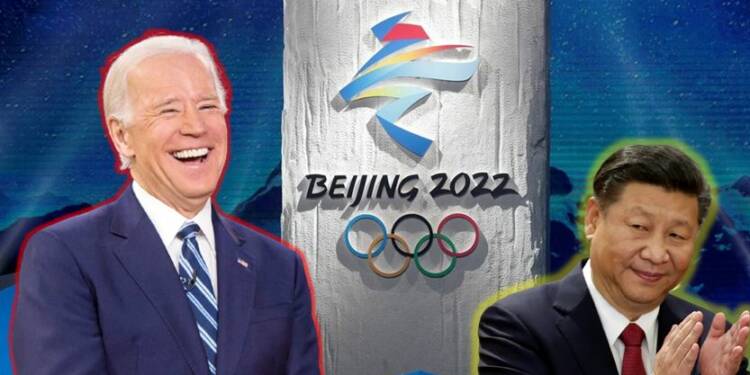 On the 6th of December in 2021, the US had announced its official boycott of the 2022 Beijing Winter Olympics. A mere two weeks later, the US has now cancelled it. The US promised to the world that “it won’t contribute to the fanfare of the Olympics” and that it cared about human rights in China. But now, it is doing the exact opposite. Yes, you heard it right, the US has now decided to send its officials to Beijing this February, and the more humiliating fact is that it is pleading with China to allow it for the same.

US to send 60 officials to Beijing

South China Morning Post reported on Tuesday that despite the boycott, the US is keen to send 18 officials to China to attend Winter Olympics. It recently provided China with a list, requesting three-month visas for all 18 representatives. The Biden administration says that they won’t be representing America, but rather would provide “security support operations”. Out of 18 names on this list, however, only one official hails from Pentagon. Rest come from the State Department only.

Also read: China’s Winter Olympics is going to be a Covid-safe event as most countries could boycott it

But that’s not where it ends. The SCMP report says that the US might submit applications for 40 more officials in the next month, taking the total number of US officials seeking to attend the Beijing Olympics close to 60. All in all, despite an official boycott, around 60 US officials will be sent to attend Olympic Games in Beijing next year. This is exactly what you call a boycott with Biden administration’s characteristics — absolutely unreliable and self-destructing. If this is what Biden calls a boycott, only God knows what sucking up is.

Reasons behind Biden’s U-turn on boycott of Olympics

But why on Earth will Biden do that? Why did he announce a boycott if didn’t want it? Let me tell you a very clear answer to this question. Biden is pretending to be what he is not. He lacks the spine to stand up to China, but he would pretend to be the biggest anti-China leader on this planet. He would flex his non-existent muscles by holding the democracy summit against China, but he won’t shy away from censoring Taiwan at the behest of the communist nation. He pretends to be a strong, bold and a smart leader, but in reality, he is weak, coward and foolish.

By announcing a diplomatic boycott, the US portrayed its commitment towards human rights. It showed that the world could trust the US to punish China for its genocide against Uyghur muslims. After trusting the US, countries like Japan, Canada, the UK and Australia had also followed the suit by announcing similar boycotts to ostracize China. All of them have been left in the lurch now.

Sucking up to China an ordinary business under Joe Biden

But this is not the first time the US under Joe Biden has backstabbed its allies, and it most likely will not be the last either! We can’t forget the way Biden humiliated Taiwan at the democracy summit earlier this month. Taiwanese minister got censored, humiliated and reproved. He got punished for speaking truth and for calling out China’s barbarism. He got snubbed for labelling Taiwan as an open country. In a summit for democracies, an authoritarian China registered a flawless victory.

The message being sent out from the US is very loud and clear — ‘trust anything but Biden and don’t listen to what the US says. You’ll be better off prostrating before China rather than opposing it’. Is this how the so-called oldest democracy of the world should behave? And this question brings us to an even more critical observation — is the 79-years-old president even well-suited to head the White House?

Except for humiliation and ridicule, what else has Joe Biden really brought to the democratic world? In its quest to placate China and not overstep its red line, the Joe Biden administration is dangerously blurring the line between strategic ambiguity and a complete surrender before Xi Jinping.

After France, Germany jumps in to cash in on USA’s Middle East retreat