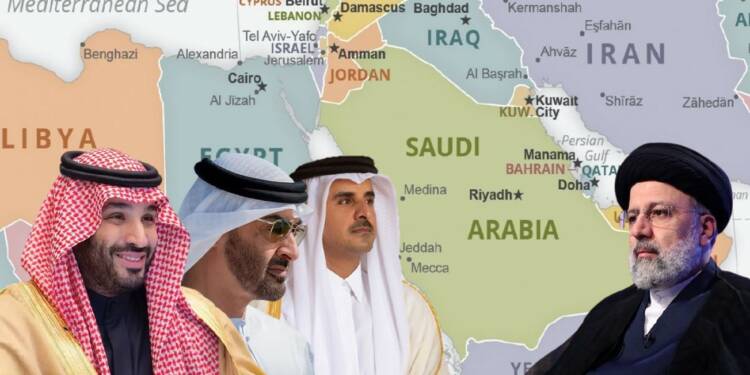 On Sunday, the Saudi-led coalition accused Iran and Hezbollah of assisting Yemen’s Houthi rebels in firing missiles and drones at Saudi Arabia, killing two people. Saudi Arabia has accused Iran of supplying the Houthis with weapons and Hezbollah of training the insurgents since the alliance entered over seven years ago to assist Yemen’s government. Tehran refutes the allegations. Hezbollah, a Shiite militant group in Lebanon backed by Iran, has consistently denied sending fighters or weapons to Yemen.

The latest Saudi charge came as the coalition ramped up its aerial bombing campaign against the Houthis, who are backed by Iran, in revenge for the kingdom’s fatal attacks. However, this is not the whole story, if one looks at the overall situation from the birds-eye view, these statements come after a United Arab Front has mobilised to make sure that Iranian proxies are no longer effective in the larger Middle East. Right from Qatar’s rapprochement with the UAE, Saudi Arabia and Israel, depletion of Iranian influence in Iraq as well as Hezbollah’s political rout in Lebanon.

Iran has been trying to capitalise on any and every rupture to increase its influence via proxies. In the process, Iranian proxies end up destabilising the region, compromising the existing political system and in the larger context keep the region away from a sustainable economic path towards common prosperity. However, with the UAE and Egypt on a diplomatic winning streak and Saudi Arabia in consonance with the actions of these countries, the heydays of Iranian proxy ops are over.

In addition to these developments, Egypt too is playing its part. Not only is the country working with Israel and Palestinian Authorities to remove Hamas from the Gaza strip, but it is also working with Lebanon and Syria to establish a pipeline to secure Lebanon’s energy needs.

In the background of all these developments, Coalition spokesman Turki al-Malki told a news conference the Houthis were “militarizing” Sanaa airport and using it as a “main center for launching ballistic missiles and drones” towards the kingdom. Malki gave reporters a video clip depicting “the headquarters of Iranian and Hezbollah experts at the airport,” where “Hezbollah is instructing the Houthis to booby-trap and operate drones,” according to Malki. Malki also revealed recordings of a Hezbollah member installing explosives in a drone and a guy he identified as a Hezbollah official instructing Houthi fighters, “We must strengthen our ranks,” according to Malki.

Also read: With its massive Turkish coup, UAE is officially leading the war on Iran

These statements and proofs are all the more significant as the Saudi-led coalition is making them from a position of power, and they know that. Saudi Arabia, UAE, and Egypt along with Israel and other regional allies are making the Arab world come together and mellowing down the differences. This is being done while simultaneously decimating Iranian proxies and their operations.