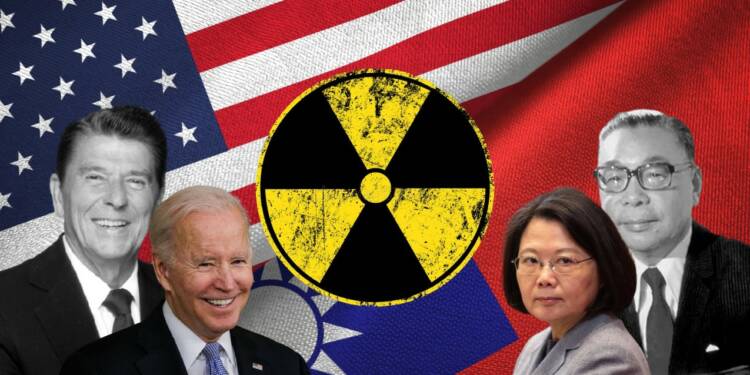 The intensity of the Chinese Communist Party’s threats towards Taiwan has seen an immense increase. With this, the possibility of a Communist invasion under the moronic leadership of Xi Jinping is also at an all-time high. In such a situation, having the Biden administration dangerously flip-flopping also adds to the problems. While Taiwan has been trying to increase its capacity to deter China from any misadventures, the power differential is too much if the US decides not to help Taiwan. The obvious question is, why did Taiwan not go for the deterrence maximiser, nuclear weapons?

The answer to this question is, Taiwan tried to develop nuclear capabilities, but every attempt was sabotaged by the USA, ironically an ally of Taiwan. Imagine a Taiwan which is capable of threatening the decimation of China’s cities in case CCP tried to take over the country by force. For Taiwan, the bomb would have evened the odds against a numerically superior foe. However, Taipei’s efforts to develop nuclear weapons, which lasted from the 1960s to the 1980s, were eventually abandoned due to consistent diplomatic pressure from its most important ally, the United States.

The People’s Republic of China tested its first nuclear device in 1964, which sparked Taiwan’s nuclear programme. Outside observers were not surprised by the test, but it was nevertheless Taiwan’s worst nightmare come true. The 60s were a period of infrequent skirmishes between Chinese and Taiwanese air and naval forces and the threat of these skirmishes devolving into all-out war were also really high. Suddenly, Taipei was faced with the danger that war may escalate into a nuclear conflict.

A nuclear arsenal, in Taiwan’s opinion, would be the ultimate guarantee of national sovereignty. Even if the US broke up with Taiwan in favour of CCP, which it eventually did, Taiwanese nukes would hold the Chinese People’s Liberation Army at bay. These weapons would have acted as a deterrent not only against CCP’s weapons of mass destruction but also against conventional troops. In retrospect, this would have been a successful venture, because North Korea’s own nuclear weapons procurement has made the US and South Korea wary of retaliating against the country’s various military provocations.

The Taiwanese bomb programme began in 1967, with the Institute for Nuclear Energy Research at the Chung-Shan Institute of Science and Technology serving as a front. In 1969, Canada sold Taiwan a heavy-water nuclear research reactor as a forerunner to what it thought would be commercial energy-producing reactor sales—and it couldn’t have come at a better time, given the Trudeau Sr. government’s recognition of the People’s Republic of China in 1970. When the Taiwan Research Reactor reached criticality in 1973, Taiwan began assembling a weapons-grade plutonium stockpile.

The US State Department demanded that Taiwan’s research programme be changed to be more in line with peaceful research rather than nuclear weapons research but stopped short of mandating that Taiwan cease all nuclear research and development. In 1978, the US discovered yet another covert programme, this time a secret uranium-reprocessing programme, and compelled Taiwan to cease operations.

Taiwan’s nuclear-weapons programme fell into hibernation after being caught numerous times in the act. The programme was restarted in the mid-1980s, and INER was discovered developing a uranium-reprocessing facility in violation of Taiwan’s 1970s obligations. Col. Chang Hsien-yi, the deputy director of INER and a longstanding CIA asset, defected to the US in December 1987, bringing proof of Taiwan’s nuclear programme with him. The previously classified information was utilised to confront the Taiwanese government, which finally terminated its nuclear programme in 1988. Taiwan was believed to be one or two years away from a nuclear weapon at the time of Colonel Chang’s defection.

Also read: Ukraine vs Taiwan: Why is Biden ignoring China, but provoking Putin?

A tactical nuke could be used to hit mainland ports, airfields, and command centres if China invaded Taiwan. While this wouldn’t be much help on the invading beachheads at first, it may put a stop to the logistics backing such an invasion. All in all, considering how North Korea has been successful in deterring the US and South Korea with help of nuclear capabilities, the nuclear capabilities would have kept China in check. However, how can the USA allow its ally to have capabilities that will decrease its dependence on the US support and alliance? While there can be multiple observations and interpretations, one thing is obvious and that is, the USA’s sabotage of Taiwan’s nuclear programme was not an ally like behaviour.