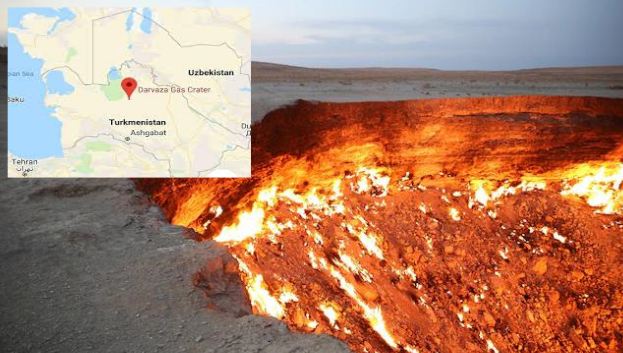 Covering roughly 70% of Turkmenistan is the Karakum Desert, a massive expanse of sun-scorched dunes. This parched 350,000sq km area has endless crests and valleys of the Karakum’s barren wilderness. However, in the desert’s north-central plain, one may stumble upon a truly surreal sight of the Darvaza Crater. It is a molten gas pit that has been spewing fire for decades and is known as “The Gates of Hell”.

After setting out on the first trip to explore the crater’s depths in 2013, Canadian explorer George Kourounis revealed that no one knows how this hellish inferno came to be. The gaping 69m-wide by-30m-deep crater, according to local Turkmen geologists, emerged in the 1960s and wasn’t engulfed in flames until the 1980s. However, because gas and oil were coveted commodities in Turkmenistan during the Soviet era, any record of the crater’s origin appears to be classified and top-secret information. So, the question remains, how did this so-called man-made gateway to hell come into being?

The gas crater is located near Darvaza, also known as Derweze, a settlement. It is located in the Karakum Desert, some 260 kilometres (160 miles) north of Ashgabat, Turkmenistan’s capital. One of the world’s largest gas reserves can be discovered here. Locals gave the field the moniker “Door to Hell” because of the fire, boiling mud, and orange flames in the enormous crater, which has a diameter of 70 metres (230 ft). The hot patches cover a 60-meter (200-foot) wide area and reach a depth of roughly 20 metres (66 ft).

Also read: How Putin wrested back Central Asia from the US and turned it into Russia’s backyard

The history of the crater’s early years is unknown: local geologists believe the collapse into a crater occurred in the 1960s, and the gases were not set on fire until the 1980s. However, neither the Soviet nor Turkmen versions of events have been documented. Gurbanguly Berdimuhamedow, the President of Turkmenistan visited the site in April 2010 and ordered that the hole be covered. He designated a wildlife reserve in the Karakum Desert including the crater in 2013. He emerged on state television in 2019 doing doughnuts around the crater to debunk and refute rumours that he had died.

According to Turkmen geologist Anatoly Bushmakin, Soviet engineers discovered the location in 1971. It was supposed to be a large oil field location at first. The engineers set up a drilling rig and operations to determine the amount of oil that was available at the location. The ground beneath the drilling rig and camp fell producing a broad crater shortly after the preliminary survey discovered a natural gas pocket, burying the rig with no deaths.

Also read: Central Asia is sitting on a treasure trove that will decide the world’s future

Engineers decided to burn the gas off because they expected dangerous leaks of harmful gases from the cavern into adjacent communities. It was estimated that the gas would burn out within a few weeks, but it has instead continued to burn for 50 years and is expected to keep on burning.