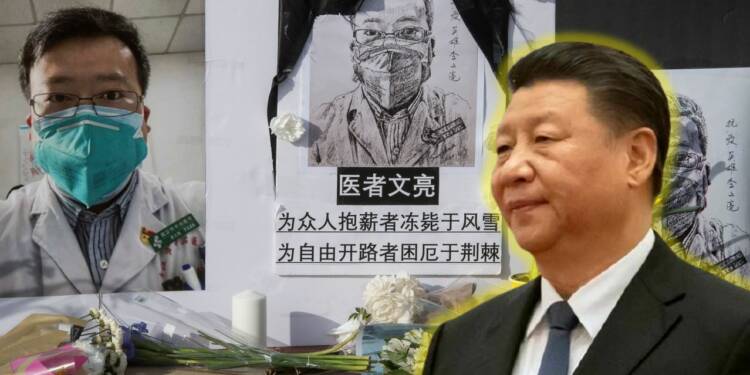 Dr. Li Wenliang was the first whistleblower who was hounded for exposing the Chinese Communist Party’s (CCP) coverup of the Coronavirus outbreak in China’s Wuhan. Li, an ophthalmologist at a hospital in Wuhan where the Sars-CoV-2 virus outbreak was first detected, saw a medical report showing potential SARS coronavirus cases that were confirmed in the city. He reproduced this information on his Weibo account. In January 2020, Dr. Li Wenliang was arrested by the police.

In fact, the communist authorities accused coronavirus whistleblowers of rumour-mongering. Dr. Li later died of coronavirus itself, but under questionable circumstances, with many believing that his death, which came a month after he blew the whistle on the CCP, was actually a cold-blooded murder.

Hated by the CCP, loved by the people

The Chinese Communist Party – which hounded Dr. Li Wenliang for spreading awareness regarding the virus, has been forced to hide in unknown corners today. The CCP sought to create a villain out of Dr. Wenliang. However, the people of China consider the deceased whistleblower a hero.

Also read: Natural Immunity to COVID 19: How Wuhan virus associates with Natural immunity of a person

Thousands of people left messages on the social media account of Li Wenliang on the anniversary of the day he learned of possible pneumonia-causing virus cases in Wuhan and shared the information with fellow doctors.

According to Reuters, a user wrote, “Happy new year Dr. Li, we will remember you forever.” Others posted candle emojis, brief messages of thanks and exclamations of how two years have gone by so quickly, in the comments section of one of Li’s posts on Weibo. In fact, people consider Dr. Wenliang family. They engaged in a conversational talk with him – as seen from posts on his Weibo account.

Fang Kecheng from the Chinese University of Hong Kong made an interesting observation. According to him, the public’s outpouring of love for Dr. Wenliang was, in fact, a mark of protest against the CCP. He said that Weibo has become an online place where people express their feelings which are not comfortable expressing elsewhere. “Such places for anonymous expression are needed in any society, and this is especially true in today’s China.”

The Chinese Communist Party knows it has antagonised a significant population of China, which considers Dr. Li Wenliang a ‘martyr’ and a victim of the Chinese state’s oppression. So, Xi Jinping is now trying to rectify his image. Global Times – the CCP’s foremost mouthpiece, is now trying to appropriate Dr. Li Wenliang and his legacy, while completely ignoring the fact that it was Xi Jinping and his police that went on a mad hunt-down of the now deceased doctor.

“The warm and touching words left on Dr Li’s Sina Weibo account were a sharp contrast to the malicious attacks launched by western media, under the name of Li, to attack China’s initial handling of COVID-19.

Observers noted that such a sensationalizing of Li’s death and the reaction of the Chinese public to it actually mirrors the ignorance of Western media about the Chinese people’s solidarity and contributions against COVID-19, and using Li’s death to sow discord between the Chinese people and the government has been doomed long ago.”

Also read: China mobilizes fake protesters in the US to spin “US origin” theory after Biden’s botched up Covid investigation

This defeats all sanity. The CCP is trying to appropriate a victim of its brutality, and trying to convince the world that support for Li Wenliang is actually support for the Chinese regime! The CCP is criminally delusional on this count. The Chinese public considers Dr. Wenliang a symbol of resistance against the CCP. Dr. Li is an inspiration for the Chinese public. Li’s legacy is that of exposing the CCP, and yet, the CCP wants you to believe that the Chinese public thinks none of this for Dr. Li, and that such facts are actually ‘theories’ concocted by the west.

To be very clear, China neither informed the world of the disaster coming their way nor did it allow whistleblowers to speak up. As a result, over 5.4 million people have already died across the world and all this blood is on China’s hands.