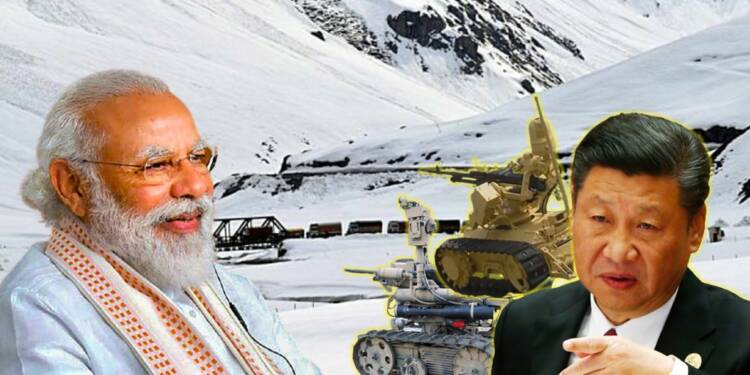 Xi Jinping has given up on his ego wars against India, on the Eastern Ladakh front. China is now replacing its People’s Liberation Army (PLA) soldiers with defective machines in an apparent admission of its failures. China’s abrupt decision shows three things:

As Chinese PLA troops fail to match up to the battle-hardened Indian Army soldiers in the Eastern Ladakh sector, media reports allege that Beijing is sending robots armed with machine guns to the frontier to handle growing tensions.

Dozens of autonomous Chinese vehicles capable of transporting arms and soldiers are being reportedly dispatched to Tibet. Most of these vehicles are being sent to border regions where India and China are engaged in a tense military standoff.

Around 120 to 200 MUL-200 unmanned vehicles, which can be used for transporting supplies and are also capable of being equipped with weapons, have been dispatched to Tibet. Some other military vehicles used for carrying troops and armament systems too are complementing the unmanned platforms.

It has been almost two years into the Easteen Ladakh standoff, and China is suddenly changing its strategy. But why?

Also read: Winter has come for China. And it will badly regret its misadventures at the border now

The ineptness of the Chinese PLA soldiers was on display, when they got thrashed at the hands of Indian troops in Galwan Valley of the Eastern Ladakh sector. Again, Chinese soldiers keep going down during the harsh winter months in Eastern Ladakh. In the past, PLA troops were evacuated on stretchers due to health complications linked to high altitude.

Even otherwise, the Chinese PLA is an incompetent military force. It is composed of what we at TFI describe as wimps, sissies and little emperors.

Close to 70% of the Chinese military force is comprised of single-children, with no siblings. As such, they have been brought up as pampered “little emperors” by parents and grandparents. Having psychological impacts that growing up alone might have, there is a constant fear among strategic quarters in China that the softness of their force would spell a death-knell for the country’s expansionist and belligerent ambitions around all of its borders.

In order to deal with their own mess, the PLA has been forced to resort to special training, in order to straighten up “spoiled” soldiers. But it’s simply not happening, which is one reason why Xi Jinping might have thought of pulling back the incompetent PLA soldiers from Eastern Ladakh and deploying faulty machines instead.

Most of the PLA soldiers come from Eastern China. Like all other Chinese-State institutions, the PLA too institutionalises Han Chinese domination.

Also read: India is ensuring that the Chinese PLA has a tough winter at the LAC

The Han Chinese community is predominantly based in the fertile plains of Eastern China. However, China is running a genocide of ethnic communities and trying to relocate Han Chinese population into provinces like Inner Mongolia, Tibet and Xinjiang in a huge democratic shift.

Anyway, from the point of view of the current military standoff, China’s problem is that the Han Chinese majority in the PLA is not acclimatized with the high-altitude and biting cold conditions in Eastern Ladakh. So, the PLA started planning conscription of Tibetan soldiers since February last year.

“These new recruitment drives are being held at a time when there are reports that mainstream Chinese troops from lower altitudes faced problems during their deployment in Tibet. We have intercepts showing their troops suffered from health problems such as severe mountain sickness and high altitude pulmonary oedema,” said an official, as per a report by Hindustan Times.

The CCP has resorted to forcing Tibetan children as young as eight years old into indoctrination camps, where they are ‘Sinicized’ to the core.

But again, it seems that the plan hasn’t worked. Tibetans are not ready to fight for the PLA and this is why Xi Jinping had to look for machines.

So, it isn’t quite believable that China will be able to build properly-functioning machine gun-wielding robots and unmanned armed vehicles to fight Indian troops in Eastern Ladakh.

Also read: Be it on land, air or water, military might of China is a complete sham with zero warranty period of assets

In any case, China doesn’t have much experience and expertise in Artifical Intelligence (AI) which powers unmanned military platforms. Therefore, China is deploying a very limited number of such assets in Eastern Ladakh. This piecemeal deployment of unmanned platforms is therefore a desperate measure by Beijing and not really a show of strength.