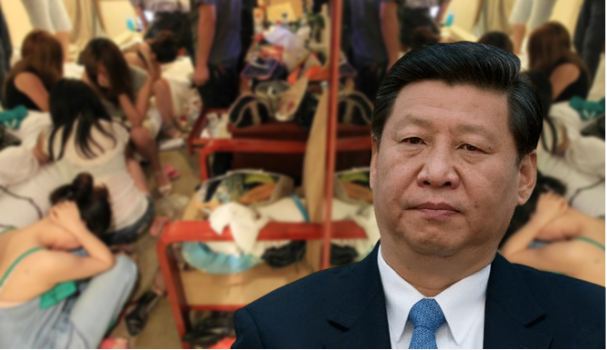 You’ve all heard about China’s debt-trap diplomacy, right? Now, how would you react to news of China running a debt-trap prostitution racket? There’s nothing to be surprised about here. China has become a rogue, mindless and cruel nation.

In line with the same, China is living up to its name of being a neo-colonial country that will go to any extent to see its geopolitical ambitions fulfilled. That includes selling women from other countries in their own countries. That’s right. China runs a sex racket in Laos, and sells Lao women as prostitutes inside the Special Economic Zone it has developed in the Mekong basin nation.

Inside China-run Golden Triangle Economic Zone next to the Mekong River in far northern Laos, hundreds of young women from neighbouring countries come to look for jobs. They are hired by Chinese employers. For some time, they are made to sell shares to casino patrons.

But then, they are debt-trapped. These women suddenly find themselves under a mountain of debt. It is here that China swoops in.

According to a report by Radio Free Asia, these “chat girls” are lured in with attractive offers, a decent salary, free food and accommodation in the Chinese Special Economic Zone. Once they step foot in the Golden Triangle SEZ – operated entirely by China, they are at the mercy of the CCP and its stooges. These chat girls are told to sell shares in the companies to casino patrons, but many struggles to reach the unrealistically high sales goals and end up exchanging sex to repay their application costs and moving expenses.

As most of them are only able to attract one or two investors per month and fail to meet expectations, they are sold to other companies by their employers and forced to have sex. The women are told to persuade up to 100 people every month to buy the company stock – which is frankly, an unprecedented quota.

Therefore, Laos has transformed into a perfect Chinese client state. Laos is practically powerless in the Golden Triangle Special Economic Zone of China. Inside the SEZ, China’s currency, language and time zone are used and ordinary Lao citizens are kept out. It’s practically Chinese territory within Laos.

Those who can work as sex slaves, meanwhile, are transported in and out using trucks.

According to RFA, many women in the debt trap have attempted to reach out to Lao authorities for help, but their jurisdiction over the SEZ in Bokeo, the country’s smallest province, is limited. Even the provincial anti-human trafficking department cannot freely enter the SEZ. A Lao official told the publication, “The Golden Triangle SEZ is under Chinese control. We can’t get in there.”

China has been making massive infrastructure for Laos. Yes, it isn’t doing so for free. With every Chinese brick laid in Laos, the country’s debt to China mounts. According to the World Bank, Laos’ $19.14 billion GDP accumulated an extra $13.3 billion in debt last year. Fitch Ratings cautioned in August that the country will confront severe debt payment commitments of $1.16 billion per year from 2022 to 2025, half of which it would be owing to China. The country’s foreign reserves were $1.2 billion in May 2021, compared to $1.32 billion at the end of 2020.

China relentlessly building highways and railways in Laos, and connecting these to its mainland is simply a means of Beijing colonising the Southeast Asian country.

The people of Laos in the recent past have been force-fed Chinese culture. But they have been resisting. With news of China using young women as sex workers, the people of Laos might just rise against the Communist nation and kick it out of their country for good.