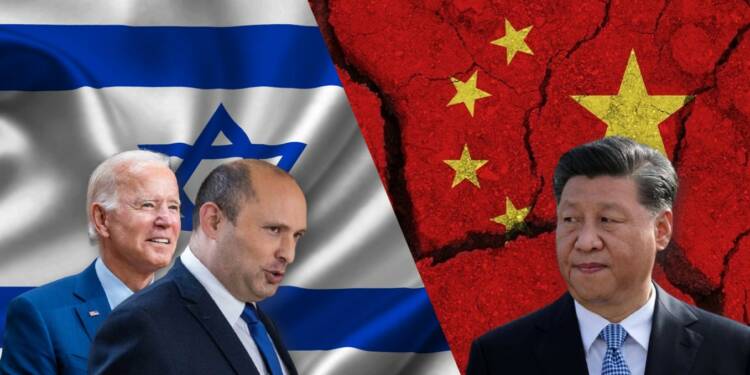 The grand Middle Eastern decouple is here. Make no mistake, we at TFIGlobal, have been waiting for this dissociation for a long time now. Whenever we say decouple, you should instinctively think China. What is happening is that China is being kicked out of the Middle East, and taking the lead of this noble initiative is the brave Jewish nation of Israel. Tel Aviv has set in motion what we like to call the ‘Great Grand China Decouple’. Of course, to the surprise of many, Israel has been nudged to do so by the Biden administration – in what suggests Joe Biden finally might be getting his head together regarding China.

According to a report by Axios, the Biden administration and the Israeli government held low-profile consultations last month on China. The meeting on December 14, led by deputy national security advisers from both sides, was the first wide-ranging consultation between the two countries on China since Biden took office.

A senior Israeli official said both sides presented general policy lines and exchanged notes as they conduct their respective policy reviews, adding, however, that no decisions were reached. After these consultations, though, Israel is known to have assured the United States that it will notify Washington about significant deals it strikes with China and said it would re-examine these deals if the opposition is raised.

Israel has also reportedly asked the U.S. about alternatives to Chinese companies in the infrastructure sector. According to Haaretz, a similar request was made to the UK, and Israel hopes to advance mutual initiatives in the infrastructure sector with India and the United Arab Emirates as well. This is a prudent step to take, as decoupling from China would require Israel to have strong partners which would be willing to fill in the gaps immediately.

China has invested heavily in the Israeli economy. The most important of all Chinese investments is, of course, the Haifa port, which is seen as an important milestone in China’s BRI project. The port is slated to fall in the hands of SIPG, a Chinese government company, on a 25-year lease.

But Haifa port is not the only Chinese investment in Israel that now stands threatened because of a possible rift between the two countries. Chinese companies are also building an Israeli port in Ashdod and a light railways project running through the greater Tel Aviv area. The rail project is sensitive as it will pass in great geographical proximity to the Israeli military headquarters.

Moreover, Hong Kong conglomerate CK Hutchison is also building a $1.5 billion water desalination plant in the Jewish nation. China has also been investing extensively in Israeli technology and businesses. As per IVC Data and Insights, it invested $400 million in Israeli start-ups in 2018 and $243 million in 2019.

The Israeli state attorney office connected to the finance department has said that ten Israeli suspects, including three companies, committed security violations to sell missiles to China. These companies and individuals have been found guilty of illegally exporting cruise missiles to the communist nation.

Interestingly, Israel gave China plenty of time to mend its ways. However, with the Israel-Gaza war earlier this year, let’s just say all such hopes were dashed. China engaged in blatant anti-Israel propaganda and sided with Hamas. It also acted against Israel at the United Nations.

Israel had been ducking the wider Sino-American conflict for long. But then, China’s nefarious moves have made Tel Aviv pick a side, and it is not China’s. Now, China is all set to get kicked out of Israel, after which the Communist nation will find its limited fortunes across the Middle East collapsing like its real estate sector.