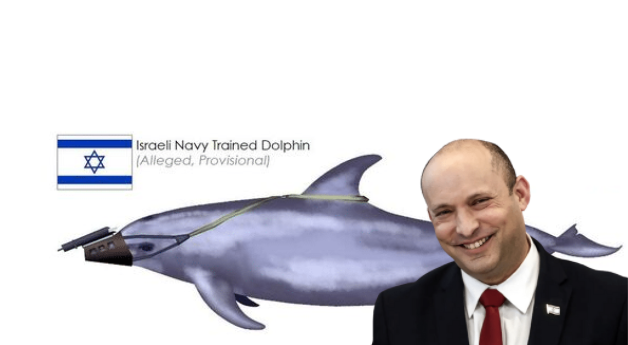 Hamas is scared. Hamas is petrified. The violent Palestinian extremist organisation does not know what to do. With one swift move, Israel has widened the already gigantic power asymmetry with Hamas. Now, the Gaza-based terror organisation has been turned into a headless chicken, which does not know what to do, how to fight or how to even survive. After all, Israel has unleashed a lethal weapon against Hamas. Any guesses for what this weapon could be? Is it a new missile, an artillery firing monster of a machine, an aircraft or an armed drone? Let me break it to you.

Israel has unleashed its “killer Zionist dolphins” on Hamas. That’s right. Dolphins. At least that’s what Hamas wants us to believe.

This is not a joke. Hamas claims it is being hunted down by Israeli dolphins. On Monday, the Palestinian extremist organisation claimed that Israeli security forces used a dolphin to chase Hamas’ frogman commandos off the coast of the Gaza Strip.

According to Hamas, during an operation that occurred at an unstated time, Hamas naval operatives were chased into the sea by a dolphin equipped with a device capable of killing the terrorist group’s frogmen.

Killer Zionist dolphins exist, according to a Hamas publication. Abu Hamza explains that a member of Hamas' Frogman unit who was killed by Israel during the May conflict found the killer dolphin. The device the alleged killer dolphin was wearing is shown in the publication. pic.twitter.com/gvAyynO3YT

Joe Truzman, a research analyst at the Foundation for Defence of Democracies’ Long War Journal, tweeted, “Killer Zionist dolphins exist, according to a Hamas publication. Abu Hamza explains that a member of Hamas’ Frogman unit who was killed by Israel during the May conflict found the killer dolphin. The device the alleged killer dolphin was wearing is shown in the publication.”

According to sources quoted by the Al-Quds publication, Hamas had succeeded in capturing the 2015 “Israeli dolphin operative”. It is not known whether the dolphin commando is alive, or has been killed by Hamas. According to BBC, the pro-Hamas newspaper claimed that the marine mammal was “stripped of its will” and turned into “a murderer” by Israeli forces.

Israel has in the past been accused of using other weaponized animals for militarized purposes. In 2010, Egypt’s South Sinai Gov. Mohamed Abdel Fadil Shousha suggested that deadly shark attacks in Sharm el-Sheikh were part of a Mossad operation to harm Egyptian tourism. It is not alone in doing so. The United States and Russia have both been accused of weaponizing marine life. Iran, meanwhile, is also accused of using dolphins for military purposes.

So, if news of Israeli dolphins taking down a Hamas militant is indeed true, it would mean that Tel Aviv is using Iran’s tactics against its proxy group in Gaza – and that would be tremendously poetic. Hamas needs to be careful now. Its militants need to constantly watch over their backs. They need to stop venturing into waters. They need to be afraid of shadows too. Israel seems to have decided to put an end to the Hamas nuisance for once and for all.

If Israel begins weaponizing nature against Hamas, making Gaza a whole hostile territory for the violent extremist group, the grand Iranian pet project of eviscerating Israel will be reduced to ashes.