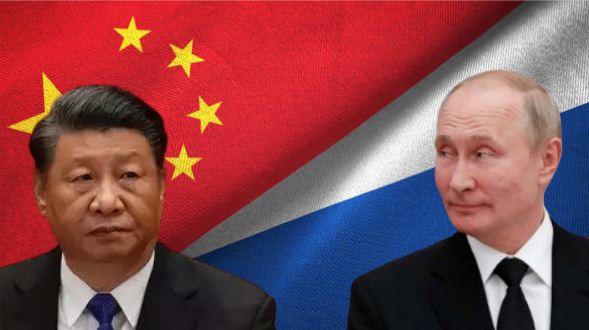 Tensions are fast rising in Eastern Europe and Ukraine. Russia has mobilised close to 100,000 troops and military hardware near the border with Ukraine, while the United States, along with its NATO allies, believes that an imminent invasion is on its way. Russia has put forward a list of demands to NATO – which the U.S.-led coalition has not agreed to. So, to up the ante against Washington and Europe, Russia has now decided to tell its rivals that its troops can land in Cuba and Venezuela at any time. This is a major escalation by Moscow in terms of rhetoric.

But guess who has ended up emerging as the biggest casualty of Russia’s latest declaration? Take a guess. It is a moronic man who leads a massive Communist state. That’s right, Xi Jinping, aka Winnie the Pooh, is the one man who has gotten a severe heartburn with Russia’s declaration of stationing troops in Cuba and Venezuela at will.

Russia has refused to rule out a military deployment to Cuba and Venezuela if talks with the West on European security and Ukraine fail to go their way. Sergei Ryabkov, who led Russia’s delegation in a meeting with the U.S. on Monday, told Russian television he could neither confirm nor exclude sending military assets to Cuba and Venezuela if talks fail. Asked about these steps, he said “it all depends on the actions by our US counterparts”.

There’s no doubt that such an open declaration by Russia has several security implications for the United States, but of greater concern to the US is President Vladimir Putin’s assault on China. It must be mentioned that it was only last month (December 2021) that Cuba joined Xi Jinping’s flagship Belt and Road Initiative (BRI).

On December 26, CCP mouthpiece Global Times published a piece discussing the ways in which China and Cuba will work together on projects such as infrastructure, technology, culture, education, tourism, energy, communications and biotechnology,” which “are in line with Cuba’s development plans for the short and long term.”

Now, don’t we all know what the BRI will do to Cuba? It will turn the already Communist-infested country into a full-blown Chinese client state. Why else would China “work together” with Cuba on the ‘cultural’ front, as claimed by Global Times?

Russia has taken the hint. Cuba and Venezuela are both countries that have long been influenced by Moscow, and Putin is not going to let that influence evaporate, much less because of China’s debt-trap diplomacy.

Remember how Cuba, once upon a time, allowed Soviet missiles to be housed in its territory – giving Washington a rather vivid episode of wet pants? That’s how close Cuba and Russia are.

China has occupied Cuba’s internet. It runs a monopoly over the Cuban digital space. Remember the anti-regime protests that rocked Cuba last year? Guess who helped the Cuban regime suppress them? It was none other than China. Chinese state-owned internet giants operating in the country sprang into action and rushed to censor anti-government voices.

There’s more to the story. The Cuban Revolutionary Armed Forces (CRAF) were being steadfastly trained by Chinese trainers, particularly for quelling mass riots. Reports suggest that Cuban police may have learnt some tactics from their Chinese counterparts, especially from the People’s Armed Police (PAP) that specializes in suppressing the domestic uprisings in China.

China has dominated Cuba’s recent infrastructural projects since the country decided to revamp its ageing railway system. In a friendly move in October 2020, China and Cuba even signed an agreement to extend Chinese language learning among the island’s secondary school students as an optional foreign language. Cuba is often referred to as China’s socialist brother by Chinese state media.

Venezuela’s dictator, Nicolás Maduro is a Chinese stooge. Throughout the pandemic, China has continued to provide the Maduro regime with economic and political support. It continues to recognize the legitimacy of his regime, and in October 2019, even helped Venezuela win a seat on the United Nations Human Rights Council.

With roughly $67 billion invested since 2007, China has become a major source of Venezuela’s external financing, and an important partner of its oil-based economy. According to Reuters, in 2019, China replaced the United States as the top importer of oil from Venezuela. In 2018, Nicolás Maduro travelled to the PRC to sign twenty-eight bilateral agreements with China and expressed public support for China’s Belt and Road Initiative.

Additionally, China has provided the Maduro regime with technological assistance for surveillance and social control through the ‘homeland card’. The homeland card, inspired by China’s national identity card program, is used by the Venezuelan regime to provide food and medicine to citizens, as well as to track voting and social media use.

Given how China has been trying to replace Russia in these Communist nations, it is only fitting for Putin to send Russian troops to these nations to kick China out for good. Rest assured, with Russian troops in place, China will not be able to carry out whatever nefarious plans it has in mind for these Latin American countries. Putin has once again shown Xi Jinping how he is no match for the former KGB spy.