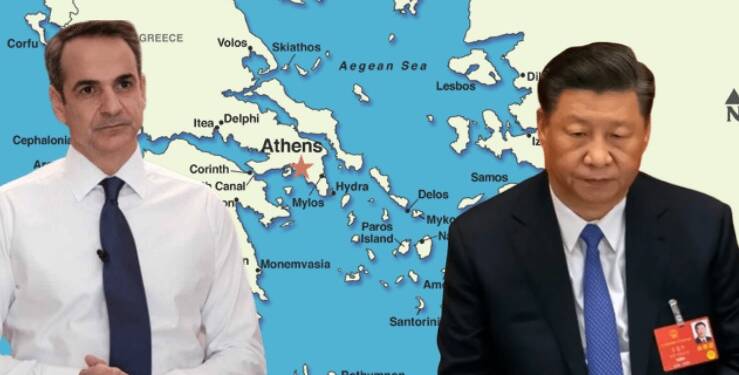 Which is the most prized Chinese BRI possession? Is it the Gwadar port in Balochistan or the Hambantota port in Sri Lanka or its many investments in Africa? Well, no it is the Piraeus port in Greece– the famous ‘gateway to Europe’.

Read more: Greece may be all set to kick China out of its prized Piraeus port

In fact, Greece is one of the most important locations on the map of China’s overseas investments. Beijing even made a conscious effort to colonise Greece, but Greece is fighting back now. Let’s explore the story of Chinese influence in Greece and Greece’s big fight to free itself from Beijing’s clutches.

The story of the Sino-Greek relationship started just before the 2008 global financial crisis. In 2006, the two countries became “strategic partners”. The euphoria generated by successive Olympic Games in Athens (2004) and Beijing (2008) helped China in creating a closer relationship with the Southeast European nation.

China was interested in establishing a foothold in Greece because the country was central to the maritime Silk Road. The country is well connected to the Near East, South Europe and North Africa. So, expanding its presence in Greece could help China in furthering its trade interests.

And as fate would have it, the global financial crisis broke out in 2008. Western economies were facing a major downturn at the time. So, the centre-right Konstantinos A. Karamanlis government in Greece needed some help. China jumped in with its investments and targeted the Piraeus port the same year.

The Piraeus port is the fourth-largest container port in Europe and also the Continent’s largest passenger port. It really serves as a gateway into Europe and therefore Chinese state-owned shipping giant China Overseas Shipping Group Co. (COSCO) obtained a 30-year concession to manage two terminals of the Piraeus port in 2008 itself for about $570 million.

In 2013, COSCO won another five-year contract and the right to build a third terminal. Meanwhile, COSCO pumped in another $263 million to renovate the existing terminals, effectively making Piraeus the point of China’s entry into Europe.

Chinese influence in Greece went beyond the Piraeus port. It invested in other strategic sectors also, like the acquisition of a 24 percent stake in Independent Power Transmission Operator (IPTO) by China State Grid International Development.

Meanwhile, the behaviour of the Brussels-based EU didn’t help matters either. In 2015, there was a change of guard in Europe with the radical leftist party Syriza coming to power under the leadership of Alexis Tsipras.

Tsipras took over as the Greek PM with a clear goal- ending austerity measures by the EU and halting privatization. This also raised a question mark upon the Chinese role in Piraeus port. Chinese officials panicked and established contact with Tsipras to avoid any modification in the Piraeus port and other Chinese investments.

China could have fallen out of favour in Greece in 2015, but it did not. European financial institutions and the EU that was led by former German Chancellor Angela Merkel started bullying Greece.

Athens faced a government debt crisis in 2015 and desperately wanted a rescue option. The EU however started to harass Greece. It tried imposing a reforms agenda on the country that wouldn’t go in line with the radical leftist government that had come to power and also made it clear that Athens won’t get money immediately but would have to remain hostage to the European Central Bank (E.C.B.).

So, Tsipras was left with just one option- China.

Despite his early inhibitions, Tsipras government announced an “upgrading of relations between Greece and China” soon after coming to power in 2015. At a ceremony, Tsipras even declared Greece’s intent to “serve as China’s gateway into Europe.”

Costas Douzinas, an influential member of the governing Syriza party, even said, “While the Europeans are acting towards Greece like medieval leeches, the Chinese keep bringing money.”

And then came the biggest blow- COSCO took over 67 percent of Piraeus Port Authority and also got a forty-year concession. The prized Greek port was now majority-owned by a Chinese State-owned enterprise and the next thing we know, most Chinese companies started using the port for trade activity.

In May 2017, Tsipras even attended Beijing’s BRI summit making it clear that Athens was falling into Beijing’s lap.

What China was doing in Greece amounted to sheer neocolonialism. Things however started changing in Greece in 2019 when the left government was replaced by the centre-right New Democracy party.

New Democracy has been traditionally pro-US. The incumbent government under Kyriakos Mitsotakis is no different.

Moreover, the Trump administration too started nudging the Kyriakos Mitsotakis government to fight China. During his visit to Athens in 2019, then US Secretary of State Mike Pompeo inked a defence pact with Greece. He also said, “Take China…which is using economic means to coerce countries into lopsided deals that benefit Beijing and leave its clients mired in debt.”

The US started warning Greece about China right from the word go. Greece hasn’t turned hawkish on China yet. But it has at least realised the need to draw a safe distance. Greek Prime Minister Kyriakos Mitsotakis said, “We want to have good relations with China, but they are also strategic competitors.”

Piraeus port could slip out of China’s hands

However, local businesses haven’t gained anything. Most of the equipment and materials used in COSCO-led construction at terminals 2 and 3 were brought in from China and Greek businesses were marginalised.

There was a time when China was virtually taking over Greece. But it has changed drastically now. Gradually, Greece is turning anti-China and this has started its fight for liberation against Beijing.