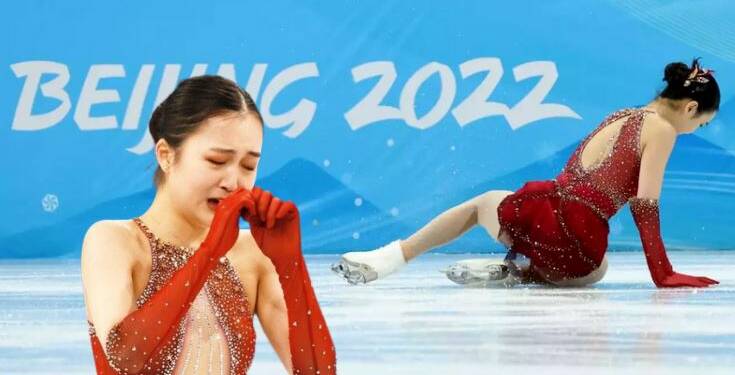 If you are a Chinese athlete, you have no choice but to win. Losing is not an option for you. If you lose, you are not patriotic and devoted enough to China. If you lose, you will be hounded, abused, attacked and declared an outcast by Chinese nationalists – all of whom function at the behest and explicit orders of the Chinese Communist Party. Essentially, if you lose, you are going to make a very powerful enemy. Now, do you want the CCP as an enemy? No? Then you must win every match, or simply perish.

The stakes were always high for 19-year-old figure skater Zhu Yi. Making her Olympic debut for Team China, Zhu Yi fell flat on the ice and finished last in the women’s short program team event on Sunday. Zhu was the first to compete on the second day of the figure skating team event. However, she soon tumbled and crashed into the wall after a failed jump in the opening combination, and missed another jump later in the program, finishing with the lowest score of the event.

It was because of Zhu Yi’s performance that China consequently fell from third place to the fifth in the standings. She broke down immediately, because she knew what awaited her once she stepped foot out of the stadium. After the event, Zhu said, “I’m upset and a little embarrassed. I guess I felt a lot of pressure because I know everybody in China was pretty surprised with the selection for ladies’ singles and I just really wanted to show them what I was able to do but unfortunately I didn’t.”

The athlete’s fall did not go well in China. On Weibo, the hashtag “Zhu Yi has fallen” gained 200 million views in just a few hours. Chinse nationalists also raised questions as to why Zhu, an American-born skater, was picked to represent China at the expense of an athlete born in the country. Zhu was born in Los Angeles to a Chinese immigrant family, but decided to compete for China in 2018 and gave up her American citizenship. She also changed her name from Beverly Zhu to Zhu Yi.

Some of the comments against Zhu Yi read:

“Please let her learn Chinese first, before she talks about patriotism.”

“This is such a disgrace.”

“Zhu Yi, how ridiculous your performance is! How dare you skate for China? You cannot even hold a candle to an amateur!”

Earlier, during the 2020 Tokyo Olympics, despite winning silver medals for their country, Chinese athletes were seen apologizing to their government and people for losing out on Gold to their opponents. They faced the wrath of Chinese social media users, and almost all were reduced to tears. Wang Luyao, who had failed to qualify for the 10m air rifle shooting match said, “Sorry everyone, it’s such a pity, I admit I chickened out. See you in three years’ time.”

“How dare you post a selfie after losing the game?”, one Chinese user asked her.

Frankly, the people of China need an outlet, and they need it desperately. There is just so much pent-up frustration against the CCP, that it keeps manifesting itself in the form of undeserving and innocent people being made victims to online abuse and hatred. Chinese athletes in particular become subjects of such anger. It is also possible that the CCP conducts hate campaigns against such sportspersons to get back at them for losing, and to provide the angry Chinese public with a distraction.

If Chinese citizens abuse and exhibit their anger against sportspersons, they might not do so with the CCP. That seems to be the thinking behind the Chinese regime’s hateful campaigns against athletes who aren’t able to win gold medals. Yet, the world is now beginning to learn about the inhuman treatment meted out to Chinese athletes, and the same will ultimately result in China being kicked out of global sporting events.